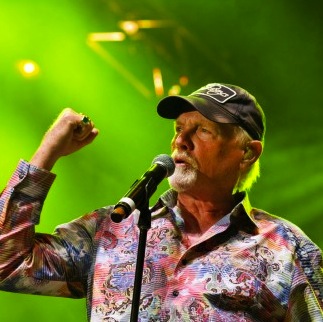 The co-founder of the Californian band tells Kate Whitehead about riding the fame wave.

TAKE IT TO THE BEACH I was born in California, the oldest of six kids. I can’t remember a time in my life without music. Growing up, all holidays – birthdays, Christmas, New Year, Thanksgiving – would be a time when the whole family got together and made music. My cousins – Brian, Dennis and Carl – would be there. In 1961, my three cousins and me and our friend Al Jardine formed the Beach Boys. In the fall of that year we were asked to do a folk song. We told the producer, “We like folk music, Peter Palmer and The Kingston Trio and all that, but we are more into rock and roll and rhythm and blues.” So we came back to them with a song of surfing – Surfin’. Surfing was very popular in southern California. There was a whole group of people who dressed and talked a certain way and had a certain lifestyle and attitude revolving around beach life. We were the first people to sing about the sport of surfing. That was our first song, the first time we had a record that went on the radio. In 1962, we signed with Capital Records and released the album Surfin’ Safari. In 1963 came the album Surfin’ USA.

GOOD CLEAN FUN, FUN, FUN We also loved those wonderful, powerful cars that Detroit was making and we sang about some of our favourite cars, one of the songs being Fun, Fun, Fun, about a girl borrowing her father’s Thunderbird. I collaborated on many songs with my cousin Brian in the first five or six years. When Brian would come up with a song idea, I would come up with some lyrical ideas or concepts or hooks. With the Beach Boys I’ve been primarily a lyricist although I do write melodies. In 1965, California Girls came out and in 1966 Good Vibrations was a big hit. We had a lot of hit records – Help Me Rhonda, I Get Around – in the first half of the 1960s. We had hit records in England, Germany, Japan, Australia, South Africa, the Philippines, Scandinavia and Israel and started getting invitations to go all over the place. We had hit records in Hong Kong in the 1960s. It totally transformed our lives from everyday middle-class kids to a level of recognition and stardom around the world. 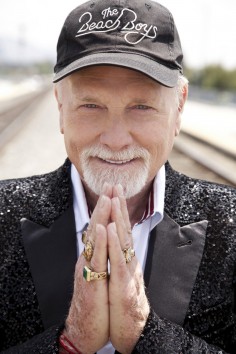 ROCK A HARD PLACE Girls idolised the guys in the group, so it was great to be a young guy who was all of a sudden attractive to all these girls all over the world – that was fun. The 1960s was a crazy time. Because we were so well known and popular, there was the lure of attraction and being attracted to somebody. I enjoyed the life of a rock star for quite a bit of the time, but then I felt it wasn’t really a great life to live, so I chose to settle down with someone. I was married twice in the 1960s and had four children, my two oldest with my first wife and the next two with my second wife. And then I was married again shortly after, in the early 1970s, and had a daughter. In all, I’ve been married five times and have eight kids. I married my wife Jacqueline in 1994 and we have two kids and we’re still together.

OM HOME In December 1967, the group was in Paris to do a Unicef Christmas gala. There were people from all over Europe – the Russian Red Army Choir was there, the Turkish Ballet. Elizabeth Taylor and Richard Burton, and Maharishi Mahesh were in the front row, with John Lennon on one side and George Harrison on the other. It was quite a front row! After that performance, we were taught transcendental meditation by Maharishi. And some time in early January I was invited to go to India. When I got there, the Beatles were there, it was a fascinating time. I am probably the only person who has ever taken beef jerky to an ashram. I lived there as a vegetarian for a month and a half and felt light and great. When I came back to the States, I became strictly vegetarian for a number of years. I meditate every day. If I weren’t able to do my meditation I don’t think I would have been able to do the 175 performances we did last year, because it gives you energy, clarity and deep relaxation. You can actually drop your metabolism to a level of rest twice as deep as deep sleep. It’s profoundly restful. Those extended tours that go on and on do take a toll on a lot of bands. When you resort to alcohol or marijuana to escape or relax there are all these side effects that aren’t great. Meditation has been an enormously positive way of getting rid of the stress and fatigue. Not everyone practices it like I do, so there are people who have resorted to other things both in our group and in others, and a toll has been taken.

MADDING CROWDS It was exciting to be in Czechoslovakia in 1969, six months or so after the Russians had invaded the country. We were welcomed like heroes because we represented America, rock ‘n’ roll and relative freedom. The first time we did a show in Washington DC was in 1980. In 1984, we did Philadelphia in the afternoon – and the paper in Philadelphia said there were 900,000 people on the streets to witness that concert – and that evening we played for about 750,000 people in Washington DC, so in one day we performed live to over 1.5 million people. That was exciting.

THE ONLY CONSTANT … I’m the one guy in the group who has been there since the beginning. Al stopped touring after our first hit record, but came back in a couple of years later. My cousin Carl – he passed away in 1998 from lung cancer – left the group for a couple of years. Brian left permanently, with the exception of a couple of times he’s done some touring here and there, but pretty much he was out of the touring group since 1964. Unfortunately, Dennis passed away in 1983, but prior to that he was having issues with alcohol and drugs and we sometimes had to tell him to get himself together, which he never quite did, which is sad.

I’m looking forward to coming to Hong Kong – we’ll be playing with the Philharmonic Orchestra, which will give a whole other dimension to the Beach Boys’ music. The opening notes of California Girls with an orchestra is fantastic. It’s kind of like an orchestra arrangement how we recorded it, but with a full orchestra it’s beautiful.