Home / Health / The truth about breakfast 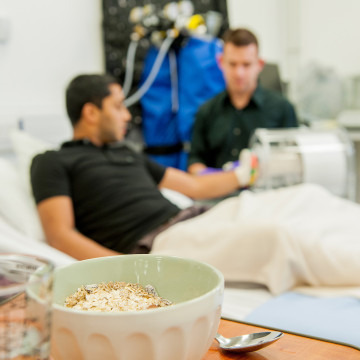 Whether or not you should eat breakfast depends on how active you will be later, lead researcher in comprehensive UK study says. If you aren’t hungry and you’ll be sedentary all day, there may be no need to eat anything

Breakfast is the most important meal of the day – really?

Maybe not as important as people say, according to the latest results from a three-year project by researchers in Britain. The Bath Breakfast Project is being heralded as offering the most comprehensive insights into breakfast eating and its impact on the body.

“I was surprised by how little we know about breakfast. More than any other area of nutrition, the difference between what everyone thinks we know and what we actually know is vast,” says lead researcher Dr James Betts at the University of Bath who last year was awarded the Cuthbertson Medal by the Nutrition Society for his work.

Hongkongers love their morning meal, according to statistics from the Centre for Health Protection. In a survey of 4,253 adults in April 2015, only 4 per cent of respondents had skipped breakfast in the 30 days prior to being polled. This bodes well for Hongkongers’ health, based on the project’s most recent headline finding.

Betts says we need to personalise our nutrition, but adds that this is different from the recent trend of “bespoke meal plans”. By “personalised”, he means that what you eat is dependent on what you do during your day.

If you wake up in the morning and you aren’t hungry and you know you will be sedentary for much of the day, say tied to a desk, then he questions the value of consuming unnecessary calories. But if you know you will be playing sport or exercising later, then it may make good sense to have breakfast even if you don’t feel like it because you might need the energy later.

“Our hypothesis from the start was that the type of activity most likely to respond to eating or skipping breakfast wouldn’t be waking up and thinking ‘I must go to the gym or run for an hour’, but would be the really subtle changes in low-intensity lifestyle activities,” says Betts.

A person – depending on size – uses up about a calorie a minute in a sedentary state. Given that there are 1,440 minutes in a day, that explains why the average resting metabolic rate is about 1,500 calories a day.

While most people think they only start expending calories when they are exercising, he notes you can actually clock up a large energy expenditure just by exchanging sedentary activity for very low-level lifestyle activity.

Eating breakfast causes obese people to be more active, according to a recent report by the Bath researchers published in the American Journal of Clinical Nutrition. The study analysed the links between breakfast and health for people classed as obese, comparing the results from a fasting group with a breakfasting group.

The key insight: eating breakfast did not make obese people lose weight, but did result in more physical activity in the morning and reduced food intake later in the day, meaning that both groups ate similar amounts overall.

The message from this, the researchers say, is that increasing activity is one of the most important ways to improve health in our increasingly sedentary population.

Another commonly held belief is that breakfast helps kick-start your metabolism. Betts disagrees, saying the impact is minimal – data shows a difference of three to 10 calories in resting metabolism.

There is a slight increase in metabolism directly after a meal – known as dietary-induced thermogenesis – which Betts says is predictable, with most people expending 10 per cent of the calories received from the food.

As to why so many of us hold the conviction that breakfast is the most important meal of the day, Betts points to a study by the University of Alabama at Birmingham (also published in the American Journal of Clinical Nutrition) that took a sociological approach to the question and concluded that the blame should be shared equally between scientists, the media and the public.

“The researchers found that lots of scientists that use a cross-sectional approach inappropriately use causal language, and journalists are seeing papers that ostensibly show cause and effect. Then there’s the breakfast industry that has an incentive to get the message out about breakfast,” says Betts.

Many people in their 40s and 50s will have grown up with parents quoting the adage: “Eat breakfast like a king, lunch like a prince and dinner like a pauper.” That’s the advice popular American nutritionist Adelle Davis laid out in her 1947 book, Let’s Cook it Right.

There seems a simple logic to the statement – eat more in the morning and you’ll have all day to burn off the calories, but Betts says it’s not helpful to measure energy balance on a daily basis.

“Feeling full due to the food in our bellies or the effect of hormones doesn’t always achieve our energy balance on a daily basis. It happens over many days,” he says.

He believes the solution to obesity lies in looking at both sides of the equation: calories in and calories out. This is because of the body’s compensatory mechanisms, whereby if you eat more or less your body will naturally do more or less. Equally, if someone is prescribed two hours exercise on a treadmill each day, they will naturally compensate by eating more.

However, based on the markers of a healthy lifestyle such as being more active and controlling blood sugar levels, there is evidence that eating breakfast may help.

“If you have breakfast, take advantage of the fact that you will be more active. And if you’re fasting, be aware that you are naturally going to be less active and try and cut corners where you can,” says Betts.

“Perhaps caffeine could increase physical activity levels without the need to take in calories,” says Betts, who has a background in sports nutrition. “[Caffeine] is one of the most versatile and effective supplements out there for taking part in exercise – it motivates you, stimulates strength, speed, and endurance performance. It’s really quite beneficial.”

3 Skipping breakfast causes the brain to be more responsive to highly palatable foods.

2 People who have breakfast have a faster resting metabolism.

3 Skipping breakfast results in a crash in blood sugar and lack of energy.