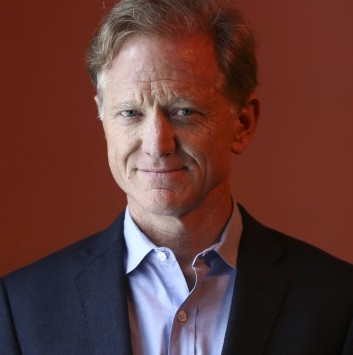 The American director talks to Kate Whitehead about the Sundance Institute, how he ended up making films, and why his son’s dyslexia was the trigger for ‘probably the most important film I’ve ever made’

INSIDE STORY I grew up in Manhattan, left at 18 and never went back. As an undergraduate I really liked literature and writing; I started out writing short stories. I got a master’s degree in literature from Northwestern University (in Illinois), but I lost interest in the academic setting. I hung in there and got the degree because I didn’t want to be a quitter, but I knew, even in the midst of it, academia wasn’t for me because storytelling wasn’t the point, criticism was the point. Then it was a matter of finding out what kind of career I could do if I really like storytelling.

SUNDANCE KID As a college student in 1985, I was at this non-profit called the Sundance Institute, which was having summer retreats for filmmakers at the Sundance Resort, in Utah, which my dad (actor and director Robert Redford) owns. It was a humble affair in the mid-1980s. There was a festival in Utah that was going to be shut down so the institute thought it would be fun to have a little venue and show a couple of movies. The first year it was just one theatre, a banner outside, I think they were giving tickets away. Now, you’ve got 40,000 people arriving in Park City for the festival. It’s become a powerful thing. Over the years I’ve had a number of projects shown there. It’s hard, most people assume if my film is there that it’s a matter of nepotism – and if they don’t get in then it seems to be an extra stamp of disapproval, right? So you can’t win. But, you know, there is a double-blind system to selection.

WRITE DIRECTION I didn’t think of screenwriting until I left academia and then I wrote a screenplay out of frustration and found I love the form. The first screenplay was a short piece for a TV show about twins who plan to get out of prison by switching identities – it was terrible but I loved the process. I started writing and writing and, by the 1990s, I was getting jobs as a screenwriter. I came to realise that during the execution of a movie any number of things will alter the script; it won’t look like your script, for better or worse. It won’t look like your story unless you direct it. So I got into directing and really liked it. My first documentary was driven very much by personal experience.

SECOND LIFE As a child I had an autoimmune disorder that wiped out my liver. By the time I was 30, I needed a liver transplant; I was dying. I had the harrowing experience of wondering whether or not I would get a transplant in time and waited nine months or so. In 1993, there weren’t many people who got transplants. Finally, when I recovered, I was struck by the fact that organ donation was associated with creepy stuff. Think about Frankenstein, he was really your first organ transplant. Transplantation had enormous barriers to overcome early on – it was eerie, scary, connected to death and tragedy. I decided to make a documentary about the people who donate organs. The Kindness of Strangers came out in 1999. That experience was rewarding on a creative level; the idea that you could engage a storytelling craft and push the societal bar forward – or at least feel that you were.

SCHOOL OF THOUGHT I met my wife, Kyle, in college. We were together throughout my health travails. We have two children – Dylan, who is 24, and Lena, who is 20. Kyle has been a teacher for 28 years. She is a committed educator and a blogger for The Huffington Post and Education Week. She was quick to realise something was going on with Dylan when he was young. He had a lot of typical signs of dyslexia: poor handwriting, his recall in terms of certain kinds of spelling wasn’t there. When you are six or seven, you are dealing primarily with the mechanics of learning rather than content; it was a hard time for him. We had him evaluated and the diagnosis was more liberating than we thought it would be, particularly for our son. The minute we heard the word there was a sigh of, ‘OK, at least we know what it is.’ As parents, it’s our firm belief that assessment, diagnosis, open discussion and owning it is important.

THE BIG PICTURE For me it was an opportunity to make probably the most important film I’ve ever made – The Big Picture: Rethinking Dyslexia. When Dylan agreed to be in the movie we had no idea it would be so popular; it ended up premiering on HBO. It’s now pretty well established that there is a high prevalence of dyslexics in the creative community and, surprisingly to me, running Fortune 500 companies. It has to do, we suspect, with making connections at a very high level and an ability to get to the core issues in a quick way, solving problems very early on. Often I feel that, in the film community, it’s one in two people who are dyslexic instead of one in 10.

LOTS IN A NAME Because of my name, there’s no question, when it comes to getting a meeting, that it’s been easier, because people are curious about who you are. But when I look at what actually led to something substantial, it was never because of that. I have probably had a lot more meetings than most people, probably wasted a lot of my time and other people’s. Movies and features are expensive and having a famous last name isn’t thrilling enough to spend a million dollars on a project.

FILM FOCUS I have a company called KPJR Films, with Karen Pritzker. In the last three years, we’ve made two films – Paper Tigers and Resilience – dealing with adverse childhood experience and toxic stress. As with dyslexia, we were compelled with where emerging science has the ability, if you understand it, to make a big change. We now understand children who are exposed to violence, abuse and neglect at a young age. (Such treatment) affects their development not only neurologically and psychologically, but their biochemistry as well. It alters their brains and bodies and makes them more susceptible to a host of health problems. My other company is called the Redford Centre and that’s a non-profit content company. We are trying to redefine social-purpose filmmaking, trying to work out how to address environmental issues with an engaging approach to pull people in rather than scare them away.

This has been my first trip to China and I’m absolutely blown away. Sitting on the balcony of my eco retreat along the Yulong River, in Yangshuo, staring into the mystical mountains and watching people float by on their rafts was heaven – the most serene I’ve felt in a long time.