Home / Health / Strip off and float away 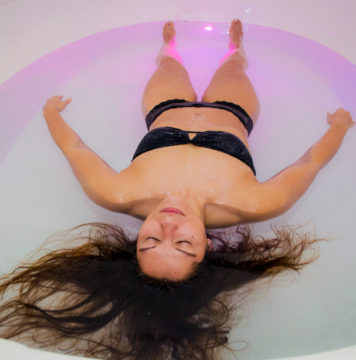 Enter a flotation tank and you can separate your mind from your senses in complete safety and come out with silky smooth skin.

Imagine being totally free of gravity and floating in pitch black silence. It sounds like something only astronauts get to experience, but I did it last week. Twice. No spacesuit involved. In fact, I was in my birthday suit.

This is how it works: a tank is filled with water to a depth of 30cm and then 500kg of Epsom salts are added – this makes it even more salty than the Dead Sea, which helps with floating. The water is heated to 35.5 degrees Celsius – roughly the same temperature as your skin – so when you’re in the tank it’s hard to tell which parts of your body are submerged and which are not, giving the sense that you are floating.

Add to this floating, weightless feeling the fact that the tank has a door that can be shut, enclosing you inside the pod-like capsule and in total silence. There’s a button within easy reach that allows you to turn off the lights. Pitch black. Welcome to the void, where not only are there no tablets or screens to distract you, there’s nothing of anything.

I can’t say it wasn’t weird. First of all, I had some serious reservations about getting in a tub of water that total strangers had been wallowing in. I was assured that everyone is requested to take a shower before getting in the tank (we’ll just have to trust that everyone does this) and that after each session the water is filtered, removing stray hairs and bits and pieces.

“But what if someone pees in there?” I ask.

“We’ll know; the water will change colour,” comes the reply.

Isn’t that what adults tell kids to stop them peeing in swimming pools? And we know that no such thing existed; it was just a ploy to frighten children into behaving. (When I discuss this with a 40-year-old friend, however, I discover she’s still under the impression that such a chemical exists and is added to pools, such is the strength of that childhood threat).

As a final token of reassurance, I’m reliably informed that the water is saltier than the Dead Sea and nothing (by which I assume we’re talking germs, bacteria and other nasties) can survive in it. 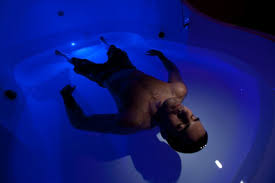 So that’s what I was mostly worried about as I climbed into the tank. Those who get claustrophobic might be a little uncomfortable about shutting themselves inside the tank, but I didn’t mind that (I’m fine with MRIs, too) and had no reservations about pulling down the heavy door. The tank is big enough that even with the door shut you can sit up quite comfortably.

Before my shower I’d put in the earplugs provided – this is an absolute must unless you want water (and lots of salt) in your ears. The floating part was very cool. I’ve been to the Dead Sea and this was even more fun. Once the lights were out I did get butterflies for a minute or two as I lost my sense of direction – which way was up, where was down? Which body parts were in the water and which were out? I felt for the side of the tank and got my bearings.

And then something happened that no one had warned me about – I saw pinpricks of light above me, bright yellow dots against the blackness. It looked like the night sky over a desert. I’ve since learned that when we are deprived of external stimuli our brain generates its own, so my visual hallucinations – the stars – were most likely down to sensory deprivation.

So far it probably doesn’t sound very relaxing, but that’s just because any new experience takes a little getting used to. After 10 minutes in the tank I’d found my most comfortable position – hands behind my neck – and totally relaxed. The rest of the hour slipped by and, while I didn’t fall asleep, I felt very rested.

Some people do sleep during their tank time. It’s apparently impossible to drown, partly because the water is so shallow and also because the density of the solution will always support you. If you were to flip over, the super salty water would sting your eyes and wake you up.

That said, a 30-year-old British man did drown – the first and only case – in 2008. An inquest into his death learned that he had taken the drug ketamine – an anaesthetic – before getting in the tank.

So why do it? The chief reason is for relaxation – and a truly deep sense of relaxation can be achieved in the tank. You are in a totally private space – the tank is in a private room, you lock the door – and deprived of light, noise and other stimuli the brain slows down and you slip into a semi-dream state. This is shifting from the “alpha” state to where the brain is generating “theta waves”, the state of mind that Buddhist monks strive for.

Stress, we are told, is the silent killer. Flotation therapy has been shown to reduce blood pressure and lower cortisone levels, improve sleep quality and help with recovery from jet lag, help in the relief of migraines and muscular pain caused by anxiety. In fact, reducing anxiety is one of the big draws.

The flotation tank is nothing new – it was developed in 1954 by an American neurophysiologist, Dr John Lilly, who was curious about the origins of conscious activity in the brain. His first tank involved the user being suspended upright, entirely underwater, and using a mask and breathing tank to breathe. Dr Lilly kept tweaking his tank, included Epsom salts and water heaters, and by the early 1970s he had created the tank which is used today.

I remember seeing them advertised in Brighton, England, in the late 1980s. And then they seemed to fall out of fashion – apparently this was partly over concerns about Aids and how the virus was spread. But they’ve gained in popularity in recent years, and last year two flotation centres opened in Hong Kong within weeks of each other – in Happy Valley and Mid-Levels.

The two centres use the same style of tank and the set-up is similar. The Happy Valley centre – Zero Gravity Floatation (HK$1,980 for three 60-minute floats) – has two tanks, each in a large private room with shower and dressing area. It is very quiet; they’ve even installed an anti-vibration mat under the tank so you can be totally cut off from the outside world and all noise and distractions. There is a small area set aside for drying your hair and pampering after your float.

The Mid-Levels centre, Float On, has four tanks (60-minute membership: single float HK$550/ month and double float HK$1,000 month). Clients are offered a cup of tea in a casual sitting area with beanbags and a chance to slowly return to the real world post-float.

Both centres reported that they have more male clients than female. I was initially a little surprised about this; after all, women do tend to spend more on health and beauty treatments. But lying in the darkness of my flotation tank it made sense: this was the ultimate “man cave”.

Both men and women will appreciate that, unlike lying in a bath for an hour, which leaves your skin puckered and wrinkly, after 60 or even 90 minutes in a flotation tank your skin is soft and silky. This is because the water contains such a high level of salts it doesn’t rob your skin of salt, which is what causes wrinkling.