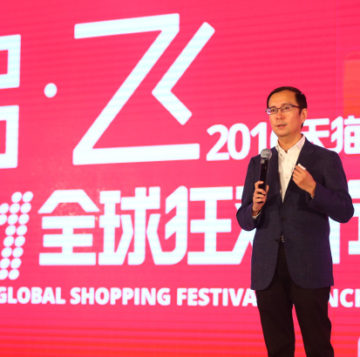 The group estimates that about 40,000 merchants will participate in this year’s festival, including luxury brands such as Burberry, Paul Smith, Estee Lauder, L’Oreal and Guerlain.

The one-day Singles’ Day shopping event is held annually on November 11. It began at Alibaba in 2009 with just 27 merchants and has grown to a multi-billion dollar business. And this year is set to be its most global ever with more opportunities for consumers to buy from global merchants.

“The event has become the global retail benchmark over the past seven years. We have raised the bar again this year to redefine retail experience for consumers and merchants around the world,” said chief executive officer Daniel Zhang.

The group estimates that about 40,000 merchants will participate in this year’s festival, including luxury brands such as Burberry, Paul Smith, Estee Lauder, L’Oreal and Guerlain.

This was the first year that the festival has been launched outside Hong Kong and the occasion was marked with the arrival of four auspicious lions who performed a traditional lion dance that ended with the mythical creatures leaping into the air to form the numbers 11.11.

Jack Ma, who was not at the event and who founded the firm in 1999, has made clear that globalization continues to be the driving force behind Alibaba. This year sees the November 11 event opening up Hong Kong and Taiwan as the first markets where consumers will be able to buy international products via Tmall.

More than 100 brands, including La Perla, have joined the “Sell Globally” pilot program and will offer products to Hong Kong and Taiwan consumers during the festival.

The announcement of the world’s first end-to-end virtual reality shopping experience created a buzz at the Hong Kong event. Building on existing VR technology released in March, the “GnomeMagic Lab” will allow the entire transaction – from browsing to ordering and payment – to be completed within the VR environment.

From November 1 to November 11, consumers can use the group’s Buy+ service at home with the support of a VR headset or mobile phone attached to a VR Cardboard. Among the eight big brand stores in the U.S., Australia and Japan included in the 11-day virtual shopping fest are Macy’s and Matsumoto Kiyoshi.

Among other moves to boost the shopping experience is the introduction of livestreaming to encourage consumer engagement.

“If you are sitting at the counter with the Estee Lauder beautician holding your hand you will probably buy the product. Now people all over China, our VIPs, can real-time interaction with the best beautician Estee Lauder has,” said Jet Ling, Alibaba Group vice president.

The group is also making big data work hard. Data about everything from product recommendations to search results and newsfeeds will allow consumers to have a highly-personalized shopping experience and give brands and retailers the ability to customize their storefronts and better target their marketing materials.

“The omnichannel is based on big data systems and will help merchants to expand their connections,” said Ling.

Last year Estee Lauder was the first “traditional merchant” to work with Alibaba to create a fan club. This year more than 370 merchants hope to will launch fan clubs during the festival and host fan parties, said Ling.