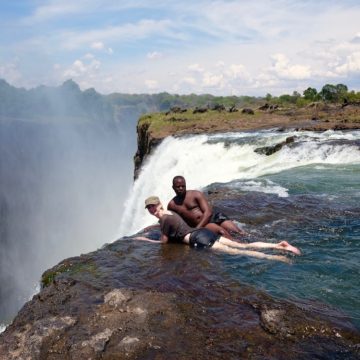 I haven’t got a natural head for heights, so leaning over the edge of Victoria Falls and gazing into the boiling chasm already has my heart racing. Then I spot a double rainbow crisscrossing the gorge below just as something nibbles at my feet and I feel a surge of adrenaline. There’s nothing like a magical moment combined with a near death experience to really feel alive.

The aptly named Devil’s Pool is the ultimate thrill-seeker’s in nity pool. It’s just off Livingstone Island, the place where the Scottish missionary turned explorer Dr David Livingstone rst glimpsed the falls.You can only visit it in the dry season – September to December – when the water level drops enough to expose the rocks at the top of the falls.

The buzz of sitting on the edge of the world’s biggest waterfall while young tiger sh nibble at your feet more than makes up for the fact that the falls are not at their fullest. Actually, there’s never a bad time to visit. The best views are enjoyed in January and February and in Mid-July to September when the water ow isn’t at its peak. (When the river is at its highest, from April to June, the spray often blocks the views of the falls.)

You can see the falls from miles away – the force of the water throws a cloud of vapour two kilometres into the sky. From a distance the massive plume of spray looks like smoke. Indeed, the indigenous name for the falls is Mosi-oa-Tunya, which translates as The Smoke That Thunders. 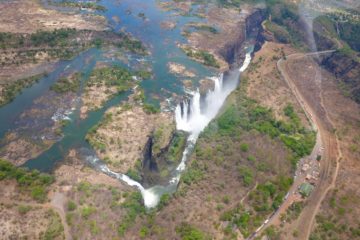 A dip in Devil’s Pool is just one of a string of options for adventurous souls.You can also whitewater raft down the river, bungee jump, abseil off the 111-metre- high Victoria Falls Bridge or do a Gorge Swing across the river – all good reasons why the area has earned a reputation as the adrenaline centre of Africa.

A helicopter ride is a great way to get a sense of the scale of the falls, one of the seven natural wonders of the world. More than 1,700 metres wide and 100 metres high, it’s only from the air that you can really appreciate its enormity. The pilot begins the 15-minute journey going east along the river before circling twice over the falls. It’s a chance to stare right into the belly of the beast – it looks as though a giant pickaxe has been taken to the earth, splitting it open. Then we return along the river – the pilot dipping over a pod of hippos – and over the Mosi-oa-Tunya National Park.

You need not exert yourself to appreciate the falls. A wonderfully peaceful path leads through the rainforest to a spectacular view of the thundering water, allowing you to drink in the view and perhaps re ect on Livingstone’s journal entry on the falls in November 1855:“Scenes so lovely must have been gazed upon by angels in their ight.”

Victoria Falls grabs the limelight, and with so many ways of experiencing it it’s easy to spend several days locked in awe, but there are lots more things to do in the area. The closest town to the falls on the Zambian side is Livingstone, named after the Scottish explorer. The fact that the town has kept its name while all the other old British names were replaced once Zambia gained independence in 1964 is testament to the respect Zambians have for Livingstone. He not only put the Victoria Falls on the world map – naming it after his queen – but also led a crusade against slavery.

The town itself is an interesting place to visit. Founded in 1905, a safe distance from the swampy, mosquito-infested banks of the Zambezi, it became the capital of Northern Rhodesia in 1911. With the capital moved to Lusaka in 1935, it has managed to retain much of its colonial character. The main road is lined with the original buildings – many with delightful art-deco features.

Just off the main drag is Livingstone Museum, the oldest and largest museum in the country.You could easily spend a day here – there are several wings covering natural and human history, archaeology and ethnography. The David Livingstone section is well worth some time and has plenty of Dr Livingstone memorabilia, from original letters to maps and personal effects. Also worth a closer look is the section on the “Dark Arts”. It’s a rather spooky if not downright sinister collection of witchcraft curiosities, from cursed dolls to potion pots. There’s even a snakeskin belt that allegedly enabled a sorcerer to have sex with a man’s wife while he lay sleeping next to them. Bizarre stuff.

If you want to get off the tourist trail and get a local perspective on life in Zambia, take a stroll through Maramba market. It’s a very local affair, so probably best not to parade expensive camera equipment or other luxury goods around, but is otherwise very safe to visit. In fact, Zambia is one of the safest nations in Africa according to the World Economic Forum.

You can buy almost anything at Maramba market; as well as fresh sh, meat, vegetables, cooking oil and clothing, there are stalls selling car parts, bikes, beds… and there are plenty of second-hand items for sale as well. For those of us used to squeaky clean Western supermarkets the ies buzzing over the fresh food might come as a shock, as will the bucket of dried Mopane worms, a delicacy in Africa and high in protein.

There’s no missing the Chinese in uence in the country – a growing force for more than a decade. In 2004, Zambia secured a US$28.8 million World Bank loan to diversify its economy, and tourism was highlighted as a key sector. Tenders were put out to resurface Livingstone’s main roads, install street lighting to increase safety, and improve the drainage system so the town wouldn’t ood during the rainy season when tourist arrivals peak, the visitors drawn to the thundering falls. Most of the tenders for contracts were won by Chinese companies – in part because of their reputation for delivering on time, and because they are favoured politically. So strong is Chinese in uence in the country that Zambia’s most popular national newspaper, The Post, publishes two pages in Chinese every day.

Not everyone is happy about the Chinese in uence. As we drive to the River Club, my digs for the night, my Zambian driver shares that many are worried about China’s rapidly growing in uence.“They [re]built Livingstone and now they are trying to buy the whole country,”he says.

He’s equally dismissive of Chinese workmanship, pointing to tar that has bubbled up and dried at the side of the road. Apparently the Chinese hadn’t taken account of the seriously hot African summer and the new road began melting within three months of being laid.

We drive through Mosi-oa-Tunya National Park, passing the odd hippo munching on the grass – the dry season is coming to an end and the rst rains have given rise to new growth by the side of the road. The River Club is on a high bank overlooking the Zambezi River. The main building, a renovated 1940s farmhouse, is surrounded my manicured lawns – there’s even a croquet circuit marked out on the grass. It’s like stepping back in time. Guests are accommodated in ten chalets, each with a four-poster bed and its own plunge pool. Instead of a wall, the front of the chalets are faced off with mesh so that you look directly out onto the river. It’s like a four-poster bed version of“glamping”– but with your own bath, shower and toilet.

The River Club’s owner Peter Jones is one of the few lodge owners who still regularly join guests for dinner. Born and raised in Zambia, he’s a history buff and has plenty of stories to share about the area. He has also used funds raised from the property to help improve the lives of locals in the neighbouring village (from where a number of his staff come), including building a couple of wells so that the women no longer need risk the crocodiles by going to the river to fetch water.“It’s important to give back to the community – everyone’s lives in Africa should improve, not just the lucky few,”he says.

Like many of Livingstone’s luxury lodges, the River Club lays on a sunset cruise for guests. We sip on our gin and tonics and watch the wildlife as it comes down to the river – there are elephants, hippos, crocodiles and a whole family of baboons. After an action-packed day it’s a great way to unwind.

Later that night, with a full lodge dinner and a couple of wines inside me, I’m drifting into a peaceful sleep when I’m startled awake by a loud grunting noise. I sit up in my four-poster and stare into the darkness; it comes again, a deep guttural sound that reverberate in my chest. It’s a moment before I realise it’s a hippo wallowing in the river just beyond my chalet… my last adrenaline kick of the day.