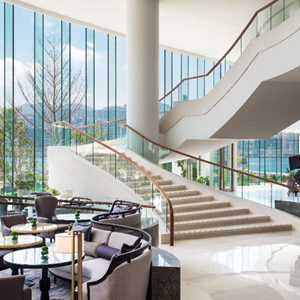 Hongkongers will be familiar with The Upper House, the hotel in Pacific Place that opened in 2009 and propelled Andre Fu into the big league. He has worked on a string of luxury hospitality projects in the years since and among key completions this year is the Kerry Hotel, the first new hotel on the Kowloon waterfront in 20 years.

Beginning business in early May, the 16-storey, 500-room property, situated beside the Hung Hom ferry pier, aims to make the most of its harbour location. Designed by architect Rocco Yim and interior designer Andre Fu, it was conceived as an “urban resort”, with a large terrace to encourage alfresco dining.

“The Kerry Hotel is to do with being absorbed into the openness of the environment – the soft silhouettes, the curvature and the general flow of how the outdoor and indoor is almost blurred into one,” Fu says.

Curved Turkish onyx in the lobby is suggestive of the movement of water and feature screens in some of the guest rooms show a ripple pattern, a watery effect that is echoed in the detail on the carpet.

Keeping with the watery theme, the colour palette for the guest rooms is mineral blue.

Aimed at the business and leisure market, it is the dramatic Grand Ballroom that will likely garner most attention. At 1,756 square metres, it can accommodate more than 100 tables and is the largest hotel banquet space in Hong Kong. The sheer size of the hotel presented the biggest challenge. 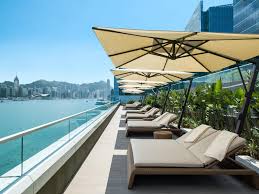 “People appreciate the scale of a project, but at the same time when they are actually in a restaurant in a particular area they want to feel intimate, that they are nestled in their own space,” Fu says.

At the other end of the scale and on the other side of the world, Fu recently completed work on Villa La Coste, a 28-villa luxury hotel inside the Chateau La Coste vineyard in Provence, France. He and his team worked on the salon, bar, library and fine dining restaurant, Louison.

The vineyard’s owner, Patrick McKillen, is passionate about art and architecture. Works on display include those by such household names as Ai Weiwei, Kengo Kuma, Tadao Ando (who designed The Art Centre), and Renzo Piano (who was behind the estate’s photographic gallery).

“This is a very niche market – it’s aspirational, out of this world. The owner has such a big collection of art it is a very personal project,” says Fu, who met McKillen, one of the owners of the Berkley Hotel in London, when he designed the luxury Opus Suite for the same hotel in 2014.

The salon, bar and library, at the garden level of Villa La Coste, are warm and inviting spaces. Solid aged timber wood and brushed Botticino Crema marble create a contemporary setting. A centrepiece in the room salon is a sculpture by the British artist Tracey Emin.

Art is also central in the Louison Restaurant, a modernist free-standing pavilion that appears to float above a pond. Suspended from the ceiling in the centre of the room is a silver sculpture by Louise Bourgeois.

“I saw my role as creating a sense of intimacy, of relaxed luxury, designing these spaces for people rather than as spectacles in themselves,” Fu says.

Many will be familiar with Fu’s high-end hospitality projects – think the Fullerton Bay Hotel in Singapore – but he has also collaborated with luxury Hong Kong custom carpet maker Tai Ping. His first carpet collection in 2012 and this second collaboration capture the spirit of city living.

“We call it the flaneur spirit – wandering in the city and being absorbed in silhouettes and sounds and imagery of a city,” Fu says. “It’s not specific to Hong Kong or Tokyo – it’s about our daily lives. Our daily memory is made up of all these silhouettes of being in a car, driven past buildings, seeing reflections of the buildings through the glass, silhouettes of the trees in the park.”

“The goal is to develop relationships with key artisans that I admire to create special collaborations,” Fu says. “I enjoy learning from artisans and seeing what this chemistry and my aesthetics can provoke.”