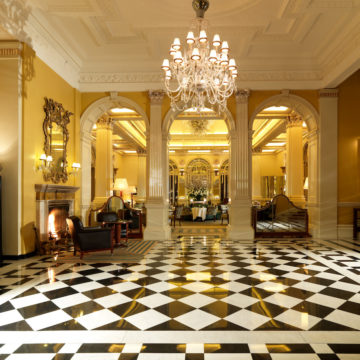 If walls could talk

The very nature of hotels lends them to mystery and intrigue. These temporary homes of the rich and famous – and anyone who can afford it – have seen plenty of exciting dramas play out over the years. It’s fun to walk down the same corridors, perhaps even share the same pillows, as the big names in history.

I never met the late North Korean leader Kim Jong-il, nor was it high on my agenda, but a couple of years ago at a homestay on Mt Chilbo, in hushed whispers was told by the homeowner that the great leader had slept in the bed I was about to sleep in. Yes, I slept in Kim Jong-il’s bed. These remote brushes with the once powerful, beautiful and rich earn bragging rights among your friends. Rubbing up against history like this

is far more fun than visiting a museum – and certainly more comfortable – so where should you go if you want to get up close and personal with some exciting people and moments from the past?

Claridge’s, the grande dame of fine hotels just off Oxford Street in London, has hosted royalty since the very early days. In 1860, Empress Eugenie of France stayed over winter and entertained Queen Victoria at the hotel. That cemented its reputation as some very posh digs and it hasn’t looked back. Even World War II didn’t keep the royals away, in fact several royal families and heads bunkered down at Claridge’s having been exiled from their homelands.

Queen Wilhelmina of the Netherlands and Prince Bernhard sought refuge in the basement of the hotel whenever London was bombed. They were not alone. The Kings of Norway, Greece and Yugoslavia all had a residence in Claridge’s. The story goes that when people would ask for the king on the phone, the operator would ask: “Which one?”

Peter II of Yugoslavia and his wife stayed in Suite 212, and their son was actually born in the hotel room in July 1945. The new parents were upset that their exile meant the heir to the thrown would not be born in their native land. Prime Minister Sir Winston Churchill came to the rescue. He declared Suite 212 Yugoslav territory and legend has it that a spadeful of Yugoslav earth was put under the bed so that the Crown Prince Alexander could literally be born on Yugoslav soil.

Churchill and his wife Lady Clementine were living in Claridge’s at the time. After losing the general election on July 5, 1945, and finding themselves temporarily without a home, they took up residence in the sixth- floor penthouse suite. Lady Clementine loved their new home, but Churchill was apparently uncomfortable about living so high up.

And after the royals came the celebrities and entertainers. American actor Spencer Tracy famously said that he’d rather go to Claridge’s than to heaven when he dies. Despite the opulence and grandeur, or perhaps because of it, Claridge’s has always maintained its reputation as a place to party. Kate Moss’ 30th birthday party at Claridges – themed ‘The Beautiful and the Damned’ reportedly deteriorated into some very rock ‘n’ roll behaviour.

The Ritz has been a byword for luxury since it opened in 1898. It was the first hotel to have en-suite bathrooms, telephones and electricity in every room. And with the luxury came some high-rolling guests with expensive, and sometime eccentric, tastes. The glamorous Marchesa Casati kept two pet cheetahs in her suite. And as if that wasn’t enough wildlife, she also had a pet python that she kept drugged and would wear out, wrapped around her neck. The bar staff apparently sent up live rabbits to feed the snake.

he war years didn’t put a stop to all that glamour. But it’s no wonder the hotel doesn’t like to talk about this period – it became the home of the enemy. When the Germans took Paris in June 1940 the Luftwaffe, the air force of Nazi Germany, set up its headquarters in the hotel. Declaring themselves guests of the French people, the Germans gave themselves a 90 per cent discount. The Luftwaffe chief Herman Goring took the opulent Imperial Suite and lived a debauched lifestyle in those rooms. He had a penchant for cross-dressing – lavish silk-trimmed gowns, diamond earrings and perfume – and was so addicted to morphine tablets a doctor had to be called regularly to treat him.

While the war raged outside, the Ritz was still serving steak topped with truffles in its dining room. The Germans invited in some high-pro le Frenchwomen as lovers. The French actress and singer known only as Arletty stayed at the Ritz with her Nazi boyfriend. And the designer Coco Chanel, who ended up living at the Ritz for more than 30 years, spent the war years being pampered in luxury thanks to her Nazi of cer lover Hans Gunther von Dincklage.

Perhaps the best account of all that happened during the war years is the tale of Ernest Hemingway personally liberating the bar as the Nazis were retreating. Having been working as a war correspondent he got news of the end of the war and jumped in a jeep full of stranglers from the war and zipped up the Champs-Élysées and stopped outside the hotel. He led the motley crew into the bar, proclaimed its liberation, and ordered champagne for everyone. Little wonder the bar was renamed the Bar Hemingway. www.ritzparis.com

In 2014, when the ‘eternal bachelor’ George Clooney decided to marry he chose a palace on Venice’s Grand Canal to host his wedding reception. The seven-star property had only served as a hotel for a year, but it was no stranger to lavish parties. Formerly the Palazzo Papadopoli, the 450-year-old palace has a reputation for hosting some legendary parties.

The Coccina family who were wealthy traders and seafarers built the palace in 1550. On the death of Francesco Coccina, the last descendent, the palace was sold to the Tiepolo’s in 1718. This family was not only wealthy, but cultured, and created an impressive library, lled the palace marble statues by Canova and frescoes. Although the statues have long since gone, the frescoes remain and on their honeymoon night the Clooney slept beneath one of these impressive ceiling frescoes in the Alcova Tiepolo suite.

The Clooneys were not the first celebrity couple to spend their wedding night at the palace. In April 1929, the beautiful young Countess Nicoletta Arrivabene married Count Edoardo Visconti di Modrone, brother of the filmmaker Luchino Visconti, in a lavish wedding in Saint Mark’s Square. The bride was dressed in an exquisite long white robe designed by Jean Patou (who some assumed she would marry and who died tragically seven years later) and the couple settled into the palace beside the canal. They lived in absolute luxury and were attended by 85 waiters – one of the attendants was solely in charge of looking after the palace’s clocks. www.aman.com

The reputation of this iconic New York hotel was built not on its luxurious accommodation and impressive service, but on the people who stayed there – the artists, writers, actors, musicians and filmmakers. If walls could talk you would hear some very colourful stories. Fortunately, artists are compelled to tell their stories through film and song, so we’ve got a good idea about some of the debauched behaviour that took place in this 12-storey building on 23rd Street in Chelsea.

Many of the Beat Generation writers lived and worked in the Chelsea Hotel – think Alan Ginsburg, William S. Boroughs and Herbert Huncke. In 1953, poet Dylan Thomas famously downed 18 straight whiskeys at a nearby bar, collapsed in a coma back at the Chelsea and was pronounced dead in hospital. Another poet, Bob Dylan, wrote his classic song Sara, immortalising the hotel with the line: “staying up for days in the Chelsea Hotel, writing Sad-Eyed Lady of the Lowlands for you.”

Leonard Cohen stayed in Room 222 and his liaison with Janis Joplin, who he ran into in the lift, will never be forgotten thanks to his song, Chelsea Hotel #2: “I remember you well in the Chelsea Hotel, you were famous, your heart was a legend. You told me again you preferred handsome men/but for me you would make an exception.”

The hotel was a magnet for creative types with a bohemian spirit and sometimes those who just wanted a license to do what they wanted. Madonna lived in the hotel in her youth and returned in 1992 to shoot photographs for her book, Sex. And when Ethan Hawke split up with Uma Thurman, he checked into a two-room apartment at the hotel and made the movie Chelsea Walls.

And perhaps the most violent story, certainly the most notorious, is that of what happened in Room 100 on the night of October 12, 1978. Nancy Spungen was found stabbed to death in the bathroom of the apartment she shared with her boyfriend Sid Vicious from the Sex Pistols. The hotel closed in 2011.