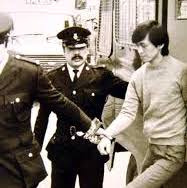 There are a handful of Hong Kong crimes that have slipped into local folklore and are best known by their monikers. Most famous are the Hello Kitty Murder (1999) and the Milkshake Murder (2003), but long before these there was the Jars Killer.

Lam Kor-wan is now 62 and serving a life sentence at the maximum-security Shek Pik Prison on Lantau Island for a string of grisly murders in the early 1980s. He holds the dubious distinction of being Hong Kong’s first serial killer and his reign of terror came to an end 35 years ago this week, when he was apprehended on August 17, 1982, at the age of 27.

Most press coverage at the time focused on the macabre details of the case – women’s sexual organs preserved in jars of formaldehyde, necrophilia and reams of pornographic material. It’s hard to feel anything but repugnance for a man who committed such monstrous murders, particularly one who showed no remorse, but consider the kind of person he was.

Lam had always been a loner. When he was growing up in Malaysia, his father used to beat him and his mother. He once hit Lam so hard that the boy was knocked unconscious. The abuse stopped when they moved to Hong Kong and Lam was in his teens, but he had trouble making friends at school; his electronic chess set was his closest friend. As an adult he got a job as a taxi driver and chose to work the night shift because it suited his temperament. He continued to live in the family home in To Kwa Wan, sharing a room with his younger brother.

Lam was obviously not a happy, well-adjusted man. This goes some way to explaining what happened just before 4am on February 3, 1982, when he picked up a woman passenger in his taxi outside a restaurant in Tsim Sha Tsui.

Chan Fung-lan worked at the Chinese Palace Nightclub and had gone for drinks and a snack with her sister and a couple of friends after work. She was drunk and part way through the journey told Lam to stop. He pulled up at a service station and she opened the door and vomited onto the street, then told Lam she wanted to return to Tsim Sha Tui. A few minutes later she changed her mind again.

Something in Lam snapped. He pulled over and strangled Chan with a length of electrical wire.

This first murder wasn’t planned, but the way it unfolded set the pace for events that followed. Over the next seven months, Lam killed and dismembered another three women, and took photos of their bodies. When Lam was arrested for his crimes, investigators wondered whether he had wanted to be caught – one even suggested he got a kick out of taking that chance. Lam’s riskiest move – the one that led to his arrest – was getting his pictures developed at a photography store.

He had a narrow escape one time when a technician questioned him about the photos of dismembered limbs and cross-sections of joints. However, he accepted Lam’s explanation that he was a university lab technician and the pictures were for medical research.

But Lam wasn’t so lucky on August 17, 1983. The technician did a double take when he saw the photos of a naked woman – some of her whole body, others close-ups, and they seemed staged, like pornographic pictures. He might have assumed they were a couple’s intimate photos if it hadn’t been for a couple that stood out – one showed a burn mark on the woman’s thigh and another was of a severed breast.

Police were called. The photos were due for collection the next day and two plain-clothes officers waited outside the Kodak store in Tsim Sha Tsui. It wasn’t until nighttime that Lam pulled up outside in his taxi. He told the police he was collecting the photos for a friend, but the officers accompanied him to his home, surprising his parents and younger brother, Lam Kok-keung, at the dinner table.

It didn’t take police long to find the incriminating evidence. They told him to unlock the old metal ammunition box under the bed. Inside were two Tupperware boxes sealed with masking tape. A detective opened one and found a severed breast.

Police officers, two homicide detectives and Lam’s family were crammed into the small flat when British forensic chemist Sheila Hamilton arrived a couple of hours later – the flat silent, everyone dumbstruck by the gruesome find. Hamilton opened another Tupperware box and discovered a vagina pickled in formaldehyde. The evidence was considered too horrific for a woman to work with and she was taken off the case.

It was these Tupperware “jars” that inspired Lam’s moniker, although the local media dubbed him “the rainy night killer” because he picked up his victims under the cover of darkness and rain.

The number of body parts and amount of pornographic material made it seem unlikely that it was the work of one person – police suspected they had found a family of sex killers. Lam, his father and brother were all arrested and kept in separate cells. The next morning, handcuffed and accompanied by two guards, Lam was taken to see his brother, who lashed out at him, kicking and screaming. It took several minutes to separate them.

Lam promised his brother he would tell the truth and then confessed to the murders, revealing to police all the grim details.

After strangling Chan, he had driven home. It was 5am, the time he usually finished his shift. The street was deserted so he carried Chan’s body across it and into the block of flats, past the sleeping nightwatchman. Inside the flat, he hid the body under the sofa then lay in bed waiting for his family to get up.

When he heard them leave for work, he covered the bedroom floor with plastic and placed the body on it. He used an electric saw to cut up the corpse and took photographs as he worked. When he’d finished, he wrapped the head, limbs and torso separately and put them in the boot of the taxi. That night, he dumped the body parts in the Shing Mun River, near Sha Tin. A week later he read news reports about body parts washing up on the banks of the river, but police could not identify the body.

His next murder was well planned. He bought specialist equipment including surgical instruments and formaldehyde. Again the victim was a bar worker and this time he had sex with the body before dismembering it – the first time he’d had intercourse. Later he would tell police he had no interest in the women sexually and was embarrassed about the necrophilia.

He didn’t feel remorse about these two killings or the third, also a bar worker, telling police that the women were “useless to society”. His fourth victim, Laung Wai-sum, was different. The 17-year-old student hailed his taxi after a sixth-form dinner, when she decided not to continue on with her classmates after the meal. They put her in a cab to make sure she got home safely.

It was 9.30pm, much earlier than his previous killings, and he kept the girl handcuffed in his cab for hours talking to her about family, religion and life. At 4am, when she fell asleep, he strangled her and took the body home. When he was setting up the lighting to film his grisly activities, a lamp fell on the dead girl’s thigh and burned the skin – leaving the mark that the Kodak technician had noticed in the photos that led to Lam’s arrest.

When Lam went on trial, only men were allowed to serve on the jury. On April 3, 1983, he was found guilty on four counts of murder and sentenced to death by hanging. As was the custom before the abolition of the death sentence in 1993, this was commuted to a life sentence.

His family was unable to sell their flat – who would buy a place that had been turned into an abattoir? – so had to continue living there. They hung an image of Chung Kwei, a vanquisher of ghosts and evil beings in Chinese mythology, above the front door.