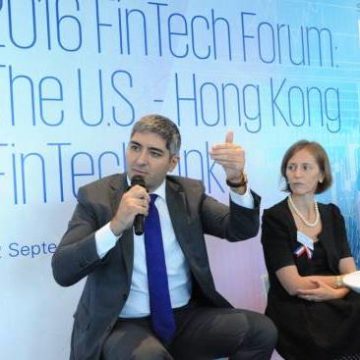 The application of technology in financial services has risen dramatically in a matter of a few years. Can Hong Kong become a leading “fintech” hub? Henri Arslanian of PwC explains why the city is well positioned to support such development

Fintech is generating a lot of excitement and for good reasons – not only is it the sexiest thing in finance, but Asia is where it’s really taking off and Hong Kong is increasingly becoming a key player.

Despite all the hype and excitement, it’s important to keep in mind that much falls under the umbrella “fintech.” It’s a broad term referring to newly emerging digital technologies – including artificial intelligence, blockchain, big data, crowding funding, digital payments, and robo advisory – that make financial services more efficient.

The roots of fintech

When fintech first began is a contentious question. Some say it started in the 1960s with the first ATM, others date it from the 1980s when Bloomberg came out with the first terminal or even in the 1990s with the first online stock brokerage websites. But most insist it became prominent after the global financial crisis in 2008.

“During the financial crisis, banks were busy dealing with the new fines, new regulations, and they were worried about survival. At the same time, some of the biggest game-changing technology and innovation that have transformed the way we live today came about,” says Henri Arslanian, PwC FinTech & RegTech Lead for China and Hong Kong.

These include Airbnb, Uber, and Whatsapp in 2010 and WeChat in 2011, he points out. As the gap between what banks could offer and what customers came to expect increased, tech start-ups flourished, he adds, calling it a rapidly developing story in which large technology firms have become the real game changers in the broader fintech world.

Optimistic about Hong Kong’s future in the fintech sphere, Arslanian says one of its core advantages is that the city is a global financial center. More than 70 of the world’s top 100 banks are in Hong Kong, making it ideal for a business-to-business (B2B) environment where many banks and financial institutions are clients for fintech products and services.

“It’s very difficult to build a fintech center if you don’t have a financial services ecosystem,” says Arslanian, who is also a TEDx speaker and an adjunct professor at the University of Hong Kong.

Hong Kong’s fintech community is young. In 2014, Arslanian began organizing fintech dinners – informal gatherings to discuss developments – and it was a challenge to find just a few people to fill a table. The landscape, however, has changed dramatically, especially with the participation of the government as investors moved in.

With an increasing number of tech start-ups in Hong Kong, InvestHK took on a full-time staffer last year, while both the Hong Kong Monetary Authority and the Securities and Futures Commission have already dedicated desks to the task. All the banks have staff specializing in fintech for which investment funds are growing.

The Fintech Association of Hong Kong has also been launched recently. “The goals are to advocate any issues regarding fintech, bring together the various parts of the ecosystem, and educate the next generation of talent to make them aware of the development in fintech,” says Arslanian, a board member.

China is streets ahead of the rest of the world in fintech development, particularly when it comes to the business-to-consumer (B2C) front where Tencent – which has more than 900 million monthly active users on its social media app WeChat – is a phenomenally successful mainland firm.

In addition to making a doctor’s appointment, booking a taxi, finding a date, managing money and buying insurance, “you can literally get many of your financial services needs met directly off the Tencent platform right now,” says Arslanian. “It really changes the dynamic of financial services.”

Chinese fintech firms, he points out, tend to stay in the mainland market largely because it’s easier to capture a significant share of the Chinese market than to try and venture outside. But for those Chinese firms looking to operate beyond the mainland, Hong Kong is sitting pretty and could serve as a stepping stone.

Likewise, Hong Kong is well positioned to support fintech firms from the West, and these are start-ups that may be mature but are hampered in their home market by large banks reluctant to move quickly with the new technology. Another key factor driving fintech in Hong Kong is the fact that much of the growth is being led from the ground up.

“This creates a great arbitrage opportunity for start-ups based in Europe or the U.S. to come to Hong Kong and use that as a stepping stone to service financial institutions across Asia,” says Arslanian. “Hong Kong is really [a market] by the community, for the community.”

The prospect of Hong Kong

Hong Kong is certainly strong on the “fin” aspect of “fintech,” but it’s weak on the “tech” side. The shortage of tech talent is one of the biggest hurdles to the industry. While efforts are being made to produce some strong talent, it is no less important to create the right mindset, Arslanian believes.

“The day it will change is when we look not to the real estate tycoons but to tech entrepreneurs as role models,” he says. “When we begin to value successful start-ups, then people’s mindset will change. And you need people to be comfortable with failures [throughout the journey].”

Silicon Valley, he stresses, has embraced the notion of “successfully failing,” and it’s only a matter of time – when Hong Kong has its own successful cases of entrepreneurs like Jack Ma and Pony Ma – that people here will also embrace the philosophy and become more adventurous in the tech sphere.

With a population of just eight million, Hong Kong will never flourish as a B2C market like China, but it has found its niche by focusing on B2B fintech. Singapore is after a similar market share, but the Lion City – which has been investing heavily in technology – is more of a complementary rather than a competing partner of Hong Kong, Arslanian notes.