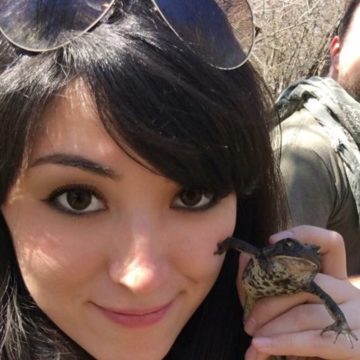 Emma Lock, who can be seen in horror film The Human Centipede II, walked SPCA rescue dogs, her eyes all swollen, as a teen, beat a fur allergy by surrounding herself with pets and spurned acting for a career with giant bats, snakes and owls

My grandparents are from Shanghai and, in the 1960s, they moved to London, where my grandad was head chef at famous fish restaurant Wheeler’s. My father was born in Neasden (in northwest London) and brought up speaking Cantonese (the lingua franca among Chinese in London). My mother is from Galiciain northern Spain, and moved to the UK when she was 12.

I was born in Golders Green, in London, and have a younger brother and an older sister. My Spanish grand­father has an incredible library of natural history books. From a very young age, even before I could talk, I was finding beetles and insects – grandad really nurtured that interest in me.

I was born with severe animal-fur allergies, though, and if I went anywhere near a horse or a dog, my eyes would swell up, I would have difficulty breathing and come out in hives. My parents tried to keep me away from mammals because they didn’t want my allergies to get worse, but I just wanted to roll around with the dogs.

My dad is a shipping insu­rance broker and in 1997, when I was seven, he accepted a job in Hong Kong. I went to Bradbury School (on Stubbs Road), arriving towards the end of the school year. Everyone had already made friends and I was quite alone and miserable for the first year.

The school had a gorgeous playground with a lush forest behind, and I would slip through the bars of the fence with a classmate and go looking for seeds, leaves and animals. I’d only ever seen dogs and cats and the occasional insect in the garden, but suddenly the butterflies were the size of my face, and amazing, brightly coloured caterpillars would fall from the trees and get caught in my hair.

My parents got me budgies because they thought it would stop me bringing animals home, but actually they unlocked Pandora’s box. I was bringing home turtles, frogs, mice and rats, and all things my mother couldn’t stand.

At school it was about being popular and fitting in, but I was a bit feral. I had a wonderful biology teacher at South Island School who realised I was very restless and wanted to be outside, so rather than confining me to my seat, he encouraged me to bring animals I’d found into the classroom. He was a fantastic influence on me.

There was a small pet shop on South Bay Road, near where we lived and, when I was 11, I went there every day after school. Eventually the manager asked me if I wanted to work there after school. She paid me in supplies to look after my budgies and turtles, and even trusted me to lock up.

In the same building there was a lovely Australian vet. I used to watch him go about his business and he started inviting me in and showed me how to use the clippers to take out stitches. Sadly, the building was slated for redevelopment and the pet shop and vet closed. It was then that I started working on Saturdays at the SPCA (Society for the Prevention of Cruelty to Animals), walking feral dogs.

Most of my time there I had swollen eyes because of my allergies, but they didn’t kick me out. I worked there for two years, until I was 14 and my father’s job took us back to London.

Returning was a massive culture shock. It really was a case of the third-culture kid, and people seemed so strange to me. I did my GCSEs at an all-girl’s school. My careers adviser was lousy. She told me my grades weren’t good enough to be a vet and I should be a pet-shop keeper, but I didn’t want to do that.

My acting grades were good so she suggested I study acting. When my dad’s job moved back to Hong Kong and he returned with my mum and brother, and my sister went to university, I stayed on in London and joined the Bridge Theatre Training Company, in Camden. On the side, I worked in a fish restaurant and as a labourer on building sites to get me through acting school.

At about that time I got my first snake – I decided on a reptile because it wouldn’t interfere with my allergies. I started bringing home more snakes, ones that had been abandoned, and then lizards and geckos and more exotic mammals.

The more I was around animals, the more my allergies disappeared and now I have no aller­gies to animals. They say that exposure to things you’re allergic to in small doses can actually improve allergies.

I acted in a horror movie called The Human Centipede II (2011). It was filmed in London and we went to Hollywood to promote it, but when I was there I realised I didn’t enjoy the life. There was an animal wrangler on the set called Michael. We really hit it off and had a romance that turned into a four-year affair.

He brought me on board at his work, taking animals such as birds of prey and meerkats into schools and giving talks. I’m still with the company and work with crocodilians, possums, tortoises, giant fruit bats and all kinds of snakes.

I take 12 or 13 species to schools and give presentations about things like habitats and nocturnal creatures. On weekends, we do birthday parties or weddings – people want their rings delivered by owl. And I’ve found a passion for working with people with disabilities, who seem to get a lot from their animal experiences. I’m able to bring animals home from my work for my Creature Feature videos on YouTube (also see emzotic.com).

My relationship with Michael ended and I met someone who is also really passionate about animals – Danny is a zoologist and lives in New Jersey. I helped him to open a side business doing animal education, and every time I go over (to the United States), I assist on shows and do guest-spotting. I think at some point I’ll move to the US, but not for a little while.

When I visit Danny, my colleagues look after my animals. Right now, in my house, I have 200 giant African land snails, two rescued guinea pigs, a hamster that was found on Hampstead Heath in a dog’s mouth, two snakes, three Madagascan Lesser hedgehog tenrecs, two centipedes and a couple of geckos.

I had a ferret called Bear, who was with me for years but sadly passed away last year. He was one of my animal ambassadors and I would bring him into schools. But mostly the animals at home are my pets; the ones at my work, the large owls and giant fruit bats and meerkats, are my colleagues.

My passion for animals is as much a part of me as my hands or my feet – I can’t suppress it. I can’t change the fact that I love animals and want to be around them. It’s like oxygen to me. I would love to be able to continue making a living and inspiring people to look for options for animal careers because that’s not something that is supported in schools.

If you’re smart, you’re told you can be a vet. If you’re not, you could be a zookeeper or a pet-shop keeper. But I’ve got friends who train Gambian pouched rats to smell out landmines and others who train ponies to help severely disabled children. I want to travel the world and interview people who have these incredible jobs, and put together a catalogue so that children can see all these different careers you can have with animals, whether you have allergies or not.