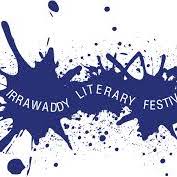 The festival was further soured by an impromptu speech by a local writer and human rights activist who accused the festival organiser of disorganisation, throwing the future of the event into doubt.

Duffy, who is creative director and professor of contemporary poetry at Manchester Metropolitan University, has remained tight-lipped about her reason for pulling out of the festival. A source close to the poet, however, told the Post that it was the university’s decision and was based on concerns about the political situation in Myanmar following what is widely being described as “ethnic cleansing” of the Rohingya minority in Rakhine state.

Coincidentally, the festival’s founder and director, Jane Heyn, and her husband Andrew, who is the British consul general to Hong Kong and Macau and also one of the ILF trustees, both went to Manchester Metropolitan University.

Canadian writer Madeleine Thien, nominated for the Man Booker Prize for her book Do Not Say We Have Nothing, was prevented from entering Myanmar because she didn’t have the correct visa – an oversight that friends close to the writer said could have been avoided if the festival had been better managed.

“I think the festival was pretty disorganised,” says bestselling Australian author Alice Pung, whose first novel, Unpolished Gem, won her the Australian Book Industry Award for newcomer of the year. “It wasn’t as well organised as more established festivals like those in Hong Kong or Ubud. I didn’t realise I was definitely going to the festival until a month before.”

Jennie Orchard, a former trustee of the ILF, says a lack of respect was shown to the around 40 Myanmese writers who took part. “The programme had no biographic notes and sessions featuring Myanmar writers had no information, just the name of the writer but nothing about what they would be talking about,” Orchard says.

Pung says the overall experience of the festival was good, but she felt as though there were two festivals running alongside each other: one discussing travel tourism (attended by mostly international people) and the other discussing the future of Myanmese politics and society (attended by Myanmese).

Pung, who attended the festival with her husband and two-year-old son, spoke at three events. She says she has befriended many Myanmese writers during her travels and has kept up long correspondences with them.

“It was a dream to meet them and see them in their home country. It was great to attend the Burmese events and hear what Burmese writers think about politics and society,” says Pung, who made use of Myanmese interpreters to translate the sessions. “I was disappointed there were very few Western readers going to hear them – they all went to the international events in English.”

A gala dinner for 200 guests last Saturday night began smoothly, but turned awkward when Myanmese writer Ma Thida stood up and made an impromptu speech, in both Myanmese and English, which criticised the festival for being disorganised.

The Heyns are an influential couple and some international writers and journalists were reluctant to go on record to comment on the festival or the gala dinner. A source said the mood in the dining hall quickly became tense after Ma Thida’s speech and Jane Heyn stood up and said words to the effect that the festival was over.

“She later tried to retract this statement and say it would continue, but the damage had been done,” the source said.

Delphine Schrank, a journalist and author of The Rebel of Rangoon: A Tale of Defiance and Deliverance in Burma, flew to Mandalay to moderate two sessions and then went on to the Rohingya camps to report on the trouble. She said Ma Thida’s speech came late in the evening, but as for the content of her speech she would only say: “[Ma Thida] wasn’t very clear what she was being critical about. Stuff is often lost in translation. I hesitate to say what I think she said.”

When asked about the festival overall, Schrank said she appreciated the opportunity to meet authors from around the country and enjoyed the event. As for the festival’s organisation, she commented: “It’s difficult to organise and put together, like herding cats, with people coming in from all over the world.”

Jane Heyn responded to questions about the future of the festival and her role in it by email.

“I am one of five trustees of the ILF charitable trust and I will continue in that role,” she wrote. “The ILF’s Myanmar board is arranging the festival’s registration in Myanmar and the two boards will work in tandem to continue to produce the festival.

“There will always be discordant voices around any event of this sort, but the Irrawaddy Literary Festival Charitable Trust is proud of staging a festival where the vast majority of the authors and participants are from the host country, entry to all events is free to all, and no salaries or fees are paid to anyone involved.”

One UK author, who wishes to remain anonymous, had planned to attend the festival but eventually didn’t. She said she disagrees with the suggestion that appearing for free “encourages a spirit of free-spirited thinking and respect for others” that is in contrast with a “more commercial ethos” that might result in sponsorship and consequently payment for authors.

“I am in favour of free thinking and respect for others,” the author said. “However, I am very glad that the historical expectation that authors would work for free, in particular at festivals, has been reversed after strong resistance from writers, who have ‘abject earnings’ in the current economic climate, [and] with Philip Pullman’s high-profile resignation from the Oxford Literary Festival triggering a sea change in festival practices.”

She believes that non-payment of authors at such events discourages diversity and therefore reduces free thinking and creative exchange, since only the wealthiest and most privileged can afford to do it.

Aung San Suu Kyi did not attend the festival, but a photocopied note written by her was placed on chairs for festivalgoers.

“The name ‘Irrawaddy’ evokes greatness, beauty and romance for all of us in this land which has been nourished by her waters throughout the ages,” she said in her note.

The festival overlapped with the opening of the Hong Kong International Literary Festival. Andrew Heyn didn’t attend the Hong Kong festival, his first since he took over the role of British consul general to Hong Kong and Macau late last year. This despite the fact that the consul general’s office usually hosts the opening party and that there were a string of big-name British authors in town for the event, including bestselling Scottish crime author Ian Rankin.

Simon Westcott, chief executive and owner of the Luxe city guides and a member of the board of the Hong Kong International Literary Festival, said it was disappointing that the Heyns pulled out of a literary lunch featuring author Jung Chang.

“It’s been wonderful to have the support of the US consul general and the Mexican consul general,” Westcott said at a drinks event to welcome international authors and poets. “I was surprised the British consul general wasn’t here, especially since we had such great British authors, including Britain’s first female poet laureate Carol Ann Duffy.”