Home / Travel / On the right track 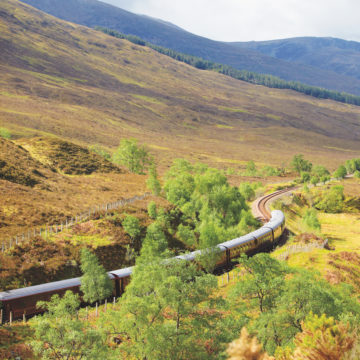 The romance of train travel maintains its timeless lure

Long-haul train travel is back in vogue and there are now more luxury operators than ever offering to pamper you as you trundle through remote landscapes. Away from the hurly-burly of airports, trains provide a chance to truly relax and enjoy the journey. Instead of focusing on the destination, attention shifts to savouring the moment.

Here are four fantastic train trips – each in a different country and offering a unique cultural experience, but all committed to luxurious accommodation and an adventure you are unlikely to forget.

Expansive landscapes, vast mountains, a latticework of lochs and pristine beaches – the remote west of Scotland is achingly beautiful. And there can be no better way to explore this corner of the world than on the Royal Scotsman, one of the nest luxury trains. Beautifully appointed and with no shortage of tartan touches, the train has been called a country house on wheels.

The four-day journey begins at Edinburgh’s Waverley Station with a handsome kilted bagpipe player leading the way to the burgundy train. With just 40 passengers in 22 cabins it is certain to be an intimate experience. Guests are greeted with a ute of champagne, the rst hint of the indulgences to come.

As guests settle into their cabins the train travels west, skirting Glasgow, and afternoon tea is served as it makes its way along the edge of Gare Loch. In the far distance is the magnificent 884m Ben Arthur. The observation car is tted with comfortable bucket chairs and sofas offering an ideal vantage point to drink in a view of Loch Lomond, Britain’s largest lake, and then the wild, boggy beauty Rannoch Moor.

Passengers are encouraged to dress formally for some meals and a number of the men wear kilts, many for the rst time. Dressing for dinner adds to the decadent atmosphere and once everyone is well fed and watered, a nightcap in the Observation Car with local musicians becomes a lively affair. When it’s time to retire, guests nd their wood-paneled cabin has been transformed into a bedroom, a thoughtful hot water bottle tucked under the covers. The train docks each night so good sleep is assured.

As enjoyable as it is to stay cocooned in the pampered luxury of the train, there are adventures to be had. One of the highlights of the trip is savouring the dramatic coastal stretch to Arisaig and then getting out to stretch your legs on Morar Sands, a white sandy beach with views across to the Isle of Skye. Back on board after a sumptuous lunch, a local highlander shares stories about Scottish heroes as the train travels on to Fort William for tea in the drawing room at Inverlochy Castle Hotel, or for the energetic, a two-hour walk through Nevis Gorge.

If the walk has tired you, the Royal Scotsman offers something no other luxury train does – an on-board spa carriage with a therapist offering massages as well as facials and manicures. It is hard to top a deep-tissue massage while listening to the gentle rumble of the train as it travels south to the Bridge of Orchy.

The last full day on the train is full of activities, beginning with a 35-minute ferry ride to the Isle of Bute to see the spectacular Victorian Gothic manor house, Mount Stuart. The fantasy of the third Marquees of Bute, it was built in the 1870s and houses an extensive art collection and library – just last year they discovered a 1623 rst edition of Shakespeare’s collected plays in the library.

After exploring the Gothic house, the train rolls on to Kilmarnock for a formal dinner followed by traditional Scottish music, a tting end to an exciting day. The train begins moving the following morning while many passengers are still asleep, rolling eastwards to Edinburgh. After a leisurely breakfast it’s sadly time to depart – and start planning the next Scottish adventure. The train travels all over Britain, up to Inverness in the north and as far south as London. www.belmond.com

Japan is known for its bullet trains which travel at speeds of up to 320 km an hour, so it may come as a surprise to learn that the boss of the company brought the Shinkansen bullet train to Kyushu who commissioned the country’s rst luxury sleeper train. Koji Karaike apparently wanted a train that would go slow, taking its time to showcase the beauty of the most southerly of Japan’s four main islands – a dream that was realised in October 2013.

Kyushu is a tropical island, a land of volcanoes and extremely photogenic. The portrait windows of a train carriage beautifully frame the lush rice paddies and verdant landscape. The train offers two routes around Kyushu – a long one (four days, three nights) and a short one (two days, one night) and both include plenty of outings. The longer route travels through the ve prefectures of Fukuoka, Oita, Miyazaki, Kagoshima and Kumamoto and includes a night in a traditional Japanese inn, a ryokan. It’s in a hot spring resort and the individual cottages have tatami mat oors, futons and private onsens.

The train is boutique – there are just 12 en-suite rooms and two luxury suites. The interiors draw on the classic, nostalgia of the belle époque Pullman carriages of Europe – think brass ttings and vintage lights – with exquisite Japanese touches. The walls are made of rosewood and maple and the oors from walnut. Shoji paper screens cover the windows and the sliding glass doors. As comfortable as the guest rooms are, it’s the carriage at the end of the train where you get the best view from a large picture window.

A good time to visit is in autumn when the maple leaves turn red in a spectacular display that is known as momiji. Incidentally, the name Seven Stars doesn’t refer to the level of service, but to the seven prefectures, or provinces, that make up Kyushu. www.cruisetrain-sevenstars.com

Surrounded by water, Australia is sometimes referred to as an ‘island continent’. The Indian Ocean laps against its west coast and the Paci c Ocean against the east coast. To get a sense of the vastness of the country, travel from Perth in the west to Sydney on the east coast, a 4,352km journey aboard the Great Southern Rail. The journey includes the longest stretch of straight line in the world, 478km across the Nullarbor Plain.

The three-night, four-day Indian Paci c route runs all year round, leaving Sydney on a Wednesday afternoon and arriving in Perth at Saturday lunchtime. In an effort to entice a younger crowd, the train has been spruced up in the last few years, and a new food and wine menu aims to showcase the best that Australia has to offer.

The journey drives home the vastness of the country and for much of the way there is little life outside the window beyond the odd sheep. It’s a chance for self-re ection as you watch the desert landscapes change to fertile plains. Along the way, look out for the Wedge-tailed eagle, the largest bird of prey in Australia with a wingspan of two metres.

The rst of several stops is Broken Hill on the rst morning, an area teeming with kangaroos and deadly snakes. The town was built in the heady days of the country’s coal mining boom and the Miners Memorial not far from the train station is a reminder of the people who lost their lives in the name of energy. For wine lovers, the excursion to a Barossa Valley vineyard will be a highlight. There’s also a stop at a pheasant farm and at Cook, a railway town that has a population of just four today. There are also on-board masterclasses in wine and local cuisine, so the chances of getting bored are quite slim. www.greatsouthernrail.com.au

Centuries ago merchants travelled to and from China on ancient trade routes through some of the world’s most challenging landscapes. They traded silk, spices and perfumes and these trade routes, stretching 6,400km, became known as the Silk Road. Adventurers such as Alexander the Great and Marco Polo also plied the Silk Road and now you can follow in their footsteps, but in a lot more comfort and style.

The Golden Eagle is Russia’s only fully en-suite private train. It is well known for the iconic Trans-Siberian route as well as the epic 21-day Silk Road journey through Central Asia. You can choose to go westwards, beginning in Beijing and ending in Moscow, or eastwards beginning in Moscow. Three weeks on a train is a long time, so you’ll be pleased to know the accommodation is luxurious albeit small. The Silver Class cabins are 60sqft and the Gold Class are 77sqft, both with private bathrooms, toilet and shower, and lower double bed and an upper single bed.

The eastwards journey begins in Beijing, taking in some of the key sights such as Tiananmen Square, the Forbidden City an the Great Wall. From there it is to Xian to see the terracotta warriors and then on to Dunhuang for a stop at an oasis in the Gobi Desert. Enjoy the dramatic mountain scenery as you cross the border into Kazakhstan and spend a day exploring the old city. The train travels slowly through Uzbekistan, stopping to see mosques and the magni cent Registan Square. There’s the chance to see the famous gas crater known as the ‘Door to Hell’ in Turkmenistan’s Karakum Desert and then onto the ancient city of Khiva in Uzbekistan and through Kazakhstan. The train reaches Moscow on the 19th day and it’s a chance to switch from sleeping in a carriage to the luxurious Ritz- Carlton to take in the city’s sights. www.goldeneagleluxurytrains.com