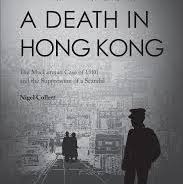 Nigel Collett’s book answers the big questions surrounding the scandal of John MacLennan’s death in 1980, fleshing out the cast of characters and sharing anecdotes and information not covered in previous texts

A Death in Hong Kong: The MacLennan Case of 1980 and the Suppression of a Scandal

Long-term Hongkongers are probably familiar with the case of John MacLennan, the gay Scottish policeman who took his life in 1980 after what many saw as a sustained witch hunt by the police.

The fallout from his death was far-reaching. In Hong Kong there were widespread calls for a public inquiry; in London, the Foreign Office was concerned about the unfavourable light it shed on senior government officials.

The suspicious circumstances of his death – he was shot five times in the chest – and the drama and scandal around the case meant that it was a huge story at the time. It later spawned a book, Open Verdict (2013) by Ken Bridgewater, and a play, Behind the Curtain, also from 2013.

Both Elsie Tu, a veteran Hong Kong politician, and Aileen Bridgewater, a local radio talk show host, mentioned the case in their autobiographies. It was also covered in John Conway’s book To Speak for the Dead (1994) and my book, Hong Kong Murders (2001).

Considering all that has already been written about the MacLennan case, is there really any more to say? As it turns out, there is.

Nigel Collett’s thoroughly researched and sensitive book is the last word on the MacLennan affair. Not only does he cover it in painstaking detail, following leads and explaining the many inconsistencies in the case, but he also puts MacLennan’s suicide in its social and historical context, and places it against a much bigger scandal that was brushed under the carpet.

“Behind the case lay something more sinister – the sexual exploitation of underage boys by prominent figures in Hong Kong’s establishment,” he writes. “Although MacLennan had no part in this, the discovery of this scandal led directly to his death. It was, as were similar contemporary examples of the sexual exploitation of juveniles in Britain, a scandal that was kept firmly under wraps.”

With great care, Collett describes the world that MacLennan came from – his parents were simple Christian farmers in a remote part of Scotland – and the Hong Kong that he discovered when he joined the police in 1973. This was a time when corruption was endemic in the force. Even though the Independent Commission Against Corruption was established in 1974, it took some years before it got a handle on the problem.

Collett paints a picture of a young man discovering his sexuality. MacLennan’s friend, Chris Burns, and his boss, Chief Inspector Jock Atkin, recall him taking prostitutes home, as well as having longer relationships with three women: a dancing girl, an army nurse and a Filipino maid. However, MacLennan’s homosexual side was coming to the surface and he found he was attracted to Chinese men.

Collett takes care to explain attitudes towards homosexuality at the time. With Hong Kong virtually Britain’s last colony, many of those who joined some form of imperial service to escape conformity at home ended up in the city. As a result, Collett writes, a significant proportion of the expat community in Hong Kong at the time was homosexual or bisexual.

While having homosexual sex was a criminal act in Hong Kong, the city was actually more open than in Britain, where it had been decriminalised. All that changed in 1978, however, when Richard Duffy, a prominent lawyer, was jailed for having sex with underage boys.

Behind bars, an angry Duffy spilled the beans, alleging that many prominent Hong Kong figures were gay and involved in illegal activities. What’s more, he revealed some of those men acquired very young boys through triad-linked procurers.

In one of the many asides that makes this book such a juicy, fascinating read, Collett writes that Duffy was well looked after in prison by his triad acquaintances and had so much sex that he contracted a venereal disease.

In 1979, the colony got a new attorney general. John Griffiths was a London silk (a member of the Queen’s Counsel) and before he arrived in Hong Kong to take up the position he was briefed about two concerns: homosexuality and the abuse of minors. He took up the role determined to address both, but unfortunately he didn’t seem to make much distinction between homosexuals and paedophiles.

It was in this context – of the Duffy allegations and a new attorney general – that the police put pressure on MacLennan, eventually leading to his suicide on January 15, 1980.

Collett succeeds in fleshing out the cast of characters in this tragic tale and shares anecdotes and information not covered in previous texts. Tu (née Elliott), Hong Kong’s best-known champion of the underdog, gets involved when the police attempt to dismiss MacLennan.

Despite the best of intentions, her focus on the case and the allegations that MacLennan makes unwittingly do more harm than good for MacLennan.

There’s also Chief Inspector Michael Quinn – the deputy head of the Special Investigations Unit that led the investigations into MacLennan – who is seen as a bully. Quinn describes MacLennan as being “brass-necked and arrogant for challenging his dismissal”.

The details of the last day and night of MacLennan’s life are painful to read and give a sense of the pressure that MacLennan must have been under. He meets friends and then a lawyer, drinks in the mess, and then drinks alone at home. He arranges for a 5.30am alarm call and arrives unexpectedly in the police station saying he is going on a raid and needs to sign out a gun.

Quinn and the other officers who break into his flat find him sprawled on the floor and assume it is a case of suicide, so they don’t check his hands for gunpowder residue. Then almost 30 people move in and around the body and interfere with the scene.

All this made it difficult later on to prove that MacLennan had pulled the trigger, and made his death look suspicious.

This is a fairly long book – 400 pages – and the pace does slow about halfway through as Collett details the witch hunt. For a comprehensive account, these details are essential – such as the male prostitutes who were dragged into the station and quizzed about MacLennan, with some coerced into making claims they had sex with him – but it does slow the action.

The public inquiry that followed MacLennan’s death lasted 134 days, called in 110 witnesses and cost an estimated HK$20 million. MacLennan was found to have taken his own life.

While Justice Yang, who wrote a report on the inquiry, was reluctant to go down hard on the police for their part in his death, Collett doesn’t hold back.

A phenomenal amount of research went into A Death in Hong Kong, answering the big questions surrounding the scandal and casting a light on those in senior government who escaped from it all unscathed. With this book, finally John MacLennan can be put to rest.