Home / Arts & Culture / We’ve got nudes for you 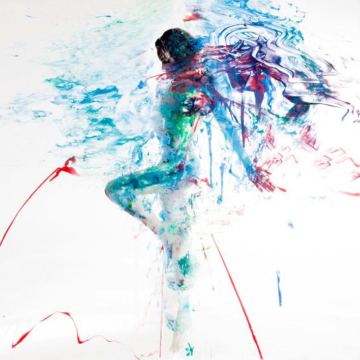 Their hard work and determination to “do art for art’s sake” is finally paying off. They have just won a coveted spot at the upcoming Affordable Art Fair, an international, contemporary art fair held in different cities around the world. At the Hong Kong edition this May, they will team up with two other artists for a collective exhibition.

Theirs has not been an easy ride and, well aware of the challenges faced by Hong Kong artists, they’re using their Pottinger Street, Central, studio space to support new artists.

The Gaunts are one of those fortunate couples that cannot only live and work together without bickering, but succeed in having a good time while they’re at it. They finish each other’s sentences – well, Becky finishes more of Nic’s, but that’s part of their dynamic.

“It’s a generator-reactor thing going on; one would be useless without the other. Sometimes you come up with things, you generate them, and if it weren’t for Becky, things wouldn’t happen because she reacts and makes them happen. We spark off each other,” says Nic.

Nic is the photographer and Becky is in charge of the logistics and people management, and also supports with the lighting.

“I book everyone, and kick butt. I usually manage to talk people into doing something they don’t want to do, and they’ve enjoyed it at the end,” says Becky.

The husband-and-wife team met at Britain’s West Surrey College of Art and Design 30 years ago – and hit it off immediately. Nic was taking photography and Becky was studying textiles.

Nic had been working as a photographer for newspapers since he was 16, and after university continued as a freelance photographer for the papers and in the music industry. They worked together on Arts Council UK projects, and after a monster two-and-a-half year project on the Rotunda in Birmingham, central England, Nic felt burned out.

The solution? A change of scene: they arrived in Hong Kong in 2011 with their three-year-old daughter, Cymbaline.

“Coming to Hong Kong from London was re-energising – you got the feeling that there’s scope and stuff to be done here and achieve, which is great,” says Nic.

But it wasn’t easy carving out a niche in a new city. Their lucky break came when they met Australian hair salon owner Paul Gerrard, who commissioned their first big shoot in Hong Kong.

“Paul really encouraged us to do fine art. Without him I don’t know if we would have done it,” says Becky.

So what is it that makes fine art photography different from standard photography? A big part of it is the creative vision.

“Why not do something a little out of the ordinary?” says Nic, who is represented by Vogelsang Art Gallery in Belgium.

The idea of doing something “out of the ordinary” translates to some really out-there images. Take the series “Obsession”, a collection of 21 images of male and female nudes. Each figure is painted in chalky white paint, making them appear like sculptures, and photographed striking a dramatic pose. In one image a woman is bound in red ribbon, and in another a man lies on his back, his hands and knees supporting a glass table top.

“Obsession is all about your inner wants and dreams. I put a message out on Facebook asking, ‘Who wants to be painted?’, and people offered to pose. The glass table top one was a friend of a friend – a banker who was only in town for a night,” says Becky.

Each of the images in the “Obsession” series is a limited edition of eight, and they sell for about HK$70,000 (US$8,900) each. Despite being Hong Kong-based, their biggest market is outside the city, with the images selling well in the US, in Miami and New York, and in Germany and Belgium.

“I don’t think galleries here are adventurous enough, but that’s starting to change; there is some movement,” says Nic.

That movement is likely to happen in part because of the increased number of big art fairs coming to the city, such as Art Basel Hong Kong, which began in 2013. Art lovers whose budgets don’t stretch to purchasing a gallery piece can still afford the HK$150 public entry ticket. All this serves to create an increasingly sophisticated Hong Kong audience. Nic has noticed an increasing respect for fine art photography.

“Photography is being seen more as an art form, whereas it wasn’t before. I think that attitude came from the Chinese mentality of making copies of things, whereas now you can say it’s a limited edition and you give them a certificate, signed and certified,” says Nic.

It’s not just the attitude of local art collectors that is changing; it’s also the artists themselves. When the Gaunts arrived seven years ago, Nic says, the culture of people doing art for art’s sake, regardless of whether it sold, was lacking.

“People would say, ‘Why should I pick up a camera if I’m not going to make a buck out of it?’ I think that’s changing. I know some photographers who are saying, ‘I’m going to shoot this just for the sake of it’,” says Nic.

Understanding the challenges of making a go of it in Hong Kong, they’ve been letting out their studio to emerging artists when it’s not in use. While most galleries take a 50 to 60 per cent cut of anything sold, the Gaunts ask for just 10 per cent to cover costs.

The approximately 700 square foot space underneath Era Barbers – a retro-style barbershop created by Gerrard at 36 Pottinger Street – is a partnership with Gerrard and is fitted out with gallery lights and rails.

“The art scene is still quite fresh here. You’ve got a lot of young or new artists on the scene who are willing to try stuff, but they need a platform. There’s not enough of that at the minute,” says Nic.

They also started a monthly creative art fair, Jewel in the Town, which hosts local artists and designers. “We started off with just a couple [of artists] and now we are having to turn people down. Last month we had three artists, a sculptor and four jewellery designers – it was a full house,” says Becky.

The artists each pay HK$500 to exhibit on the Friday night and Saturday, and the entry fee is used to cover the cost of a welcoming drink for visitors and set-up costs for the event.

It was at one of the Jewel in the Town events that Becky met sculptor Gail Deayton, who, along with painter Sue Perks,will be teaming up with the Gaunts for a booth at the upcoming Affordable Art Fair. Securing a space at the prestigious art fair – held in the Hong Kong Convention and Exhibition Centre – as independent artists is a big deal.

“Only two per cent of people who apply [to the Affordable Art Fair] can be independent, otherwise it’s all galleries,” says Becky.

Another series to look out for at the Affordable Art Fair is “Naked in Hong Kong”, a series of six daring images that, as the name suggests, feature a naked woman posing in the lanes around the Graham Street Market in Central.

The model in the series of 12 images was naked behind a sheet of Perspex and used her hands to smear paint over the glass, obscuring parts of her body.

“We had to keep washing down the Perspex, and the model had to keep getting in the shower. We always have to have a studio with a shower,” says Becky.

Nic laughs. “We always seem to have messy projects,” he says.