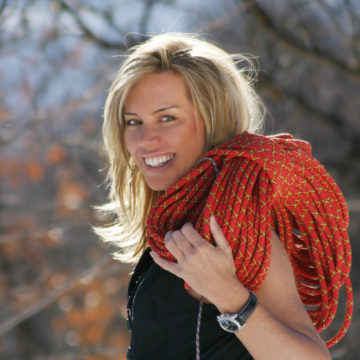 Ireland’s Brian O’Driscoll, South Africa’s Jean de Villiers and Hong Kong adventurer Annabelle Bond talk about setting yourself challenges and the sense of achievement to be had from training to reach, and achieving, them

It’s a balmy evening just ahead of the Hong Kong Sevens and a glamorous crowd is gathered around a pool at a town house on The Peak. Hong Kong socialite and adventurer Annabelle Bond is in her element – not because she’s playing the gracious host and inviting guests into the home she shares with her daughter, Isabella, and partner, Ken Hitchner, but because the evening is focused on something she cares deeply about – endurance challenges.

Bond began doing endurance sports in her mid-20s and says it gave her a huge boost in confidence and self-worth.

“I was a bit of sheep – a follower – and endurance sports really gave me my own sense of security in myself, belief in myself. I was very happy to take my own path. I’m comfortable in my own skin, and I think that’s the most important thing I got from doing endurance sports,” says Bond, 48.

Bond is an ambassador for Just Challenge – which creates endurance races for corporate groups – and the Laureus Sport for Good Foundation, which supports more than 100 community programmes in 35 countries that use the inspirational power of sport to promote unity and tackle social challenges. The two groups are teaming up to hold an endurance race in May next year, Challenge Africa 2019, which will see 100 people trek 100 kilometres through the African bush, camping in the wild and raising money to support vulnerable children in Africa.

Leading Challenge Africa will be Irish former professional rugby union player Brian O’Driscoll. He admits it will be his first formal endurance race, but says he’s got a good sense of what he’s in for.

“I’ve done some pretty horrendous preseason [training camps], which can be seen as a pretty hefty level of endurance. Preseason playing rugby or most sports is absolutely awful. I think back to some of the ones where you’d be doing three or four very tough running sessions a week. The level of intensity would be pretty savage,” says O’Driscoll, who captained and played for Leinster, Ireland and The British & Irish Lions during a 15-year career.

O’Driscoll says a big part of the appeal of endurance challenges is that they take people out of their comfort zone.

“Very few things that come easily to you are good for you. It’s the things you really have to work for and make sacrifices for, really embed yourself in, where you take most satisfaction. That’s where these sorts of challenges for people who ordinarily wouldn’t be used to pushing their boundaries [come in, giving them] an opportunity to do so,” says O’Driscoll.

Lucy Bennett-Baggs, who founded Just Challenge in 2017, says she has seen endurance events take off, particularly in the corporate world, in the five years she’s been in Hong Kong. So what’s the appeal?

“It gives people bragging rights; people want to talk about what they’ve done. Hong Kong in particular encourages an active lifestyle,” she says.

There’s an even more powerful force that has working professionals and weekend runners coming back for more once they’ve done their first endurance challenge – the opportunity to disconnect.

“We live in a world that is connected, you are constantly on, and then you go in the middle of the desert with people and have really meaningful conversations over camp sites and it gives you perspective,” says Bennett-Baggs, who did her first endurance challenge in the Gobi Desert.

She believes that the many hours of preparation, in addition to the duration of the race, can have a huge positive impact on mental health.

“Running and long-distance events give you hours and hours of time to think and focus and give you something to train for … And while you are doing the run by yourself, you also quite often bond with people you might not meet otherwise,” says Bennett-Baggs.

Bond agrees. When she’s working towards a sporting challenge she takes good care of herself, eats well and limits her alcohol.

“My whole life is a goal, that’s how I work. I like to choose something and have it as a focus. When it was the mountains, I set myself the goal of Everest and everything else worked towards it – the training, looking after my body,” says the adventurer, who in 2005 became the fastest woman and fourth fastest person to ever climb the Seven Summits – the highest peaks in North and South America, Asia, Africa, Europe, Antarctica and Oceania – a feat she achieved in 360 days.

And O’Driscoll says: “Anyone who gets involved in these challenges knows you won’t survive it if you don’t do some training. The feel good factor that comes with training and the gazebo effect of that on the endorphin release is good for every part of your being.”

Another rugby legend who was at the Strawberry Hill party to lend support to the endurance challenge is former South Africa player Jean de Villiers. He believes you don’t really know who you are – your core self – until you’ve pushed yourself to your absolute limit.

“The mental side is so important when you go through an endurance challenge – you really realise how far you can push yourself. And, just as in life, things will happen that you didn’t plan for and it’s your attitude in those circumstances that will determine if you are successful or not,” says de Villiers.

He should know; he played in four Rugby World Cups and suffered bad injuries in each of them.

“I had a lot of injuries and it’s about being able to get back from that and get to your best again,” says de Villiers, who plans to join Challenge Africa 2019.

“If you go on a five-star beach resort holiday, no one cares if you go waterskiing. People do care if you take off from an ice runway at the North Pole, but half the runway has fallen off,” says Bond.

“When you do something adventurous, you have all these things that go wrong and you get all these incredible experiences. People are more interested in that than if I’m wearing Louboutin shoes.”

They also offer an opportunity to meet people outside your social network – not just the people you are running alongside, but the people you meet along the way. It was during a challenge in Nepal that Bond says she really understood that it’s not money that makes people happy.

She did not see any mountain guides, known as Sherpas, with obsessive-compulsive disorder, attention deficit hyperactivity disorder or other mental imbalances. “If they have a worry, it’s, ‘how do I feed and educate my child’. No first world problems existed when I was doing that,” says Bond, who later paid to educate her Sherpa’s children.

Raising money for charity is a key element of almost all endurance challenges, and a fantastic way to give back to the people in the local environment where the race is taking place.

Race-goers also benefit from these challenges, which often bring out the best in themselves.

“I’ve been in endurance races where people who do not know each other at all see someone struggling in a race and they help them through. That for me shows the humanity. When you can help … it’s amazing to assist people and not expect anything in return. I think every individual should put him or herself through an endurance challenge at least once,” de Villiers says.