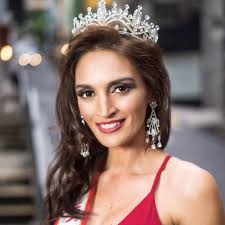 Country girl I was born on July 1, 1975, in a small diamond-mining town called Namaqualand, and raised in Cape Town, South Africa. Country life – sea, mountains and nature – has always been important to me. I was an only child raised by a single mum. My mum was in sales and watching her work hard made me want to help her. She instilled in me values of hard work, love and encourage­ment.

I was very studious because I realised she put her hard-earned money into my education. I studied at Cape Technikon and majored in marketing and communications. I went to work in a bank, but quickly realised I wasn’t cut out for that kind of nine to five. I needed to be out there, communicating and touching people. I went to night school and studied personal-fitness training and then felt drawn to prenatal, postnatal and baby yoga.

Stranger on a plane When I was 24, I entered the Miss South Africa pageant – I ended up getting into the final. I was at Cape Town airport, on my way to the competition, and had probably packed too many bags, when the man behind me in the queue at the check-in offered to help. I turned around and said, “No, thank you. I can do it.” I asked to be seated by myself, I wanted to read my book, Feel the Fear and Do It Anyway (self-help guru Susan Jeffers’ 1987 book).

The guy – who turned out to be a pilot, Richard – asked at the check-in if he could be seated next to me. He was told they couldn’t do that, but Richard managed to persuade them. When he sat down next to me I said, “I can see right through you, don’t even think about it.” It was a two-hour flight and we talked. It was real banter and people around us were listening to our conversation. Within 30 minutes he jokingly said, “Let’s go to the flight deck and ask the pilot to marry us.” I didn’t say yes or no. I described the place I wanted to get married, by the ocean, and said, “You find the place and then we’ll talk.”

A Hong Hong adventure On our first date, Richard said he wanted to meet my parents. It was surreal. He was living in Dubai at the time and we courted long distance. He moved to Johannesburg and worked for SA Express and we saw each other on weekends and got to know each other. We got engaged a year after we met and six months later we married.

A couple of months later Richard was offered a job in Hong Kong and we moved here with two suitcases, 20,000 rand in our bank account and full of love. That was the start of our adventure in Hong Kong. I began running wellness seminars, teaching infant massage, baby yoga and first aid, much of the time through the YWCA and Kids’ Gallery (a youth arts organisation). Our daughter, Savana, was born in 2003 and Hunter was born in 2007. We wanted names from Africa, made in China. We put them through local kindergarten to learn the language.

Queen bee We’ve lived on Lantau Island since we arrived in Hong Kong 17 years ago. We wanted to understand local traditions and the culture and get to know the local elders. It was through working with village elders and our neigh­bours, helping them clear the land, that we got into farming. We wanted to realise our love of country life in Hong Kong and make it more of what we felt we had grown up with – Richard grew up on a farm (in South Africa) and I love nature.

We sourced land, cultivated it, grew crops and got into bee farming. Richard and I both have day jobs and then we have farming passion projects. The idea of beekeeping has always been there and we now have a bee farm on South Lantau and we also do bee rescues, where we safely relocate unwanted bee colonies. We’ve been learning from Chinese beekeepers who have been doing it for 30 to 40 years and are at the end of their trade – their kids aren’t interested and want to pursue city life. The goal isn’t to make massive amounts of honey and money, but to invigorate the environment and enjoy the life­style of being outside and share that as a family and a community.

Home in every way Ten years ago, my husband suggested we get Hong Kong passports. I laughed, thinking it was a crazy idea, and he took that as a yes and did the paperwork. Since 2011, we’ve been Chinese citizens. I needed to have a certain level of proficiency in Cantonese to get the passport; I’m learning Cantonese – I can buy things in the market. We’ve integrated into the culture, it’s important to us to make Hong Kong home in every way. We’ve invested heart, soul and finances in Hong Kong.

At about the time that we got our Chinese passports, I was getting ready for a seminar and I heard these words in my head: “I can.” It resonated so strongly – I can do things. The message I love to share with kids (through I Can World, her social outreach initiative) is that they can do, be and have anything they want in life. I film kids who are doing really wonderful things and then I show those films in schools.

Photo opportunity In November last year, Savana, who is 14, did a runway walk for charity and was spotted by a talent scout. She joined an agency and the deal was that I would chaperone. She needed a Z card for modelling and a friend connected us with a photographer. It was a fun shoot and the friend suggested that I do a shoot as well. I did the next day.

It turned out the photographer was on her way to a photoshoot with Mrs World. I’d heard of the contest, but didn’t realise 30 countries [and territories] participate, including Hong Kong. It was an opportunity and within a week of knowing about it, I had applied.

Feel the fear but do it anyway The interviews were a grilling experience. I had an inkling of what it might mean from my experience in Miss South Africa. I learned that if you put your foot forward, if you show up, then life shows up for you. The portfolio isn’t just about a pretty face – it’s about what’s in the heart, how you can connect and inspire people and create something magical and dynamic. I was so excited when I learned in June that I’d been made Mrs Hong Kong.

The current Mrs World (Alice Lee Giannetta) is Mrs Hong Kong; she lives in New York and is a lawyer. Canada has a black Mrs Canada (Solange Tuyishime) and Wales had a Vietnamese Mrs Wales (Peng Jasmine Lin). I love the sense of inclusion; I feel I am a global citizen. I want to use the platform for I Can World, sharing the message about children with innovative ideas that can help save and sustain the planet. The Mrs World competition will be in November or December. I’m not nervous yet, but I will be closer to the time. I’ll be thinking “feel the fear but do it anyway”, the message of the book I was reading when I met my husband.