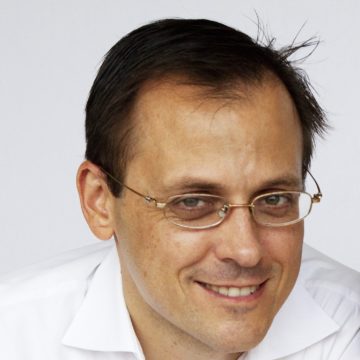 Fritz Demopoulos might be a huge science-fiction fan but only one novel from the genre made it onto his list, joining books about archaeology, Middle Eastern adventures, Chinese legend and the internet’s gold-rush years

Fritz Demopoulos is a Hong Kong-based entrepreneur and investor in the media and internet industries. He is a founding partner of Queen’s Road Capital, an early-stage venture fund focused on emerging markets.

This is a history of archaeology. Archaeology used to be the preserve of hobbyists and enthusiasts and there were a number of colourful personalities involved, such as Heinrich Schliemann, who discovered the city of Troy.

A high-school teacher introduced this book to me. He taught us world history – about the Middle East and Asia. It was the first time I’d been exposed to a larger world and the book had a big impact on me.

I reread the book a year ago and was back in the US when, by strange coincidence, I ran into the teacher. He was touched when I told him what a big impact the book had on me, and how it introduced me to a wider world where people followed their passions.

This is about the adventures of British intelligence officer T. E. Lawrence – “Lawrence of Arabia” – in the Middle East. It’s an autobiographical account of his experiences during the first world war, when he helped encourage the Arabs to rise up against the Ottoman Turks.

I read this when I had just graduated from college and was starting my first job. It was a fitting book to read at the time – starting any career is the beginning of an adventure. Winston Churchill said this was one of the best autobiographies and adventure stories ever written and I’d have to agree.

Romance of the Three Kingdoms

I read an abridged version of this book that was published by Stanford University when I moved to China after graduating in 1997. It’s one of the four classic Chinese works – the others are Water Margin, Journey to the West and Dream of the Red Chamber. I’d heard a lot about it and wanted to read a book that was reflective of Chinese culture.

Burn Rate: How I Survived the Gold Rush Years on the Internet

Michael Wolff is the man who wrote the recent book on Donald Trump, Fire and Fury. He’s known for embellishing the truth, which I guess is something you have to do as a great storyteller.

An early internet entrepreneur, Wolff describes trying to raise money, negotiate deals, deal with board members and all the rigmarole of starting an internet company. Ultimately his company failed and the book is a lighthearted and funny take on his experience.

I started my first company, Shawei.com, in 1999. When I read this book in 2000, so many of his experiences rang true.

Fred Hoyle was a cosmologist at Cambridge University and a proponent of the steady-state theory of the universe, which was in opposition to the big-bang theory. He coined the term “big bang” even though he was opposed to the concept. He was not only an amazing physicist, but also a science fiction writer, and The Black Cloud was his most interesting work.

This Black Cloud was the first time a science fiction writer had proposed a view of alien intelligence that wasn’t like our own. Until then, most aliens had two eyes and a mouth, but Hoyle’s alien was a super organism – a gaseous cloud the size of the US. I believe it’s one of the most interesting sci-fi books and am impressed that he came up with the concept more than 60 years ago.