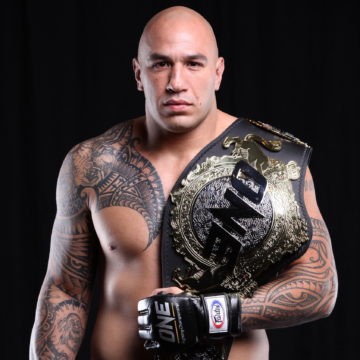 The One Heavyweight World Champion talks about everyday violence, growing up brown in the black-and-white US South, and trying his hand at acting

One in ten I grew up in Norfolk, Virginia. There were seven boys and three girls in our family – not all from the same mother and father. Even though our parents didn’t always get along, all the kids always got along.

My father is Filipino and my birth mother is Italian – she came back into our lives later on. I grew up in a different time, a racist time. Whenever I had to fill out a form for federal paperwork, I had a choice of two boxes to tick: “Asia-Pacific Islander” or “Other”. We were just south of the Mason-Dixon Line. “Other” describes how my life was growing up – I wasn’t the white kid, I wasn’t the black kid, I was something in-between. I learned to be polite at all times and understand that violence is part of everyday life. How to react to violence was something I learned as a brown person in a black-and-white world.

I was bullied a lot when I was a little kid. I learned how to take care of myself. One day, I decided I’d start hunting bullies and standing up for kids that got bullied. My friends were nerds, we weren’t in the cool crowd. I told them to tell me if anyone was picking on them.

Basic training I got a four-year athletic scholarship to go to Old Dominion University, in Norfolk, but I only did a year or so because I didn’t believe in the traditional college system, that you need a degree to be successful. I thought having some discipline in my life could be a good thing, so I joined the United States Air Force.

When I was in basic training, the wrestling coach told me I was pretty good and should try out for the team. I would go back and forth between my normal duties (refuelling air­craft) and wrestling. In my second year, I got invited to become the first athlete from the military to become a resident athlete at the Olympic Training Centre, in Colorado Springs. I lived and trained there full-time, I did meet and greets for the US Air Force, I talked about wrestling and competed around the world. It was perfect for me.

Elbowed out After nearly three years, I got injured in a wrestling match – the guy was trying to turn me and I was refusing to turn, and it tore my elbow apart. In the operation, they severed my nerve, so I had severe muscle atrophy in my right arm. I lost the use of my right arm and no one could tell me when, or if, my nerves would grow back.

I was medically discharged from the air force, lost my spot at the Olympic Centre, lost my spot on the air force wrestling team and lost my spot in the military. I was super mad. I did a lot of physiotherapy – and screaming and pain. The doctor told me that if I didn’t force myself to use my hand, I’d never use it again. Reaching for a tissue could be a 10-minute ordeal. It was 2½ years before I fully regained the use of my right arm.

Fighting chance I still wanted to compete. I saw mixed martial arts (MMA) on television and thought I’d give it a try. I went to the local gym and got choked out  by a guy who was 100 pounds lighter than me and I decided I was in love with the sport.

I started training in all aspects of martial arts, from boxing to jiu-jitsu. I watched videos and trained in the garage and at my friend’s house. This martial arts journey was a lonely one. I would drive 10 hours by myself to compete, then eat, sleep in the car for a couple of hours and drive back home so I could make practice. Even getting gas money was hard at the time.

One day I was close to quitting, it was too hard to do by myself, and Master Lloyd Irvin came up to me. He’s a Brazilian jiu-jitsu black belt, famous on the internet, and his teaching and instruction style have proven effective. He told me he’d been watching me and was proud of what I’d been doing by myself, and if I needed help, to come to him. Master Irvin is a guru. I took him up on his offer.

Dreams and aspirations In 2003, I had the opportunity to move to California to teach, train and pursue a martial arts career. California was a mecca for mixed martial arts. I fell in love with the weather, the training, the people, the food. I was training with the right people, I had the right coaches and was able to live the life I wanted to live. I met people from so many different fields – journalists, artists – and we talked about our dreams and aspirations.

In 2005, I got my first professional fight and later that year was invited to fight for an organi­sation called the UFC (Ultimate Fight­ing Champion­ship). I spent many years competing in both the heavy­weight and lightweight divisions. With some partners, I opened a gym, a training centre, called Alliance – it was 2008, right when the recession hit. We had to struggle and grind for a while, but the gym is still going and everyone is happy there. It was during this time that I met Kerry Kasik. She was a martial artist as well. We had a lot of good years together up until everything went sideways and we got divorced.

On top of the world Four years ago, I got a call from One Cham­pionship and now I’m the One Championship Heavyweight World Champion. It was super exciting and, even better, my first fight was in the Philippines. I won that fight and was ecstatic. It was so loud in there and so amazing. I decided I wanted to live in the Philippines.

I had a dream of opening an Alliance training centre. I also wanted to see if I would be any good at the entertainment side of the business, TV and acting. The management group Virtual Playground Philippines offered me a contract if I was willing to move to the Philippines and commit to a full-length feature.

I thought acting would be easy, but it’s very hard. You are doing 18-hour days sometimes. My first movie has just come out. It’s called BuyBust, was directed by Erik Matti and stars Anne Curtis, who is probably the biggest star in the Philippines. I played opposite her in an action role. The hardest part was learning the lines; the action part was easy.

We did a world premiere at the New York Asia Film Festival (in July). I’ll be filming my second film, Hawa, at the beginning of August in the Philippines. Hawatranslates as “contagious” and it’ll be an action movie.

The hurt business I was invited to speak at the Rise conference (of technology and entrepreneurship, in Hong Kong, in July) about getting to the top and staying at the top. I never thought I’d be speaking on a panel with a billionaire start-up guy and a real-life astro­naut.

What I told everyone was a cliché – you can hear it in Rocky – but it’s true: every­body gets knocked down in business and life. A lot of people in business and tech, if that happens they move on to the next idea. If you really love an idea or a business, get up and do it again. My business is the hurt business. I get hurt if I fall down. It’s physical, not just because the balance sheet is in the red not the black. I say, “Get up, get up, get up, get up.”