Home / People / American mum teaches her children to be Chinese 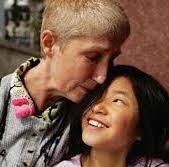 Patti Waldmeir, the Financial Times correspondent and author of ‘Chinese Lessons: An American mother teaches her children how to be Chinese in China’, explains why she decided to move with them to Shanghai

Working through school I was born in 1955 and grew up in Detroit, a very car-centric city of mainly Italian and Polish immigrants. I was the child least likely to spend my life travelling around the world. I’d never been away from home, not even for summer camp, before I went to college. My high school was on half days because there wasn’t enough room for all the kids.

When I was 14, I worked half days at a Dairy Queen (fast-food outlet) and by the time I was 15 my best friend and I were managing the Dairy Queen. At 17, I started working at a bank. I went to school from 7am to 12pm and then worked at the bank from noon to 8pm. I also worked my way through college, it’s what people did back then and I hope my kids will, too.

Poultry wages in Ghana I went to the University of Michigan and it was there that I was introduced to the out­side world through one of the teaching assistants, who ate Chinese food. I did a double major in maths and English with a minor in French.

I spent a year in France and visited other parts of Europe – I was the typical flower child backpacking around Europe clutching my copy of Europe on $10 a Day. It was 1975, the year Francisco Franco died. I won a British government scholar­ship and did a second degree in medieval English and Greek at Cambridge University.

Although I’d never done any journalism, after I graduated I applied to the BBC and Reuters. I didn’t get a job, but a foreign editor at the Financial Times (newspaper) helped me get a job as a university lecturer in Ghana. I arrived in 1980. We didn’t have running water or electricity and part of our salary was a live chicken that was presented at Christmas. I shut the chicken in my flat and asked one of my students to help me strangle it so we could eat it.

This writing life It was in Ghana that I got into journa­lism. I started stringing for a number of organisations including Reuters and the FT. I wrote the stories on a manual typewriter and then cycled to the telegraph office and waited until there was a line open and sent them by telex.

There was a coup in Ghana in 1981 – I found myself in the right place at the right time. The stories I wrote over that period got me a job at Reuters and for the next 18 months I worked in London and then Brussels. In 1984, I officially started working for the FT. They sent me to Lusaka, in Zambia, for a couple of years. From there I went back to London for a couple of years and worked on the Lex investment column. I don’t know why I got that position because I know nothing about money.

Tiananmen and Mandela In January 1989, I was sent to Japan to do maternity cover for a colleague and visited Beijing for a week. It was a few months before Tiananmen Square and the situation was quite tense. There were few foreigners about and people were nervous about speaking to a foreigner. That was my first experience of China and I didn’t automati­cally fall in love with it as I had done with Africa. Then I was posted to South Africa with the FT.

I arrived just before Nelson Mandela was released from prison and was there for seven years, through the high excitement of the end-of-apartheid times and until he became president. I wrote a book about making peace in South Africa, Anatomy of a Miracle: The End of Apartheid and the Birth of the New South Africa (1997). Then I went to the Washington DC to be the FT’s US editor, which I didn’t like at all. It was the period of Bill Clinton and I found US politics very boring compared with South Africa – nothing was at stake.

Adopting from China I knew I wanted to adopt and as I wasn’t married and would be raising them on my own I knew I couldn’t do a big job. The FT gave me a columnist job.

China was the obvious choice to adopt from because the babies were healthy and the Chinese system was seen as streamlined and predictable. I sent off the paperwork in 1999 and, nine months later, I was assigned a little girl and received a one-inch thumbnail photo of her with a little furrowed brow, looking worried. I ran to the copy shop and blew up the picture and copied it 15 times and put her photo all over the house. When I went to China to collect her, she was eight months old. She was quite spunky and started walking very early. Soon after, I went back to China and adopted another baby girl.

Being American  When we lived in America, I celebrated every Chinese holiday at our house – Mid-Autumn Festival, Chinese New Year, all of them. My kids attended Chinese school at the weekend from when they were two years old, but I don’t think they learned a single thing from Chinese school in all those years. Eventually, I decided it would be easier to move to China than to try and teach them Chinese in America.

The FT suggested moving to Shanghai, which was very nice of them and it was an unbelievable experience for the kids. We moved when they were seven and eight years old and stayed eight years. They went to a bilingual inter­national school. When we were in China they were certain they were Americans. When we returned to the US people would say to them, “Your English is very good”. And they would say, “Yes, so is yours, dude.”

Being Chinese When I wrote my South Africa book, I wrote it because I had to, my soul needed to, and it was the same with my second book, Chinese Lessons. I wanted the kids to have a record of the extraordinary experience we had in China and the fact their lives are pretty extra­ordinary.

Writing the book gave me permission to ask them things consistently when we were living in China that I otherwise might not have asked – how they were feeling about China, about their birth parents.

Lucy and Grace went back to China for a visit on their own last year and many people didn’t immediately know they were foreigners. Now we are back in the US, I think they like the idea that being Chinese sets them apart, so they are much more interest­ed in being Chinese than when we were in China. They are in a good position – they think it’s cool to be different, but they didn’t think that when they were in China.