Home / People / The life and times of a Mossad agent 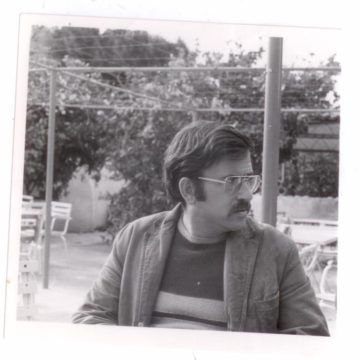 Overnight Zionist I was born in 1942 in Washington, DC. It is a very political city and if you’re inclined that way you’ll absorb a lot of the political thinking. When I was in high school, I was featured in a Sunday afternoon interview programme that was broad­cast nationwide, called Youth Wants to Know. It exposed me to senior political figures, such as JFK (John F. Kennedy) before he became president, and Russian visi­tors at the height of the cold war. It was an eye-opening experience for a teenager, which I credit with my later interest in strategic issues.

My father was a doctor and my mother an elementary school principal. I have an older brother. I’m the black sheep of the family – I surprised everyone by wanting to go to Israel, because I didn’t grow up in a strong Zionist atmosphere. After my bar mitzvah at age 13, I remember turning to my parents and saying, “I’m done. I don’t see any interest in being in a synagogue any more”. That’s what being Jewish was all about in the diaspora. It was only later, once I was in university, that I realised I could be Jewish as an identity. I remember telling my parents, “I’m going to Israel, I think I’m Israeli, I think that’s my Jewish identity.” An overnight Zionist.

To the promised land I was 20 when I first went to Israel. I spent a year on a kibbutz studying Hebrew, then I came home and finished my senior year at Columbia (University, in New York). In 1964, I went straight into the army (the Israel Defense Forces) because I understood that this was the way to become Israeli. That was a very unusual act for an American Jew at the time because you lost your American citizenship.

It was a few years later, when I show­ed up at the US embassy and asked for a visa, that they gave me my passport back. I was a citizen again because the (US) Supreme Court had ruled that going into the army of another country was not grounds for taking away citizen­ship. I’ve had two passports ever since.

In the army, I insist­ed I wanted to become an officer and go into intelligence. As a new immigrant that isn’t something that necessarily happens, so I had to campaign. It meant signing on for additional time, so I spent a total of four years in the army. I was in a unit that brought me into contact with the Mossad (Israel’s intelligence agency).

Kibbutz living I got married on the kibbutz when I was in the army. My wife is also American; I knew her from the States. Kibbutz life didn’t suit us, especially when we began to contemplate having children. This was in the late 1960s. You have a baby and you put it in a communal house from infancy. At night, walking past the houses for the little kids, I used to hear cries and think, “I wouldn’t like that if that was my kid; no one is there.” Also at that time, kibbutzes didn’t encourage children to go to university because they knew they would lose them.

One night, my wife and I were visited by the elders. They said, “We’ve decided that after the army you’re going to teach biology in the local high school.” I asked what qualified me to teach biology. They said, “Well, you’re a university graduate.” This was ridicu­lous; I had majored in oriental studies. It was another reason we decided to leave. I was still in the army when we moved to a suburb of Tel Aviv. After the army, I began working at the Mossad.

I spy I was in the Mossad for 13 years. In 1981, I moved to the Jaffee Centre for Strategic Studies, at Tel Aviv University. The centre was a by-product of the disaster of the Yom Kippur war (fought in October 1973, in which a coalition of Arab states launched a surprise attack on Israel) and the need for a civilian think tank to second-guess the establish­ment.

It was made up of former security people, like myself, and academics. I wasn’t supposed to say I had been in the Mossad – I had to say I was in the Prime Minister’s Office or that I worked in the security commu­nity. My breakthrough in terms of identifying myself as ex-Mossad came when I published a book, Periphery: Israel’s Search for Middle East Allies, in 2015, which had to go through layers of censorship.

That led me to being inter­viewed for Shelter (the 2017 Israeli espionage film for which Alpher was an adviser). I talk about various clandestine operations I was involved in – intelligence collection and analysis, recruitment and secret diplomacy. The Mossad has now adopted a more PR-friendly approach to letting veterans talk.

I left the Jaffee Centre in 1995 and spent the next five years as director of the American Jewish Committee’s Israel/Middle East Office in Jerusalem. I met Ghassan Khatib, a Palestinian (politician). When I left the committee, in 2000, Ghassan and I set up Bitterlemons, which was exploiting the internet for dialogue between Israelis and Palestinians. We had Iranians, settlers and Hamas involved – all in this dialogue that attracted hundreds of thousands of readers.

Bitter fruit Later, we expanded to Bitterlemons International, which was four articles about a broader Middle East issue. We brought in Americans, Chinese, British, if they had something to say. We realised that if we let everyone join in, it would be very hostile and negative, so there was no facility to comment. But there were hackers who didn’t like what we were doing and tried to bring down the website. We were on constant alert.

We had Saudis and Libyans who wanted to take part, which was terrific. For a while we had a Bitterlemons publication on the Arab Peace Initiative and we published books and collections of the articles. By 2011, revolutions were break­ing out all over the Arab world, the so-called Arab spring, and we were losing writers – not readers – who were afraid to write.

We were also losing the funders because they were saying we hadn’t made peace. That wasn’t what this was about, it was about civilised dialogue and discussion of difference, so the peacemakers could get some ideas – we never aspired to make peace. By 2012, we had closed down.

Impossible peace This was a chance for me to write Periphery, about Israel’s relationship with the countries on the peri­phery of the Middle East. I write a weekly Q&A column, Hard Questions, Tough Answers – for Americans for Peace Now (the US-based sister organisation of Israel’s Shalom Achshav). I don’t think peace is possible, frankly, particularly with the Palestinians, but (Americans for Peace Now) are very pluralistic and open and host this column on their website. I’ve published another book, No End of Conflict (2016), which is about the Israeli-Palestinian issue – it’s a very depressing book. I enjoy writing very much.