Home / Travel / Manspreading on a plane 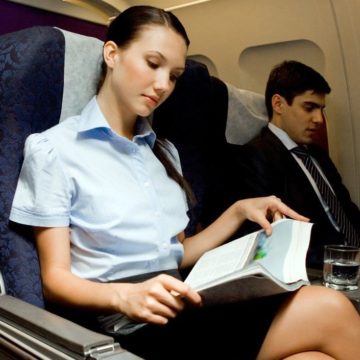 If you turn left when you get on a plane, stop reading now – you wouldn’t understand. For those who turn right, this is for you.

One of the most contentious strips of land outside the West Bank is the narrow space between two economy-class seats – the armrest. If the seat beside you is occupied, then the armrest is intended to be shared. It is, however, wide enough for only one elbow, which is where the problem arises – particularly if you are a woman.

Nine times out of 10 – based on my extensive experience flying “cattle class” – if a man is seated beside a woman he will claim the armrest. Not only that, but his elbow will protrude slightly into the woman’s seat space. Unless you are prepared to press your arm against the man’s – which will allow you to feel the rise and fall of his breath and is, I feel, too inti­mate a connection with a stranger – then you have lost two inches of your seat.

With the average seat width being 17.2 inches, this means you have effectively lost about 12 per cent. If you are unfortunate enough to be in the middle of a row and have a man on either side, you have lost nearly a quarter of your seat. And yet you are paying the same price as those space-invading men.

A male colleague claimed ignorance of this mid-air gender war – “Is it really a thing?” he asked – leading me to suspect that most men don’t even realise they are doing it. There’s an armrest, they claim it and think nothing more of the matter. It doesn’t occur to them that the woman doesn’t want to arm wrestle to reclaim her couple of inches of seat.

I dream of a future in which there are women-only seating sections on planes. Most women intuitively understand that the armrest is “neutral territory” and leave it as a slim buffer between them and their neighbour. I’d be prepared to campaign vocally for “pink rows”, but I suspect airlines wouldn’t be in favour because that would mean other rows full only of men – and that wouldn’t work. Men – and airlines – depend on encroachment onto women’s seats for comfortable travel.

I hope that in the wake of the #MeToo movement, people will come to realise that the airline armrest is a gender political issue. The first airline to establish “pink rows” will have my custom.