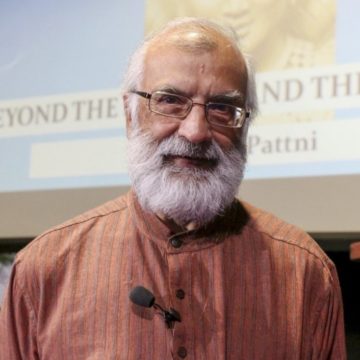 As a teenager growing up in Kenya, Dr Ramesh Pattni was interested in Hindu scriptures. He was particularly interested in the ancient text known as The Yoga Sutras of Patanjali, a collection of 196 Indian aphorisms on the theory and practice of yoga. It was the notion of gaining superpowers through yogic practice that really grabbed him.

“To my teenage mind this was fantastic – it talked of powers like being in two places at the same time,” he says, speaking by phone from India.

Pattni, who maintains a regular yoga practice, hasn’t developed any supernatural powers – not yet anyway – but says his psychological condition and well-being have developed tremendously thanks to yoga and meditation.

Today he is one of the most accomplished global scholars of yoga psychology. His research lies at the intersection of theology and the science of psychology. According to him, religion and contemporary psychology have a lot more in common than people may think.

Born and raised in Kenya, Pattni graduated from King’s College London in 1978 with a bachelor’s degree in biochemistry and physiology. If he’d had his way, he would have gone on to do research in neuroscience and was already enrolled in a PhD. But duty called. The family business was expanding, and he was wanted back in Kenya to help manage it. That became his life for 23 years, his academic dreams pushed aside.

“Throughout those years, I didn’t lose insight into spirituality or my passion for learning,” he says. “When I came back to the UK in 2001, I’d had enough of business and wanted to follow my passion, and came back to my interest in teaching and learning.”

After he completed a master’s in the psychology of religion at the University of London, his tutor suggested he apply to do an MSt (master of studies) in the study of religions at Oxford University. That led to a PhD at Oxford on yoga psychology based on the The Yoga Sutras of Patanjali which had so captured his teenage imagination.

So just what is so special about this ancient text?

Psychological techniques embedded in ancient spiritual texts can be secularised – it’s not necessary to believe in the religion to benefit from the technique, Pattni says. Take, for example, the technique of discernment (“viveka” in the Hindu tradition), which trains the mind to become focused and improves the process and quality of thought; and detachment, a refocusing technique that if practised on a daily basis encourages a sense of mental balance and wellness.

He points to several yogic techniques which are designed to improve meditation and also develop a sharp mind, making you more productive and efficient. These include breathing techniques that help develop a deeper, longer breathing pattern; withdrawal of the mind’s attention from the outside world; and developing the powers of concentration.

“The meditative technique is a contemplative technique. It’s about thinking along a certain pathway, staying focused for a long period of time. Contemplation is related to the spiritual pathway,” he says.

“It’s a fascinating book describing the practices to be done to achieve the goal of yoga and the supernatural powers that come of the power of yoga and the ultimate destination reached – a state of pure consciousness,” Pattni says.

According to the text, matter and spirit come together to create the universe, including humans. The tricky bit comes for us mortals when we forget that we are part spirit, and this can lead to suffering.

“If I say my body is me, then anything that happens to the body I believe is suffering to me. Basically, it’s mistaken identity. The yogic method creates a space in which to separate matter and spirit and know true spiritual consciousness,” he says.

Since Pattni finished his PhD four years ago, he has been researching the effect of meditation. He has been looking at it from a psychological perspective, focusing on the techniques that can be used to attain mental balance. This is not new – mindfulness meditation is already very popular – but Pattni’s research delves into which ancient spiritual techniques can support mental well-being in today’s world.

The ancient texts also teach resilience: how to accept certain things in your life without becoming passive and how to understand the boundaries around which your life is based. From a spiritual perspective, resilience comes from the ability to return to a state of separateness from whatever challenges are facing you.

“When you look at your life and the challenging situations in an objective manner, that process of inner contemplation helps to centre the self,” he says.

Some of these ideas might sound familiar to those with an understanding of contemporary psychological techniques, such as cognitive behavioural therapy (CBT) – a goal-oriented psychotherapy treatment to change the patterns of thinking or behaviour that are behind a person’s difficulties. The treatment was pioneered by psychiatrist Dr Aaron Beck in the 1960s, but Pattni says there was nothing new about it.

“What’s bothering you? What’s affecting you? All these CBT techniques of analysing conditions, insights into it and controlling your emotions and automatic negative thoughts – all these things were there 2,000 years ago,” he says.

Another overlap is with positive psychology, a contemporary therapy which examines what gives our lives meaning and purpose and considers how we can move beyond surviving to flourishing (a breakaway from traditional psychology that focused on mental illness and dysfunction). American psychologist Martin Seligman was one of its pioneers in the late 1990s and in 2002 he released a bestselling book, Authentic Happiness.

“Happiness is what spirituality is talking about all the time. Everyone is struggling with happiness and how to deal with sorrow. Happiness as a way of living in this world was talked about 3,000 years ago – positive psychology was only developed in the last 20 years,” Pattni says.

Pattni’s thesis looked at the connection between the concept of “flow”– a state of complete immersion in an activity, according to positive psychologist Mihaly Csikszentmihalyi – and the state of meditation. Not only do both states cause you to be so fully absorbed that you lose track of time, but they also lead to a sense of happiness.

“Happiness arises from that flow. When you meditate for half an hour you experience a deep sense of calm and feel happy,” he says.

For Pattni, science and religion aren’t in conflict. Rather, they have a lot in common. Both try to solve the problems of the human condition.

“The intersection between spirituality and psychology is coming to the forefront – how can these things help me redirect my perspective and thinking in different and creative ways?” he says.People in Hong Kong who want to learn more can attend Pattni’s lecture demonstration on yoga psychology on March 8. It will be his first time in Hong Kong, speaking at the Asia Society as part of its week-long India by the Bayfestival.

Yoga requires a mind that is still and focused. This trio of exercises suggested by Pattni will help prepare for a good meditation practice.

Sit in a comfortable position and become absolutely still, not moving aside from the rise and fall of your breath. Still your gaze, not moving your eyes. A still gaze leads to a still mind.