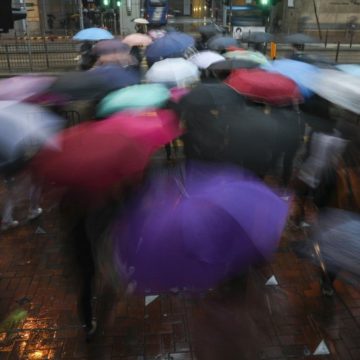 If you’re five foot eight or taller, the rainy season can be a dangerous time. I nearly lost an eye last week. The man toting the umbrella that crashed into my face didn’t even break stride. Surely that counts as a hit and run? Two inches to the left and he’d have had my eye out.

Forget “umbrella etiquette”, we need brolly licensing laws on the streets of Hong Kong. Until you’ve passed a test, you would be permitted to carry only a folding umbrella, effect­ively “L” plates. There’s only so much damage you can inflict with a flimsy fold-up.

Golf umbrellas would be reserved for “advanced pedestrians”. I’ve seen one of those mobile marquees take out a whole swathe of the Pedder Street cab queue. And while people are swatting up for their brolly licence, might I suggest a module on how to open the contraption. Or rather, how not to – as in not flicking it open as you come out of a shop and drenching people standing nearby.

In other cities, there is an unspoken rule that the taller of two people passing raises their umbrella above the other so as not to collide. Hong Kong seems to have missed the memo. My new strategy is to try to make eye contact with the controller of the approaching brolly and if they don’t look hostile, then to flash a smile. Nine times out of 10 this gets results, sometimes even a smile back. But there will always be one reckless soul who doesn’t make the necessary adjust­ment. They’ve usually got the sturdier umbrella. And having made eye contact, the collision feels personal.

Switching to a good old-fashioned raincoat isn’t the answer because you leave yourself vulnerable. That umbrella is as much a defence against brollies as it is against the rain.

And don’t get me started on the people who “upgrade” their umbrella on leaving a shop or restaurant, ditching their tatty model and picking up your new beast from the brolly bin. An accident, was it? No one believes you. That likely accounts for the intro­duction of a new breed of anti-theft umbrella stands in the city – the Foreign Correspondents’ Club, in Central, just got one.

Perhaps the answer is to carry a yellow umbrella. Those who didn’t support the pro-democracy movement wouldn’t dare carry such a politically loaded statement and, I like to think, those that did aren’t umbrella-thieving types.