Home / Arts & Culture / Behind the scenes photos of The Last Emperor 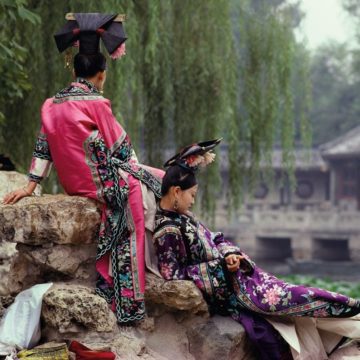 For two months over the summer of 1986, photographer Basil Pao watched sunrise at the Meridian Gate, the largest gate at the Forbidden City in Beijing. As part of the team working on The Last Emperor, the early starts were par for the course, but he didn’t mind the lack of sleep. Working for Italian director Bernardo Bertolucci was a dream come true.

As an 18-year-old art student in Los Angeles, Pao had sneaked into a cinema with a friend to watch Bertolucci’s 1970 expressionist masterpiece The Conformist – they were broke and didn’t have the money for tickets – and the experience changed his life.

“It was the first perfect film I’d ever seen and hugely influenced my whole way of looking at things,” says Pao from his home on Cheung Chau, an island 10km (6 miles) from Hong Kong Island.

The chance to work with the Italian director came 15 years later when his fiancée Pat showed a friend pictures of their engagement party. That friend was Joanna Merlin, Bertolucci’s casting director in New York. She arranged a meeting between Bertolucci and Pao, in part because he looked a little like Pu Yi, the last ruler of the Qing dynasty.

When they met at the Mandarin Hotel, Pao shared how he’d sneaked into the theatre and, without skipping a beat, Bertolucci said, “You owe me US$3.50.” They laughed and it was the start of a lasting friendship. Then 33 years old, Pao was cast as Pu Yi’s father, Prince Chun, which meant spending a lot of time either on horseback or on his knees kowtowing.

When he wasn’t wearing the heavy dragon robes, he served as one of a handful of assistant directors – “Bernardo’s eunuchs” – and helped with the film extras. Initially this involved tasks such as finding the horses for the Imperial Guards and, as the film went on, he ended up helping assemble some of the 19,000 extras that appeared in the crowd scenes.

Once they started shooting, producer Jeremy Thomas realised one stills photographer wouldn’t be enough and asked Pao to also do “special stills”. Many of those images are now on show at the Hong Kong Foreign Correspondents’ Club in an exhibition called “The Last Emperor Revisited”.

“Bernardo was yelling for me, ‘Where is he? What are we doing?’ It was very chaotic,” says Pao.

The behind-the-scenes photographs Pao took during the filming of The Last Emperor were eventually published all over the world and established him as a photographer.

“It was amazing working with these incredibly talented people, they were fantastic. I remember eating lot of spaghetti because the Italian crew couldn’t move without pasta,” says Pao.