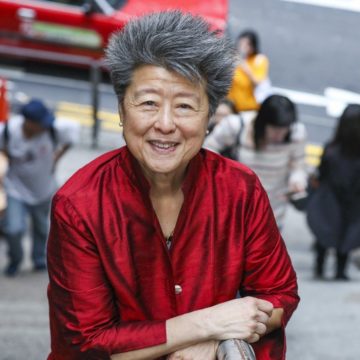 What do American writer Amy Tan, Tung Chee-hwa, Hong Kong’s first head of government under Chinese rule, and former Hong Kong chief secretaries for administration Henry Tang Ying-yen and Anson Chan Fang On-sang have in common? Their parents all fled China in 1948 and 1949 as the communists were about to take power.

Author and Fulbright scholar Helen Zia says that, at a time when migrant crises are rarely out of the news, these successful children of refugees make an important point.

“There’s a big lesson here for policymakers – you are actually doing yourself a favour by admitting people who are going to be so motivated to try to become contributing members of society and have their children do something that they were not able to do,” Zia told a packed breakfast briefing at the Foreign Correspondents’ Club in Hong Kong’s Central business district on March 28.Zia was in Hong Kong to talk about her latest book, Last Boat Out of Shanghai, which tells the tales of four real-life escapees from Shanghai in 1949.

Zia was born in the US state of New Jersey in 1952 to first-generation immigrants from Shanghai. As a child, whenever she asked her mother what life had been like in China, her mother would simply say: “That was wartime, a bad memory.” It wasn’t until Zia was in her fifties that her mother felt ready to talk about that painful period and shared a story that until then she’d told no one, not even her husband.

“For people who live through trauma, it’s not until the next generation when people feel strong enough, healed enough, to be able to tell these stories. It took my mother 70 years before she gave me a gift and told me this story – it’s what spurred me on,” said Zia.

Growing up, Zia came across many people who talked about coming to the US “on the last boat from Shanghai”. She heard the phrase – always uttered in the same tone – said so many times that she eventually realised there wasn’t a boat big enough to hold all these people.

“The sense of being ‘on the last boat’ had other variations – the last plane, the last train. It was hundreds of thousands, millions of people coming out of China in that period,” said Zia.

The great paradox is that, despite the fact that the exodus from China is such a common story, there’s very little written about it in English; Zia says her book, which took 12 years to complete, is the only collected research on the topic in English. And her decision to focus on Shanghai was met with derision in some quarters, with some saying that Shanghai people were prone to bragging about their lives.

Beginning with her mother’s story, she put feelers out and, through friends of friends and contacts, interviewed more than 100 people. She has included as many of their stories as possible, although the book chiefly follows four main “characters”:

Ho Chow, who came from landed gentry, scored high exam grades and became a graduate student in the US;

Benny Pan, whose father had been a collaborator working for the Japanese in Shanghai and maintained control over the infamous prison “76 Jessfield Road”, where torture was routine;

Bing Woo, who was almost left behind in Shanghai when her adopted sister Betty obtained tickets to sail to the US with her husband and young children; and

Annuo Liu, the daughter of a high-ranking official in the Nationalist government.

The book begins with the Battle of Shanghai in August 1937, which led to three months of full-blown warfare. During that time most of the city was under constant bombardment (aside from the Foreign Concessions and the famed Bund because Japan was not at war with Britain, the US or France at that time). A small enclave of about 10 square miles saw refugees pour in from all over the region, including the Chinese sections of Shanghai. Conditions were horrific.

“People were living in doorways, on streets. On a cold night it was guaranteed there would be quite a few who did not make it through the night. Children would walk through the streets trying to step around the bodies – some of their most vivid, painful memories. And it wasn’t just the dead, it was the living dead – people so poor, skeletal, they had nothing to eat and sat on street corners picking lice out of each other’s hair,” said Zia.

For many of those who shared their stories with Zia, it was the first time they had spoken of the horrors of their early life. She recalls one shocking account of an elderly labourer who didn’t bow quickly enough to a Japanese soldier and was swiftly bayoneted, his body tossed into Suzhou Creek.

Refugee crises were not headline news when Zia began her research, but they are now, and she cannot help but draw parallels between the experiences of those fleeing China in the late 1940s and what is happening around the world today.

“Think about your home, your family. What would it take for you to get up and flee with just what you carry and leave everything behind? Today there is a lot of focus on all these refugees coming to our shores – they are unwelcome, they will bring crime and destroy the fabric of our society. Little is thought about what it takes for someone to put their child on a rubber raft not knowing if it will sink in the Mediterranean Sea,” said Zia.