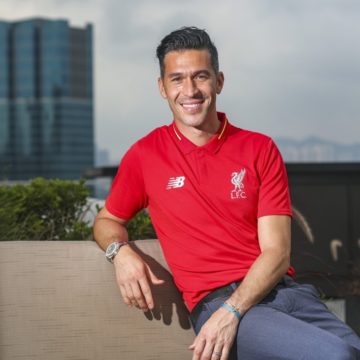 The former professional footballer, who will play for Liverpool FC Legends against Borussia Dortmund in Hong Kong on June 8, recalls his memorable days at the British club

Hands off I was born in Barcelona in 1978. My father was an indus­tri­al engineer and my mother had a clothing store. When I was six years old, my mother put me in a basketball team. After two days, the coach told my mum I’d be better suited to football because I kept kicking the ball.

My dad played on an amateur football team and I used to go with him to the club where he played. Life was all about foot­ball – not so much watching as playing – all the time. Many kids dream of becoming profess­ional football players and I wanted that, too, but that wasn’t why I was practising. I was playing because I loved it. I have so much passion for football.

Barca boy When I was 17, I was playing for a team near my home when Barcelona asked if I wanted to go for a trial. I played for almost four years in the academy of Barcelona – I lived at home and went training every day – and then I signed a professional contract. After that, I moved around for a few years, then went to play for Madrid, and then back to Barcelona.

I had known Spanish coach Rafael Benítez for several years before he was made the Liverpool manager, in 2004. We had a very good relationship and when he signed, he called and asked me to join. He said, “It’s a very good team. I think we can do something very important here.”

Bounce back I met Katherine when I was 17. She was a cheerleader for an NFL team in Barcelona. We got married when I was 25. Our first child was almost two months old when we moved to Britain in 2004. It was the start of my time playing for Liverpool and tough at first. It took some time to settle in and adjust to the weather and food.

The team, the club and the players helped me and my family a lot, but I like to think I’m a person who can adapt well to things – I’ve lived on four continents and in many countries. When things in football are going well, life gets pushed to the side because you are so focused. We played on Wednesdays and Saturdays, so there was no chance even to think about going on holiday. You play and train, you get into the role and think only about football.

In my first year with Liverpool, we won the (Uefa) Champions League, which is the biggest trophy in Europe. Liverpool was the highlight of my career. It’s a team with a massive history of winning, and was one of the best in the world in the 1970s and 80s. I was with Liverpool for three years and they were good years. We won four trophies and were in six finals.

Capital gains In 2007, I got a very bad injury – an ACL (anterior cruciate ligament) knee injury. It’s one of those injuries that means you have to stop for seven months. I moved to Barcelona for four months of my recovery and then decided to change atmosphere, moving to Madrid. Once I had recovered, I began playing for Atlético Madrid.

I then went to Greece (in 2010), to play for Panathinaikos for a year. After that, I spent three years in Mexico, playing first with Puebla and then with UNAM (Club de Fútbol Universidad Nacional). I enjoyed the football and the lifestyle there. The family also enjoyed it. I decided then to finish my career and went back to Madrid.

We’ve been living in the city for 12 years now, and we have four boys: Leo, nine; Marko, 12; Joel, 14; and Luka, 15. Two of them play football, one plays basketball. We live in a great place that’s 15 minutes outside the city centre. I enjoy the lifestyle and my family are happy, and Barcelona, where my mum and sister live, is only one hour away.

Back for kicks Most footballers retire at 33, 34, 35, and I was 35. It seemed like the right time. Soon I began commentating on TV in Qatar and the United States, but I missed football so much. When Atlético opened a franchise in India and asked me to go there for three months, I said yes. My family came for two or three weeks at the beginning and the end, and the time flew by. It was an amazing experience, living in Kolkata. After that, I thought, “No more football.”

Down under Soon I became an ambassador for Liverpool, however, travelling around and playing Legends games, such as the one I’ll play in Hong Kong in June. In January 2016, we played a Legends game in Australia, and the Central Coast Mariners called after­wards, asking if I’d like to play for three months, so I went back to playing football.

When you go back to playing professionally, it’s tough on your body – you are older and a little rusty – but I wanted to give it a go. Australia is an amazing country and I enjoyed it very much. After three months, they asked me to stay for a year, but that would be too long, and I returned to be an ambassador for Liverpool.

Touring, scoring It’s so nice to go around the world and meet the supporters, who are so passionate about the club, even though many only know it from social media and TV. Legends is a chance to meet players, and get an autograph or a photo – I left the club 12 years ago and I am always amazed how people still send messages and pictures.

When you are a player, you just rest-play-rest and you don’t realise the importance of what you are doing: Liverpool has 770 million followers around the world; 100 million people in China follow the club. Now that we have the chance to travel and share experiences, we do lots of meet-and-greets with supporters. Some of them are shaking when they take a photo with you.