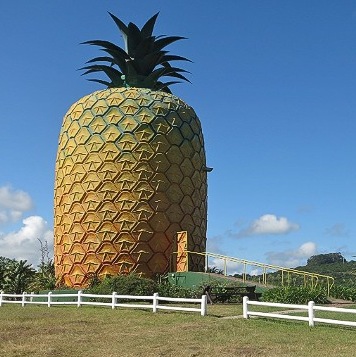 It’s a village not a town.

So say residents of Bathurst, a magnet for the creative and curious located in the Eastern Cape of South Africa, approximately 12 kilometers from Port Alfred.

Residents are proud of the eccentricity of their town. Or village.

“You’ve got to have certain things to be a town, like a bank and full-time doctor, and we don’t have any of that,” says one longtime resident who gives her name only as Mrs. Lens.

What Bathurst does have is a history dating to the early 1820s, a long and entertaining main street and a pub with delicious food that’s also a motel.

The best time to visit is Sunday morning, for the weekly farmers market.

But there are other attractions — starting with these.

It’s not as random as it seems.

The Big Pineapple represents the region’s pineapple industry — the settlers who arrived in the 1820s struggled to grow crops until the first pineapple was planted in 1865.

Inside today’s three-story fiberglass pineapple there’s a museum devoted to the fruit.

From the top there are great views of the surrounding pineapple fields and countryside. 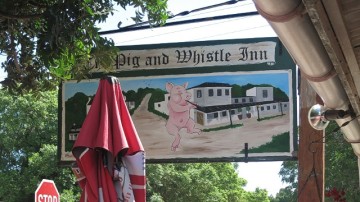 A pub is the focal point of Bathurst’s history.

Built in 1832 by British settler Thomas Hartley, it was known as Widow Hartley’s Inn after his death.

During World War II, a group of British RAF pilots decided it needed a cheerier moniker and renamed it the Pig and Whistle.

The “pig” refers to an old drinking peg, or unit of alcohol, and the “whistle” is a corruption of the word “wassail,” meaning to drink and be merry.

Although the pub has changed hands many times, the name stuck and it remains the oldest continually licensed pub in South Africa.

The food is excellent, with fresh produce from neighboring farms. 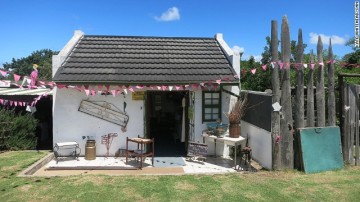 As a community of artists, academics and musicians, many residents say they were attracted by the village’s creative spirit.

Some came for a weekend and never left.

The Coathanger, a retro and vintage clothing store specializing in “shabby chic,” is one among a group of art galleries and craft shops with funky collections.

The store feels like a museum — old suitcases are stacked beside a 1970s toaster alongside piles of vinyl records and “Boys Own” annuals dating to the 1950s.

Out front, the small lawn is bordered by lavender bushes and features a white ceramic toilet topped with a pair of black stilettos.

“The toilet? I’m going to plant strawberries in it,” says owner Lindi Pieterse, as if it’s the most obvious thing in the world.

“It’s a sleepy little town, but it really comes to life on a Sunday — that’s when the hippies come out,” says resident Marcel Pullen who runs a pottery studio and shop with her husband.

“People live here because they want to get away from it all and there are some really interesting people here, like the couple down the road that run the Dancing Donkey.”

That would be paleontologist Rob Gess and his wife Serena, whose unusually named shop in a small thatched hut sells African arts and crafts made by local artisans, as well as Serena’s own line of natural organic products.

An advertisement for the Pig and Whistle boasts: “There’s no thirst like Bathurst.” Meanwhile, the pub door is inscribed with a bon mot of its own: “Bathurst is a drinking village with a farming problem.”

Inside, a wall is dedicated more wisecracks: “Marriage is a relationship in which one person is always right and the other is the husband.”

A leftover from early settlers, this is British wit at its silliest — the sort found on old school seaside postcards and one-liners that might’ve gotten a rise out of Benny Hill.

Souvenirs of these gags can be found at The Corner Art Gallery, which sells shirts that can be printed with the customer’s name alongside the line “Instant Idiot — just add alcohol.”

5. A museum of hoes and wagons

Bathurst Agricultural Museum has the answer.

Set up in 1970 to house old farming equipment, the museum now has more than 1,300 pieces on display, from ox wagons, old tractors and wagons to old dairy utensils and a steam engine.