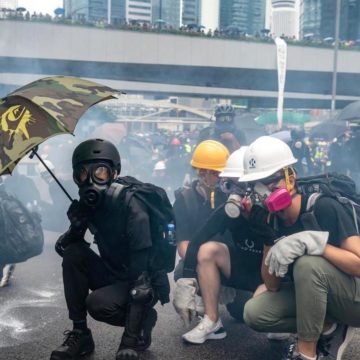 There was a much heavier police presence on the streets yesterday as prodemocracy protesters took to the streets in defiance of a banned mass march on the fifth anniversary of Beijing’s decision to limit the extent of Hong Kong’s democratic rights.

The protests, now in their 13th week, began mid-afternoon as thousands of black-clad demonstrators marched through the financial district chanting “Fight for freedom, stand with Hong Kong”. By late afternoon the protests had spilt over into clashes near the Legislative Council (LegCo) complex. Protesters threw bricks and petrol bombs and police responded with tear gas and water cannon firing blue dye.

At 11.20pm, as protesters were returning home, the MTR — the city’s underground system — announced the suspension of services on the Tsuen Wan and Kwun Tong lines on Kowloon, across the harbour from Hong Kong Island, due to police operations.

There were chaotic scenes at Prince Edward Station, on the Tsuen Wan line, as members of the Raptors entered a train carriage and used pepper spray and beat passengers with batons. Passengers who had not been in the protests were caught up in the violence.

A large crowd of angry residents gathered outside Mong Kok MTR station chanting “triads, triads, triads” at the police — a reference to the widespread accusations of officers colluding with local thugs.

The protests followed a wave of arrests on Friday of pro-democracy campaigners and lawmakers in a crackdown that fuelled anger at the authorities.

Among those arrested were the activists Joshua Wong and Agnes Chow, both from the political party Demosisto, the independence campaigner Andy Chan and three pro-democracy LegCo members: Cheng Chung-tai, Au Nok-hin and Jeremy Tam.

Wong and Chow, both student leaders during the 2014 “Umbrella movement”, were charged and granted bail of HK$10,000 (£1,000) each and ordered to stay in the city, obey a curfew and report to the police twice a week.

Wong said he would not be silenced by the charges and vowed to continue to fight for democracy and the protesters’ five key demands, which include a withdrawal of the extradition bill that had triggered the initial protests, an independent inquiry, dropping the term “riot” in describing protests, dropping charges against those arrested so far and allowing fully democratic elections.

“Political crisis must be solved by political reform. We all know the fundamental problem is that Hong Kong people can’t elect the leader of this city. If the government refuses to listen to the people, it will result in more protests,” Wong said. “When the life of Hong Kong people is threatened by the police, who abuse their power and use violence, it will result in the protests continuing until [Chinese] National Day on October 1.”

He said an even more important issue was the question of whether Hong Kong would deploy its emergency regulations ordinance to bring in Chinese troops.

“Compared with the clashes happening tonight, an emergency ordinance allowing troops to come to Hong Kong will be a bigger nightmare,” Wong said.

“If they send troops to Hong Kong it will affect the global economy.”

The arrests came as an appeal judge upheld a police ban on a march organised by Civil Human Rights Front, citing public order concerns. The front has organised three mass protests since the political storm erupted in June.

“Carrie Lam thought she could do what she did yesterday with all the arrests and it would scare people away, but it didn’t,” Mo said. “She was trying to create mayhem and she’s got it. I heard from some government sources that she wouldn’t use the emergency law that would harm Hong Kong.”