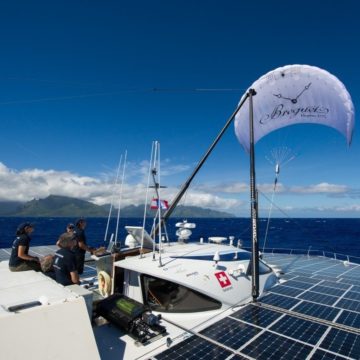 A futuristic looking vessel has been moored at Pier Nine in Hong Kong’s Central district over the last few weeks.With 512 square metres (5,511 square feet) of solar panels installed on the deck, Race For Water Odyssey looks more like a spaceship than a traditional seafaring boat. It has the kind of superpowers you’d expect of an alien craft, not least of all being totally self-sufficient thanks to its ability to harness both solar energy and hydrogen technologies. But its mission is very much about our world.

The one-of-a-kind catamaran and its on-board team of sailors, engineers and environmentalists are in Hong Kong to raise awareness about the complex and growing issue of plastic waste and pollution. They are armed not only with the latest data on plastic pollution, but with solutions, too.

“It’s important to speak about the plastic problems but it’s not enough – we’ve got to provide solutions,” says Marco Simeoni, the Swiss entrepreneur and keen sailor who created the Race For Water Foundation in 2010. “Just telling people it’s bad to use plastic is one part, but what we should do – and why we have the Act programme – is what we can do to act to change things.”

Camille Rollin is the programme manager for Act, which is designed to not only encourage people to reduce plastic waste and recycle more, but also to offer new waste management models.

“We have a boat, but we don’t clean the ocean. For us it’s too late. Once the plastic is at sea it’s degrading, it’s impossible to clean up. [The plastic] we see on the surface represents just 1 per cent. The rest is in the sea, the sediment, on the beach,” Rollin says.

This was the key finding of Race For Water Odyssey’s first mission in 2015, which visited 33 beaches on islands near five oceanic gyres – large systems of circulating ocean currents – and concluded that “plastic islands” don’t exist. Instead, there is a “soup” of microplastics swirling in the oceanic gyres. Simeoni and his team decided the solution instead was to be found on land.

“It is absolutely essential to prevent plastic waste from reaching the oceans,” he says. “The boat for us is very key because it’s fully sustainable – [it uses] the sun, wind and water as the source of energy. When we arrive in a city, everyone wants to see the boat. It’s an attraction, and we speak to them about plastic issues.”

The vessel’s Hong Kong stopover comes midway through its five-year around-the-world odyssey, which began in April 2017. About 1,500 people will visit the boat while it’s in Hong Kong, many of them schoolchildren.

“We are inviting a lot of schools because the young generation is so key,” Simeoni says. “We want to explain to them why we have to preserve the oceans, what’s happening with plastics and why we shouldn’t throw plastics in the sea.”

All the public slots to visit the boat have already been snapped up, but you can still admire it from a distance after it comes out of the Aberdeen shipyard, where it’s due for some maintenance. From November 23 until January 10 it will be moored at Deep Water Bay, on the south side of Hong Kong Island.

“Usually in large cities so much litter and human waste is washed into the harbour, but Hong Kong harbour is quite clean. It’s amazing when you consider the number of people living in Hong Kong,” he says.

Race For Water’s key event in Hong Kong was a workshop for 30 movers and shakers in Hong Kong’s plastic pollution and recycling scene. Among the guests were Doug Woodring, founder of Ocean Recovery Alliance; Tracey Read, founder of Plastic Free Seas; W.Y. Wong, senior environmental protection officer in the city’s Environmental Protection Department; and Philippe Grelon, who for years has been involved in environmental and waste management.

After an introduction to the boat and its mission by Rollin, Woodring gave a presentation lamenting Hong Kong’s poor recycling record.“Hong Kong should be the best place in the world for recycling because everything is vertical, but no one has figured out that they want to do that. They just want to keep the streets clean,” said Woodring, who believes that most of the trash in Hong Kong waters comes from the Pearl River Delta.

Then Wong bravely presented a pilot project the government is preparing to launch. The two-year initiative will involve the free collection of household plastic waste in three districts (Eastern, Kwun Tong and Sha Tin), recycling the plastic locally into pellets or directly into finished products.

The event was a rare opportunity for environmental NGOs to speak directly to one of the government’s environmental officers and they didn’t miss the chance, grilling him about Hong Kong’s recycling options.

The crew then introduced Race For Water’s key solution – Biogreen plastic waste to energy technology. It’s an innovative process that offers a local-based solution to the challenge of how to manage plastic waste. Simply put, it’s a way of converting plastics and waste into energy and useful products. The plastic waste is converted into an energy-rich synthesised gas (syngas) that can be used for the production of electricity, methane and hydrogen.

“For us the best option today is to transform plastic waste into energy because plastic is made of petrol, so it has a lot of kilocalories inside; it’s very energetic,” Simeoni said. “So, transforming the plastic waste into energy is today for us the most efficient way yet, but I hope that in the near future we will be able really to recycle and put the plastics in the circular economy.”

The equipment can be set up within a few weeks, and each machine can process between five and 12 tonnes of plastic waste per day and produce up to 2.5MWh/tonne.

The cost? About US$4 million per machine. And that is another reason Race For Water is spending so long in Hong Kong, hoping to set up meetings with people who might be interested in investing in this new technology. This could be useful for the management of our own plastic waste – a key issue since China banned the import of foreign plastic waste at the start of 2018 – and elsewhere.

“Peru, Indonesia, the Dominican Republic, they don’t have the financial capacity to buy this kind of technology. It’s why we have a profitable concept model that investors can invest in and know they’ll get a return on investment,” Simeoni said.

From Hong Kong, Race For Water Odyssey will head to Shanghai and then on to Tokyo for the 2020 Olympic Games.If you did not get the chance to board the boat, you can still find out more about what it’s all about at www.raceforwater.org.

And everyone can act on its message of key five “Rs”.

“‘Refuse’ the useless and ‘reduce’ the needless in order to limit waste generation; ‘Reuse’ and ‘repair’ what can be fixed to prolong product life; and ‘recycle’ when possible to give a second life to everyday products,” Rollin says.

The problem with plastic

50 per cent – of our oxygen is produced by the oceans.

50 per cent – of humanity is nourished by the oceans.

1.5 million animals die each year because of plastic waste in the ocean.

50kg of plastic waste is generated per person per year (5-10 per cent of which ends up in the oceans).