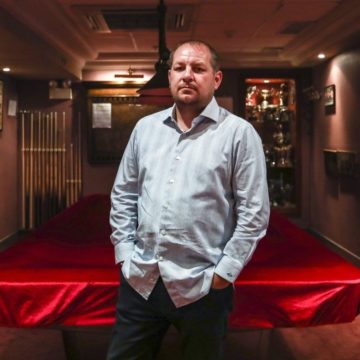 On track I was born in 1976 in northern Indiana, in the United States. My mom was a third-grade teacher and my dad worked 15-hour days and didn’t sleep much. I’m not one of those people who can do things the way they’re supposed to be done back home – go to school, get a job, wear a tie. I was always a little bit out of that box.

I had a talent; I was a distance runner. My uncle was a marathon runner. I’d go stay with him in the summer and he got me running. I went to North Central College (in Illinois) on an academic scholarship and studied international business. The school had a good running programme and I won a couple of national competitions. When I got out of school, I made a couple of US teams and I went to Australia and Japan a few times with them. When I was 24, I ran a 4.02 minute mile.

After college, in the late 1990s, I moved into a training camp run by a Belgian runner in New Mexico. High altitude, no snow and sunny every day – it was a mecca for distance running. You’d wake up, run 10 or 12 miles, then sit by the pool all day and play cards, and then you’d go out in the evening and run another 10 miles. It was super competitive. I was there a couple of years until it got to the point where, unfortunately, a lot of drugs like EPO (erythropoietin, a performance enhancer) came into the sport. I didn’t do drugs. I got out of running in the early 2000s.

Japan bar man My grandparents started asking why I didn’t get a job like my older brother. If I didn’t have a shirt and tie on it wasn’t work. They were from Poland and Croatia and had a strong work ethic, it was about putting the pennies under the bed. When I’d gone to Japan with the running team, I met an American who’d been living in Niigata for 10 years, he was married and fluent in Japanese. He owned a small bar we used to go to.

I called him up and said I was coming over. I opened three small bars with him and taught English. About 18 months into my time in Japan, my grandparents got seriously ill. My parents and brother were working, so I flew home to take care of my grandparents. It was the summer of 2003 and a bunch of boat casinos had opened near Chicago.

Do the maths I had a friend who was 10 years older than me. He was smart, he had a law degree and an accounting degree, but never used either. We were sitting around the pool one day and he said, “Blackjack is the only game in a casino that is actually mathematically beatable, why don’t we figure it out?” So, we bought 20 books, most were written by very mathematical people and were full of formulas and statistics. There was no one book that told you exactly how to do it.

We taught ourselves over a couple of months. My buddy got a few thousand dollars and quickly turned it into a quarter of a million dollars, bouncing around different casinos. Then we started playing together and we went to Vegas. When you go to Vegas, they are playing with six-deck games in a dealing shoe. So right off the bat I know all 312 cards. After a game is played, the discarded cards are put on the side. Theoretically I know what is left. I don’t know the order, but I know what’s left. As the game goes on, I know who has the advantage, me or the casino. When the maths is bad, you just don’t play.

Boom and bust For a year, my buddy and I were on a really good streak, playing eight to 10 hours a day. We only played when we knew we had a mathematical advantage. We never stayed in the casinos where we played. We would stay at Caesars (Palace) and play everywhere else. We would have a friend get a room and pay and we’d stay there, so our names weren’t on anything.

We started with a couple of grand and over the year ended up with about US$800,000. Had we been able to start with US$1 million it would have been astronomical. One day we got thrown out of the Bellagio (Hotel and Casino). We went down the street to The Mirage and played there for about an hour and suddenly someone came and said we had to go. We left and went to New York-New York, lasted about half an hour and got thrown out. We went to MGM Grand, got thrown out. Our names and photos had been put in a database that almost every casino in the world subscribes to; it’s run out of Las Vegas by a private detective, Griffin Investigations. It meant that as soon as we went somewhere, they got suspi­cious.

We played all over Vegas, Europe and in Asia, Macau and Singapore. Some of these places I got thrown out even before I played because they’ve got facial recognition. I got thrown out of the Wynn Macau. I don’t think it’s gambling when they can pick and choose who they let play.

Turning the tables After we got blacklisted, my buddy switched to poker. I thought maybe I could try working the other side because they have all the money and they can pay. I called a casino in Fort Lauderdale, Florida. I told them to look me up in the casino database. I said, “Your people are good people, but they don’t know the game. I’ll come down and train your staff.” The guy, Al, said, “When can you come?”

I was there three days. Al gave me money to go around and play, make sure everything was good from the dealer side, and then he had me teach the dealers and the surveillance people. He didn’t just pay me for the job, he also let me keep what I won playing with the casino’s money. I thought, “This is great, I get paid twice.” Al put me on to the people at the Hard Rock Casino and it sprawled from there. I would go to a casino and teach the key staff what to look out for. There was a lot of turnover in employees, so you would keep going back.

Corporate gambling I did the corporate side for about two years, but then went off it. I didn’t like what the casinos did to me and a lot of people. It’s not gambling when they say only losers can play and if you beat us, we’ll kick you out. I decided to go back to the player’s side. It was nowhere near as profitable – the vast majority of gamblers are small gamblers and you can’t fill up a room with 300 of those because (the material is technical). I made a DVD series and a book, Whack ’Em Blackjack.

I met my wife in Spain. I was there gambling and consulting and she was studying music for a summer. She is half Indian and as we got more serious, it became obvious that, culturally, gambling wasn’t what you do. My family wasn’t happy about me doing it either. So I went back to school and got a master’s of applied finance and started working in private banking.

I worked for years at Credit Suisse, running money for large families, equity, fixed income, derivatives, all that. It’s not a casino, but there’s a lot of similarity. No one knows what is going to happen in an equity market – a bomb could go off, a plane could crash, you don’t know. If you are good at running money, you look at where the risks are, where there’s opportunity. Now I manage money for a big Wall Street firm. I’m very good at risk management.

Training whales I started getting random calls from executives asking me to teach them blackjack. I’ll get flown to Australia to teach someone for three days, it pays very well. I teach the “whales”, the people who are serious and play serious money, some of these guys are throwing out US$20,000 on a bet, and that’s a bet every 15 seconds. When you add it up, you are talking millions of dollars.

I’ve taught a couple of prominent Hong Kong people, one has a very significant family office. It’s a discipline thing – I could teach my eight-year-old daughter to do it. There’s nothing really to think about – whatever the scenario the dealer or I have, I know the math and what to do. People get emotional when they deal with money. You see it in every bubble – real estate bubbles, the equity market. When you are playing this game, you can’t get emotional. What hurts people is when they aren’t able to do the discipline.

My family are happy that I’ve got a finance job and put on a shirt and tie, but this is much more fun. I wish I could do it every day but the pool of people that are capable of betting that way is small – I’ll get a random call from somebody in Hong Kong or Singapore.