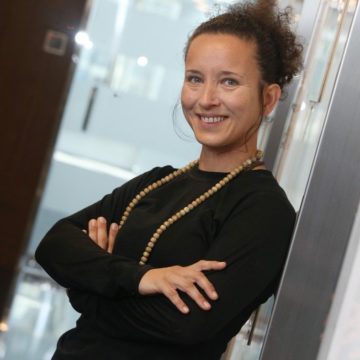 Have you ever found yourself shaking involuntarily like a leaf after a severe shock or fright, or in moments of extreme excitement and joy? Perhaps you’ve had “knocking knees” when you were too anxious, maybe before having to speak in public. If so, you have experienced neurogenic tremors, the body’s way of naturally releasing trauma or tension.

“Shaking it off” may look odd, even weak, but many people have found it to do good. That’s where TRE comes in.

Tension and trauma releasing exercises (TRE) are a series of seven exercises that help the body release deep muscular patterns of stress or tension. These simple exercises evoke a muscular shaking process in the body. When this shaking mechanism, known as a neurogenic tremor, is activated in a safe, controlled environment, the body is encouraged to return to a state of natural balance.

The exercises were developed by David Berceli, a trained social worker who spent many years working in high conflict areas. He spent much time in bomb shelters and noticed that everyone made the same involuntary response when bombs began falling – they put their hands over their head and curled into a fetal position.

“He said that if there is a universal contraction response to stress, there should be a universal relaxation,” says Anne Cousin, a certified TRE provider at Balance Health in Hong Kong’s Central business area who is originally from France.

“One day, when the bombs began to hit, the child he was holding in his arms began to shake. None of the adults were shaking, but all the children were. This, he concluded, must be the universal response.”

If it’s a natural response, why don’t we all shake?

In the animal kingdom, animals shake instinctively to release tension after a life-threatening event, but adult humans are able to override this voluntary mechanism. Berceli believes that adults keep from shaking for fear of looking weak or vulnerable.

The result is that we cut ourselves off from a natural and healthy mechanism that was designed to help relieve stress and calm our nervous system.

How do the TRE exercises make you shake?

The psoas muscles, the body’s deepest core muscles, are the primary connectors between your torso and your legs. They affect your posture and help stabilise your spine. They are where we often store physical, emotional and mental stress in our bodies. The exercises help evoke neurogenic tremors from these muscles to shake off the stress.

“We need tension to prepare for action. When that tension – the hormones, posture changes and changes in the breath – is not totally used, the energy stays in the system and we keep locked in the same patterns, so we don’t see our full resiliency any more. This reflex is a natural way to ‘reset’ ourselves,” Cousin says.

What are the benefits of TRE?

A young woman working in an office with chronic back pain came to see her. She had been doing yoga to try to reduce the pain, but it wasn’t working. After 10 one-on-one TRE sessions, the pain was gone.

“She said she had greater resilience at work and was better able to handle things. She was also able to tune into her body and notice when the tension came back and relax,” Cousin says.

She also worked with an older woman who had experienced chronic knee pain for a decade. The woman took six private sessions and practised TRE at home for the recommended 15 minutes two to three times a week, and reported that the knee pain was gone. “Know pain often comes from the pelvis, so as she released tension something clicked and her body realigned,” Cousin says.She has also seen good results in those with insomnia, which is often a signal that stress, anxiety and tension are preventing the “sleep mechanism” from properly activating. The deep muscular relaxation that TRE elicits allows the body to activate the “rest and digest” relaxation response of the parasympathetic nervous system that allows the body to sleep.

Is TRE for everyone?

Anyone who does the exercises will shake – though everyone’s shake is different. Although TRE can be learned and practised by people of all ages and fitness levels, it is not recommended for the very pregnant or for those who have had recent abdominal surgery.

“If someone is not shy, is quite composed, straight away they will want to start in a group. And sometimes in a group someone will find ‘My shake is quite strong and I cry and have questions, I’d like more personal attention,’ then they will book private,” says Cousin, adding that it is important, whether you do group or private classes, to always start with an instructor.TRE is intended to be a self-help system. After four to six sessions with an instructor, most people are then able to practise on their own at home. Those who have experienced extreme trauma, have post-traumatic stress disorder (PTSD) or have fragile mental health are advised to have one-on-one sessions.

“TRE works very well in communities,” Cousin says. “It has helped firefighters and tsunami survivors. To have a good shake, it is good to feel supported, which is why groups are good as well. In our modern society we are less resilient to catastrophes because we are isolated.”

Is TRE backed by scientific studies?

A case study published in July last year in Australia’s Journal of Military and Veterans’ Health describes the benefits derived from TRE in a soldier who had suffered PTSD following a car accident.

The soldier was put into an induced coma for six days after suffering fractures to his pelvis, ribs, face and skull, a dislocated collarbone and jaw, a collapsed lung, and crushed carotid artery. After facial reconstruction, he had six months of rehabilitation including physiotherapy and neuropsychology. Still, he suffered from anxiety, hypervigilance, intrusive thoughts, “an inability to sit still” and being in “constant survival mode”.

He took a two-day course in TRE basics and regularly did the exercises. Within four months, he reported physical and psychological benefits, including sleeping better, feeling more self-reliant and motivated, and increased flexibility in his hips, pelvis and lower back.

The researchers noted that TRE training is now provided to military and emergency services in the US, Brazil, Switzerland, Norway, Austria, Ukraine, Canada and Poland, and that it “appears well accepted by military and veteran populations as a preventative well-being practice”.

Where can you do TRE in Hong Kong?