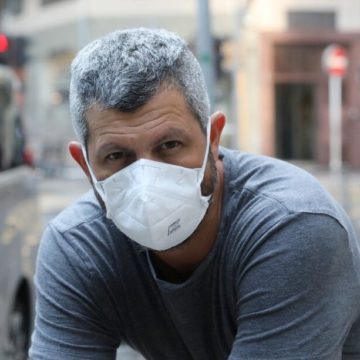 Gilly Strauss has been in the diamond business for more than 20 years. He was a founding member of luxury brand Hearts on Fire, which was acquired by Hong Kong-based Chow Tai Fook in 2014, and is now CEO of high-end jewellers Forms Jewellery. When we meet last week, he’s closing a tense deal.

“The guy is in Boston and he’s desperate. I’m trying to get the shipment to him by Friday, but Thursday is a public holiday here and in China,” Strauss says.Could anyone really be that desperate to get diamonds? No – Strauss is not talking about sparkly rocks, but face masks of the surgical and NK95 variety. Three months ago, Strauss knew next to nothing about face masks. Now, he can reel off personal protective equipment (PPE) specifications and costs like a pro. It turns out the face mask business is not as different from the diamond business as you might think.

“It’s quite like diamonds right now, because it is a real hustler’s market. I don’t mean hustle as in make money – I mean hustle like, ‘Wow it is complete chaos, no one knows what’s going on.’ If you can stay focused, do a couple of things well and communicate clearly with someone in need, you can match those two things up. That is really valuable right now.”

Strauss is talking about getting face masks from Chinese manufacturers to those who need them in the US and the rest of the world. In the case of the urgent Boston deal, the rush was to get masks to the US by the time the country’s dental practices were to reopen on May 1 after suspending all but emergency treatments because of the coronavirus pandemic.

“The dental community has been left out because everyone is focused on the hospitals and no one realised that dentists are actually at risk when they do drilling. No one has spoken to them, and now they are opening up and need all this stuff,” Strauss, a native of Boston in the US state of Massachusetts, says.

So how did a 47-year-old diamond dealer come to be trading face masks in the middle of the pandemic? Like a lot of businesses, his was hit hard by the coronavirus. Reduced flights and strict quarantine measures meant it was impossible to visit clients, and sales of precious gems demand a human touch.“It’s very difficult to sell a US$250,000 piece via Zoom,” he says.

Everything came to a halt three months ago. The company took all the obvious precautions – reducing cash flow and costs, speaking to its landlord and moving to a four-day week – and braced itself to weather the storm.

A month later, a friend at a tech firm in Boston reached out. He wanted to get his hands on 100,000 masks – 25,000 for his firm and the rest to donate to hospitals in Boston.

As Strauss was working out how to help his buddy, another good friend, Sebastian Fiedler, the managing director of a design sourcing and manufacturing business, got talking to him. Fiedler’s business, Fresh iD Products, had also ground to a halt and he was looking for a way to keep his 65 staff across four offices – in Hong Kong, Germany and Turkey – employed.

“He said to me, ‘My business is gone, all this PPE equipment is going through the roof, let’s figure out a way to do it,’” Strauss says.

So Strauss began doing what he’s good at – making calls. “I’m a hustler, I’m a sales guy at heart. If you pick 10 people in your Rolodex and you start asking people, I guarantee you, right now, that at least five of them are talking about masks. Everyone is.”Perhaps not everyone, but certainly a lot more than before Christmas – as the demand soared, factories across China switched to making PPE. “Everyone I know who has a supplier from China, that supplier is now seeing if they can sell masks,” Strauss says.

Strauss and Fiedler’s team began working their way through a long list of roughly 900 Chinese factories that claimed to be making certified face masks.

“It’s dialling for dollars, talking to the factories. We’ve got the people on staff who speak Chinese asking the right questions,” Strauss says.

The problem, they discovered, was that the vast majority could not back up their claims. When they drilled down to the nitty gritty of certification, most of the time the Chinese firm would end the call. Sometimes, the firm would claim to be certified and give a certification number, but after investigation it turned out to be false.

The list was gradually whittled down, and of those that appeared legitimate and had capacity, the team sent people to check out the facility, take photos and test samples.

“Even the [Food and Drug Administration] list that the US put out, as we made our way through that list, at least 50 per cent of them only jumped into the industry in the last few months. I don’t know how they made it onto an FDA list,” he says.

The list was narrowed down to just five or six factories that they are now working with. “It is detective work going all the way back to the source, which most people are not doing because there is such a high demand. Hospitals are not equipped to be calling these Chinese companies,” Strauss says.

Amid massive shortages of PPE for health care workers, and the push to get people back to work and economies moving again, a bubble economy has formed and prices of face masks have soared. Surgical masks that Chinese factories used to sell for three or four US cents a piece are now going for 30 to 40 cents – a 10-fold increase. K95 masks, which used to cost 30 cents, are now being sold for US$1.30. And that’s before shipping costs are factored in.

“The freight costs, which used to be a small amount, are now 20 to 25 per cent of the cost of the mask. And when it’s landed, you’ve still got to get it through customs and pay VAT,” Strauss says.

There is no supply issue. Factories can produce anywhere from 100,000 to a million masks a day, he says. The issue is getting the goods on a plane and delivered to people who need them. This is complicated by payment issues. Fears over when this bubble economy will crash mean Chinese firms are demanding 50 per cent payment when an order is placed and the rest before it is shipped.

“It forces all these organisations who need the goods to wire money to people they’ve never worked with before in the middle of the night and cross their fingers. And that is insane. No hospital or government is set up to do business that way,” Strauss says.

Some are taking advantage of the desperation, shipping fake or faulty goods or simply disappearing with full down payments. Strauss expects the “face mask craze” to last a couple more months before prices drop dramatically as supply meets demand.

Longer-term, he sees the birth of a new industry.

“Every restaurant and retailer is going to need a counter-top dispenser for hand sanitiser, branded with their logo and colours. I think there is a whole industry that is being created that has a really long tail. It’s going to be a real business that has legs,” he says.

Strauss doesn’t plan to enter this post-coronavirus industry – he’s looking forward to returning to his familiar world of diamonds and rare gems.

“I didn’t jump into [masks] to make money, I was helping a friend. I’m enjoying running around trying to connect people with the stuff that they need. I’ll be in it another month or two, and then back to doing what I was doing,” he says.