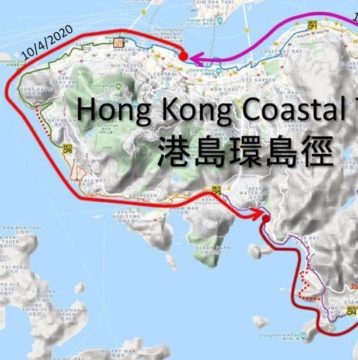 Paul Zimmerman had planned to spend his Easter holiday kicking back at the Blues Festival in Australia’s Byron Bay, but – like many people – his plans were squashed by the coronavirus. Grounded in Hong Kong, he decided it was the perfect time to take up a challenge that has long been on his bucket list – a 65-kilometre hike following Hong Kong Island’s coastline.

“Rather than being cooped up at home, I decided to try to do the Hong Kong coastal trail. It’s an idea that has been cooking for a while,” says Zimmerman, the CEO of Designing Hong Kong, a non-profit organisation devoted to promoting liveable density, a co-convenor of Save Our Country Parks, and a district councillor.

Starun Round The Island (SRTI) is an annual race around Hong Kong Island which has been held since 2016 and this year is scheduled for September. For the most part the race route hugs the coastline, but it turns inland in places where it is difficult for the trail to keep to the coast.

Zimmerman’s coastal route largely followed the Starun route, but where the latter went inland, he continued hugging the coast as much as possible.

His Easter mission was to locate and document stretches where the coastal trail was missing, with a view to filling in the gaps. Over three days, from April 10, he hiked the 65km around the island, beginning at the Observation Wheel on the Central Harbourfront and heading west.

He found six areas that need to be improved to enable a smooth circuit, including a 280-metre elevated walkway in the west linking the Telegraph Bay and Sandy Bay waterfronts (the project has been submitted to managers of the Cyberport business park). In the northeast, a public staircase from Shing Tai Road in Heng Fa Chuen to the Museum of Coastal Defence in Shau Kei Wan is under construction – the Hong Kong government is studying how to allow public access through the museum site; and improvements along the north coast from Shau Kei Wan to Kennedy Town are in progress (completion of a boardwalk under the Island Eastern Corridor expressway is critical for this).

Various government bodies, district councils and Country Parks officials have taken an interest in making the coastline more accessible, but the work has always been piecemeal, with officials looking at a particular section of the coast and not the big picture – the whole island.

“I don’t think anyone has ever thought about how it all fits together. By doing the walk over the weekend, I was hoping to stimulate debate, and I’ve already had a lot of positive response from my Facebook posts and people who have heard about it,” says Zimmerman.

Zimmerman’s ambitions for the coast have been bubbling away for some time. In 2002, his first project for Design Hong Kong kick-started a conversation about getting greater access to the harbourfront, and the government responded in 2004 by setting up the Harbourfront Commission. “The ambition at that time was to be able to walk along the harbourfront,” says Zimmerman.

These days you can walk five kilometres along the coast from the Hong Kong Convention Centre in Wan Chai to the Western District public cargo working area, also known as “Instagram Pier”, in Sai Wan.

Travel restrictions because of the coronavirus have clipped the wings of many. While Zimmerman expects that the complete coastal trail will be up and running in five to 10 years, Hongkongers hankering for an adventure can do much of the route now.

“You can get around the island now, but you’ve got to be prepared to either go inland for some parts or else to scramble if you’re sticking close to the coast,” he says.

At Sandy Bay, for example, because it’s not possible yet to walk past the soccer pitches of the HKU Stanley Ho Sports Centre on the coastal side, hikers will need to divert inland along Sha Wan Road Drive and Cyberport Road before rejoining the coast.

The two most challenging parts of the coastal route are the pig’s trail between South Bay and Chung Hom Kok Road on the south side of the island, and clambering down the rocks from Cape D’Aguilar Road to Shek O Main Beach at the southeastern tip of the island. The pig’s trail should only be attempted by those who have experience of bush walking and are prepared to get down on all fours and crawl through sections of the path.

“I cannot take responsibility if anyone does that right now because it’s a pig’s trail and there are some steep bits in it, but once it’s fixed up it’ll be perfectly fine,” says Zimmerman.

Only experienced hikers should attempt navigating the rocks from Cape D’Aguilar Road to Shek O. Although you do not need ropes, you need to be sure-footed and especially careful if it has been raining, as the water level is likely to be higher.

“It’s easier to hop across the rocks when the water level is low. There are strings up on both these trails, to guide people. I call them the uncle and auntie trails because it’s usually elderly gentlemen and ladies who mark these trails with string,” he says.

This is a coastline to be savoured, and Zimmerman recommends taking your time with it and appreciating each section of the trail, from the Shau Kei Wan shipyards to the fireboat in Quarry Bay to the typhoon shelter in Causeway Bay.

In Wah Fu, near Aberdeen, there is a shrine of 1,000 abandoned Buddhas, and the Tam Kung Temple in Shau Kei Wan is one of the oldest in Hong Kong. The waterfall at Waterfall Bay is certain to be a highlight, and the beaches always make for a pleasing change of pace.

“There is so much diversity of experience along the route, from industrial Chai Wan to the manicured promenades in Central to complete country parks that you walk through in Tai Tam Bay,” says Zimmerman.

Spread out over three or four days, the coastal challenge could easily be designed so that you end each day’s hike at an agreeable watering hole for a meal in Stanley or Chai Wan or Lei King Wan, known as “Soho East”. In Kennedy Town you could break for lunch at one of the many restaurants along the praya, and the North Point waterfront is festooned with places to eat.

Keen hiker Pete Spurrier, founder of Blacksmith Books and author of popular Hong Kong hiking books, including The Serious Hiker’s Guide to Hong Kong, has been hiking since he arrived in the city in 1993. When he first tried walking around the coast in 2002, he met constant obstacles, from sewage works to rubbish depots.

“People used to expect the harbour to be functional, to be able to jump on a boat. It’s time to change that now,” says Spurrier. “The harbour is no longer a working port; you do not need harbourfront for industrial purposes, so it should convert to public open space.”

Hong Kong’s district councils have in the past acted independently, working on improving access to the waterfront in their own jurisdictions without consulting others, and Spurrier says he is pleased to see that Zimmerman is helping to accelerate the coastal project.

Excited that the Hong Kong Coastal Trail is closer to completion, the author recently began research on a new addition to The Serious Hiker’s Guide series dedicated to the round-the-island route.

Zimmerman says: “The Coastal Trail has broad appeal. The absolute sports people will want to do the entire round, and for the general public it’s much easier to hike along the waterfront than up a mountain. There’s a fantasy about the trail, about walking around the island.”