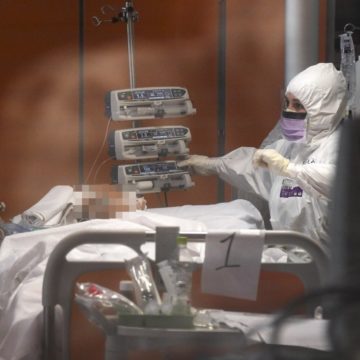 The coronavirus pandemic has left many of us reeling, struggling to adjust to a “new normal” of school closures, working from home and travel restrictions. Looking beyond the personal impact to the seismic implications for the world as a whole is daunting, but the relative quiet afforded by social distancing is good for contemplation. And the man to hold your hand through it is Italian physicist and novelist Paolo Giordano.

The 37-year-old writer’s name may be unfamiliar, but he’s big in his homeland, where he shot to fame with his debut novel, The Solitude of Prime Numbers (2008), which won Italy’s top literary prize, the Premio Strega. It sold a million copies and was translated into 30 languages – impressive for a man who didn’t set out to be a writer. Giordano studied physics at the University of Turin and holds a PhD in theoretical physics.

On February 26, his report “The maths behind the contagion” appeared in the Italian newspaper Corriere della Sera. The piece went viral with more than 3.5 million shares and has been credited with helping shift public opinion in the early weeks of the pandemic. Clearly there was a thirst for information about how to make sense of the virus.

Giordano started putting his thoughts on paper and, writing at his home in Rome from February 29 to March 4, penned How Contagion Works. It was published in Italy on March 26 and has already been translated into more than 20 languages, with the English version released on April 9.

Giordano may have got his book out at lightning speed – it’s the first book on Covid-19 to hit the market – but the coronavirus is faster. When he was writing on March 1, the number of confirmed cases in Italy was 1,164. As this review is published, that figure stands at 187,327. The value of his work is in encouraging us to take stock of what is happening. It offers a space to explore the many issues raised by the pandemic, from moral and ethical concerns to practical matters.

As Giordano reminds us several times in this short book, epidemics have happened before and will happen again. He urges readers to use this time to think about how we got ourselves into this situation and how we go forward. His greatest concern is that the fear surrounding this crisis will pass without any trace of change.

“Don’t allow all this suffering to be in vain,” writes Giordano, who will donate his royalties from the book to medical research charities and health workers. “[It’s] a chance to find the time to understand that we’re not only part of the human species, we are members of the most invasive species of a fragile, magnificent ecosystem.”

A self-confessed “nerd”, Giordano finds comfort in maths: as a teenager, he worked through calculations and numeric sequences to allay anxiety, a habit that continues to reassure him. So it makes sense that in this time of global uncertainty he turned again to the numbers, describing epidemics as “mathematical emergencies first and foremost”.

The author doesn’t just discuss the numbers, he debates whether having the numbers helps. Initially the figures were blamed for causing panic, so ways were found to make them appear less alarm­ing. But that caused greater panic because when the truth is hidden we assume the situation must be even more serious, so the numbers were again listed on homepages.

“This confusion is the sign of an unresolved relation­ship, a love triangle that seems to have come undone in our modern times: a relationship drama where citizens, institutions and experts seem unable to communicate,” Giordano writes.

If we are to understand the rapid spread of the coronavirus, we need to understand the number that Giordano calls “the hidden heart of each epidemic” – R0, pronounced “r-nought”. Simply put, this is the number of people each infected person will go on to infect. Any number higher than one will result in an epidemic. In the case of Covid-19, the figure is about 2.5.

Giordano uses layman’s terms so that when he writes “Lowering R0 is the math­ematical reason behind our self-sacrifice”, it makes sense. If we want to reduce the spread, we need to get that number below one and that’s only going to happen by following lockdown measures and self-isolating.The book has barely hit the shelves and already the numbers are out of date. Scientists are now suggesting the virus may be even more infectious than previously thought, with an RO of 5.7. That figure could well be revised again.

But this book isn’t about the numbers, it’s about drawing together the threads of conversations we’ve likely begun and not finished. It helps us to articulateour thoughts. It pushes us to make sense of what’s happening and, hopefully, plant some seeds for a brighter future.Giordano’s most chilling assertion is that we have only ourselves to blame for epidemics because of the aggressive way we’ve treated the environment. Viruses, he says, are the refugees of environmental destruction.“Who among us can truly know what last summer’s Amazon forest fires have set free? Who is able to predict what will be the aftermath of the almost mass extinction that recently took place in Australia?” he writes.

How quickly we’ve forgotten Australia’s devastating bush fires, just months ago, to focus on this new disaster. We move from one crisis to another, rarely stopping to join the dots. Giordano encourages us to make those connections – and it’s not a pretty picture.

Take climate change, which leads to freak downpours and dry seasons, which then lead to the overabundance of mature fruit on trees, which then lead to more contact between bats and gorillas, from which humans can contract Ebola. We are part of this system and need to consider the impact of our actions before they come back to bite us.

Giordano draws on his own personal life – contracting hand, foot and mouth disease as a child; a recent invitation to a dinner party in Rome – to work through important moral and ethical dilemmas. He shows how the epidemic should encourage us to think in terms of community.

“In times of contagion, therefore, what we do and don’t do is no longer about us. This is the one thing I wish us never to forget, even after this is over,” he writes.

Giordano repeatedly says what many of us have been thinking but takes it one step further. He points out how we are all suddenly craving a return to “normal”, as if normality were the most sacred thing. He explains that we need to live with “the time of anomaly” and the suspension of normality for however long it takes.

“It may be true that viruses have no intelligence, but they are better than us at this: they change, they adapt, and they do so quickly. We should learn from them,” he writes.

Giordano explains that he writes to stay anchored and to keep his fear in check. His book will have the same effect on many readers. Most conversations these days begin with a discussion of Covid-19. Many of us know the daily tally of deaths globally, we chart the spread of the virus and its implications. How Contagion Works should help you channel those thoughts to a more constructive end point rather than chasing your tail. It will give you something new to add to your next Covid-19 conversation.