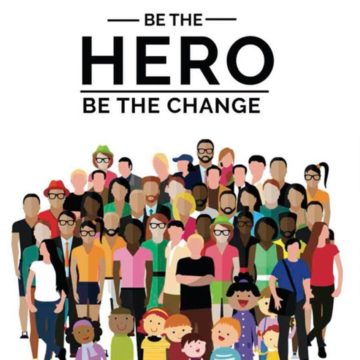 Sitting on a beach over the Christmas holiday, Matt Friedman excitedly discussed the upcoming launch of his latest book with his wife, Sylvia Yu. Little did they know that the coronavirus, about to quickly spread around the world, would railroad their plans.Bad timing? Not at all. The physical launch may have shifted to an online webinar, but the book itself could not be more relevant to the global pandemic.An international human trafficking expert and CEO of anti-slavery NGO The Mekong Club, Friedman’s career as a humanitarian professional was the drive behind writing the book, Be the Hero: Be the Change, which encourages ordinary people to step up and get involved in the issues of our time.

After more than 30 years in development work – in addition to fighting human trafficking, he has also worked in poverty alleviation and sanitation and water issues – Hong Kong-based Friedman came to realise that all the NGOs and support from governments doesn’t come close to addressing the actual issues.

“The only way to solve big issues – whether it’s climate change or bullying – is to get everyone to step up and help. I wrote the book to help the average person to address the issues of our time,” he says.

He finished the book at the beginning of this year and it went off to the printer – and then the coronavirus struck.

Responding quickly to events, he and his team of volunteers created a Covid-19 toolkit based on the book that consists of a two-and-a-half minute YouTube video and a 12-page pamphlet about how anyone can step up and help during the crisis.

“I’m frustrated that year after year it doesn’t feel as though we’re having breakthroughs – even if we had triple the number of NGOs we have. The only way the world can fix itself is if we accept as part of our collective responsibility that we have to do stuff,” he says.

Everyone who volunteers, no matter how big or small the gesture, should be considered heroic, says Friedman. The Covid-19 toolkit outlines the key findings and messages of the book – from the first tentative steps towards volunteering, to deciding where to focus your energy, to accepting responsibility to make a difference where you can, and ultimately just getting on and doing it.

Ordinary – often even spontaneous – acts are considered heroic here, from someone giving up their place in a long line for an elderly person to a student who sets up a social networking campaign to send messages about how to avoid catching the virus.

“It feels like there are things people can and should be doing. You don’t have to go into the front line – you can share information with others, identify money that can be raised to give to an organisation, or reach out to someone who might be lonely,” Friedman says.

The “Be The Hero” webinar on April 16 will be hosted by The Marketing Society. A video of the event will later be posted on the “Be The Hero Campaign” website, which is packed with information about the book, video blogs and suggestions for volunteering. A two-minute online survey allows people to register any positive act, no matter how small, with the goal of encouraging 100,000 people to do one positive cause-related gesture this year.

“People often have an inkling of wanting to do something, but it’s not enough to get them over the line. We have this way of talking ourselves out of things,” says Friedman, whose hope is that the campaign will be a first step for many people.

Friedman recognises that although many people want to help, personal circumstances may mean this is not possible. But if 10 to 20 per cent of the population is able to step up at any given time, the world would be a better place.

A sea change is already happening.

He points to Britain, where more than 500,000 members of the public signed up in just 24 hours in response to the government call for volunteers for its National Health Service “army” to help the 1.5 million vulnerable people who have to self-isolate for 12 weeks.

Hong Kong resident Alison Hodgson, a retired lawyer and long-standing volunteer, offered to support by helping edit the book and advise on the project. She says it is well timed, coming at a moment when communities need people to rally around and support others.

“The message of the book is that every little helps – and that’s especially important during this pandemic. It’s such a huge thing, no one person can deal with it,” says Hodgson, who is currently supporting a quarantined colleague on the project by doing her shopping.

“The campaign is reminding people of what they can and should be doing. There is a lot more you can do than donate money – you can check in on people. With the coronavirus the sense of community is returning,” Hodgson says.

Freelance designer Sharon Chiu, who runs a coworking space, has volunteered regularly for the last 10 years and offered to design the “Be The Hero” logo. Whereas most of her voluntary work has been about a particular issue, she liked that this campaign addressed the issue of volunteering itself.

“This campaign is not so much about the how and what, and more about the why – as in why volunteer. Rather than the action itself, it’s about the reasoning,” she says.

For Chiu, who moved to Hong Kong from Australia 18 months ago, it has been a way to feel at home and connected in the city. “Volunteering has given me a sense of community, a sense of belonging,” she says.

Hodgson, who volunteered on the Be The Hero campaign with her friend Helen Carruthers, says giving makes her feel good.

“There are benefits to your mental health of getting out and doing something. There are people who are lonely who join a group as a volunteer and get a new social life and friends,” Hodgson says.

Friedman also champions the mental health benefits of offering support. By standing up and taking action, people feel empowered and less helpless about a situation.

Carruthers says the campaign encourages people to think about what they offer. A former subeditor for Reader’s Digest, she drew on her experience to help edit the Be the Hero book.

“It’s about tapping into your different skill sets and abilities. We all have different areas of interest and move in different circles with our neighbours, families and communities. Rather than thinking ‘I have to go somewhere to do something’, I can think about starting where I am,” she says.

People tend to think of heroic acts in terms of superheroes rescuing people from burning buildings, but they can be small, everyday things.

Friedman says we need to lower the bar for what heroism is and recognise gestures of kindness as heroic and noble. He sees many people who feel the urge to do something positive, but end up not taking action and often living with a level of guilt. This campaign is for those people.

He often receives requests from corporations to give in-house talks on volunteerism and hopes that corporate social responsibility offices, schools and faith-based groups will come on board.

This isn’t a campaign about raising money, he says. It is about raising awareness – that collectively, communities can create positive change if many people act, however small their gesture.

“It’s not the scale, not about how big or small [the gesture],” Chiu says. “It’s the intention. Then we realise the potential to be part of something big and make change, and that touches on social and self-esteem issues.”

Friedman hopes that “Be The Hero”, a volunteer movement “birthed in Hong Kong”, will spread to Asia and the rest of the world.

“As a humanitarian person working in this field for years, and recognising that we’re not having much impact, this is saying, ‘We can’t do this without you guys’,” he says. “This is what the next generation of philanthropic work will look like.”