Home / News / Coronavirus in the Congo 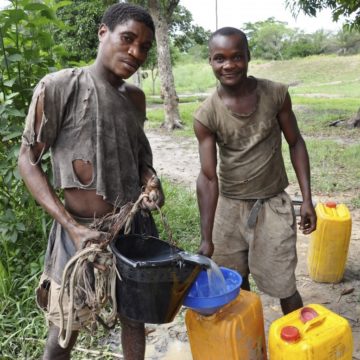 As the coronavirus spreads around the world, sending billions of people into lockdown, communities have reacted by panic buying, stripping supermarket shelves of essential goods.

That has not happened in the Republic of the Congo. When people in the central African country were ordered to enter a 30-day lockdown this week, most did not have the cash to stockpile goods.

It’s just one of the shocking and heartbreaking realities people fighting the Covid-19 disease in poor countries face when compared to those in the developed world.

In the West, social media is flooded with memes and reminders about the now well-practised mantra of frequent handwashing with soap, self-isolation and wearing a mask if you are ill, but for those in the Republic of the Congo these basic preventive measures are difficult, often impossible, to follow.

“Most people here don’t have access to running water. When you have a family of eight or nine living in a two-bedroom place, self-isolation isn’t possible. And masks? They aren’t available, full stop,” says Dr Joyce Samoutou-Wong, a missionary doctor and co-founder of the New Sight Eye Care charity in Ouésso, in the north of the country.

The devout Christian was born and raised in Hong Kong, and attended Diocesan Girls’ School before winning a scholarship to study in Britain. While studying medicine at the University of Edinburgh, she went to Africa in 2000 for a two-month work-experience stint in her fifth year.

There she met another doctor, Henri Samoutou, who she married in 2004. The couple were involved in an eye project in Gabon, another country in central Africa, from 2006 to 2008. They had three children in Britain and returned to Africa in 2012, first to the city of Impfondo in the Congo to open an eye clinic. Last year they moved to Ouésso to set up a second one.

The couple chose to work in the Congo because it is desperately short of medical support. Poverty is widespread and unchecked, and 77 per cent of the population lives on less than US$1.90 a day. These living conditions make it a tinderbox for the spread of Covid-19. Self-isolation and quarantine measures are almost impossible when homes are crowded, and people share beds, towels and cooking utensils. The country has recorded nearly 100 cases of Covid-19 and eight deaths.

“They can’t bulk buy and store up supplies because they can only just about afford what is needed for the day. There are no food or grocery deliveries. The borders are shut. Food and supplies are getting more limited, and they are already going up in price, making them even more unaffordable,” says Samoutou-Wong via Skype on the eve of the country’s lockdown.

As soon as it became apparent that Africa would be the next region to face Covid-19, she says, she began speaking to health officials. She and her team have been providing supplies of soap and bleach to the local prison, as well as local nuns from the Order of Mother Teresa, who have taken a vow of poverty.

She has been helping to create and disseminate information about effective preventive measures that people can act on, things that are within their means, and helping to dispel myths.

“I have people who tell me, ‘if you take lemon and garlic, it will prevent you from getting [Covid-19]’. People are so worried because they don’t have masks, they don’t have water,” she says.Working closely with the local authorities and the ministry, New Sight has created resources available in French and Lingala, the local language. And this week, after a discussion with the New Sight board, it launched a Covid-19 Relief for Republic of Congo appeal.

Funds raised will be used to assist the health departments and provide sanitising or medical supplies for those in need.

Two weeks ago, Samoutou-Wong asked her nursing students what they could do to help with the situation. Disheartened that they had no resources, she reminded them of the exponential power of health promotion and discussed how they could get the message out.

The students immediately began drafting a song, incorporating what they’d learned about how to prevent the spread of the virus.

Written on the Monday, the song was polished by Thursday and the following day the students were rehearsing it. They performed an a cappella version of the Lingala song – Congo United vs COVID-19 – with local basketball team The Black Panther Club.

Within a week it was being played on local radio and shared widely on WhatsApp and social media.

Thanks to the catchy song, and leaflets, the message about handwashing reached the community. Within days, the government and enterprising individuals began adapting plastic jerrycans, fitting them with a tap and setting them up outside shops, banks and mobile charging companies, to encourage people to wash their hands before entering. Where soap is available, it is left beside the jerrycan.

“If there’s no soap, then washing powder is put in the water. It’s not great and your hands are left sticky from the soapy water,” Samoutou-Wong says.

The community relies on word of mouth. With schools and churches, the primary platform of communication, closed and many people without access to the internet or television, she hopes that the song will help to spread message and lift people’s spirits.

People are fearful, she says. “They know there is a rich world out there. And to see the rest of the world struggling with this …” her voice trails off.

Samoutou-Wong understands that Covid-19 is an international crisis and globally there are not enough doctors, nurses and hospital beds. But she also has some sobering statistics: Mali, with a population of about 19 million, has 20 ventilators; Uganda has one intensive care unit (ICU) per one million people.

Samoutou-Wong and her husband have decided to stay in the Congo with their three children. Her eldest daughter, who won a scholarship to study in Britain, recently returned to the Congo so they can be together as a family through the lockdown.

Meanwhile, she says she feels homesick for Hong Kong, where her family and loved ones are. Her hometown has always been very supportive of the work she and her husband do in Africa.

“People say Hong Kong is fast-paced and all about finance, but Hongkongers are extremely big-hearted and generous. We are ordinary people and we’ve been able to do what we’ve done because of their generosity. Even in this time, when Hong Kong has problems, we’ve got people reaching out and asking how they can help,” she says.

The lyrics to Congo United vs COVID-19

My brothers and sisters! Listen to this advice

For this illness called Corona

Coronavirus! It can kill

It is everywhere in the world

Brother know that the Coronavirus

Manifests itself by these symptoms

Fever! For some days!

To protect yourself! Here is some advice

Say hello from a distance! Wash your hands

Always with soap! Many times!

Cough into your elbow, my brother!

Stay a distance from each other!

If you have a cough or fever, stay at home

If your breathing is difficult, go to the nearest hospital