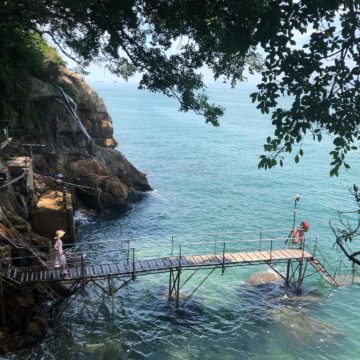 I miss travelling. It has been 13 weeks and three days since my last trip and I’m in withdrawal. I don’t miss hanging around the airport or negotiating elbow space in Economy, but I do miss the thrill of discovering somewhere new. And I know I’m not alone.

The sense of adventure that comes with travel has proven mental health benefits. And if ever there was a time when our emotional well-being could do with a boost, it’s now.

So how can we get the benefits of travel without getting on a plane? The answer is under our noses – discover (or rediscover) our own backyard.

Over the last long weekend, I challenged myself to explore five sites I’d never visited, in the place I’ve called home since I was seven years old – Hong Kong. I was happy to find it gave me many of the positive benefits of overseas travel – excitement, novelty, buzz – without the jet lag.

Negotiating the steep steps down from Victoria Road, you catch a glimpse of turquoise sea between the trees, the water so clear you can see the rocks below – it feels like holiday territory. This patch of coastline is a pocket of Hong Kong frozen in time – the green shed (changing and shower facilities) is perched on the cliff edge, and steps take you down to a narrow pier that allows swimmers to make a graceful entry to the sea.

In the 1960 and ’70s – when there were few public swimming pools – swimming sheds were popular fixtures along the coast, allowing bathers to store their belongings while they went for a swim and the space to shower and change afterwards.

These days it is mostly elderly swimmers who frequent them, and they tend to favour early morning dips. There is no lifeguard on duty – just a life ring on a rope – so if you do take the plunge make sure you are a strong swimmer, and go with company. It’s a beautiful spot and, since it faces west, is a great sunset vantage point.

Getting there: Take the MTR to Kennedy Town, walk westwards along Victoria Road for 15 minutes, and you will see a red and white sign above the entrance to the swimming shed.

When the British naturalist Clarke Abel visited Waterfall Bay in 1817, he described the “beautiful cascade which rolled over a fine blue rock into the sea”. Two years later, a Chinese writer who edited a guide to Xinan County, which included present-day Hong Kong and Shenzhen, listed the waterfall as one of the “Eight Kings of Xinan”.

Two hundred years on and both those descriptions are still apt – fresh water falls 15 metres (49 feet) down a sheer cliff face into the lagoon below. An enchanting spot, it could be a scene from Alex Garland’s 1996 novel The Beach.

The waterfall used to be well known to pirates and sailors, who visited to stock up on fresh water. These days it is hikers and families who come to enjoy the view and relax on the beach.

It is sufficiently off the beaten track that even on weekends it’s not too crowded. The waterfall is not protected by a safety rail – which makes for great views out to sea – but take good care, especially if you are with children, as there have been a couple of fatal accidents.

Getting there: From Kennedy Town, take a 58 minibus or taxi to Cyberport Waterfront Park, walk along Cyberport Road for about five minutes, keeping to the pavement on the right to enjoy the coastal views. When the road curves to the left, you’ll see a waist-height metal fence on your right; climb over the fence and follow the path to the waterfall.

If you continue along the path from Waterfall Bay, within 20 minutes you will reach an unusual sight – thousands of ceramic Buddha figures (and other gods) cemented onto the side of a slope overlooking the sea.

The reason for this curious scene? When a deity statue is accidentally damaged, it is considered bad luck to throw it away, so they are left on the side of the road. Some 20 years ago, an elderly man living in nearby Wah Fu is said to have started collecting the broken and chipped figures, fixing them, and cementing them onto the slopes and rocky outcrops.

It is an all-faiths affair, with statues of Kwan Tai, Kwun Yum and other Chinese gods alongside Thai Buddhas and a few Virgin Marys. Volunteers look after the collection, and when my hiking companion and I visited, an elderly man was repairing a small statue that had been left at the site overnight. A couple of devotees had lit incense sticks; the fragrance was carried on the sea breeze. A very peaceful spot.

Getting there: Either continue along the coastal trail from the waterfall, or take a 23 minibus from Kennedy Town to Wah Fu shopping centre and from there it is a five-minute walk to Waterfall Bay Park; the “sky full of gods and Buddhas”, as they are known locally, is to the left, in the direction of Aberdeen.

4. Flamingos in the city

I had no idea that Hong Kong is home to a flamboyance of flamingos and was blown away when we cut through Kowloon Park and stumbled across dozens of the beautiful pink birds, which were introduced to the Bird Lake 31 years ago.

Flamingos are group creatures and always stay together, which makes for a dramatic sight, especially at dusk when they are preening before bed.

While you are in the park, it is worth dropping by the Kowloon Mosque, built in 1984 and the largest Islamic centre of worship in Hong Kong. (Take note that the hall on the ground floor is for men, and the room on the first floor is for women).

Getting there: Take the MTR to Tsim Sha Tsui station Exit A1 or Jordan Station Exit C1 and follow the signs to the Bird Lake.

If it was easy to get to Po Toi Island, it would not be the gem that it is, so do not begrudge the journey there. If you are lucky enough to have a friend with a sailing boat or junk, you can make your way there in style, but if not the public ferry does the trick.

This is Hong Kong’s southernmost island and it is made up almost entirely of well-weathered granite, which makes for some interesting-shaped rocks and is a magnet for landscape photographers.

The highlight of a trip to Po Toi is a leisurely lunch at Ming Kee Restaurant. The fried squid is phenomenal, the best I have had in Hong Kong. It is very popular at weekends and on public holidays, so you will need to book ahead to be sure of a table (tel: 2849 7038). You can bring your own wine (for a small corkage fee).

Lunch tastes better if you feel like you have earned it – this makes for a guilt-free second helping of deep-fried tofu – so get there a couple of hours ahead of your reservation and take a stroll around the island. It is a small island, so you will be hard pushed to get lost. The most popular trail is probably the one to the lighthouse.

All the trails are well signposted. If you have got cabin fever after months of mask-wearing confinement, a trip to the island fondly known as the “South Pole of Hong Kong” will be sure to remedy that.Getting there: The round-trip ferry from Aberdeen to Po Toi island costs HK$50 (cash only, no Octopus card). There are very few ferries, so check the timetable carefully.