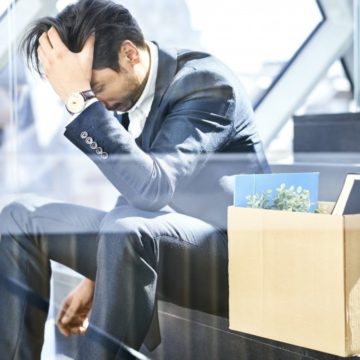 Getting over the shock of losing your job takes time, and perhaps professional help. It could be a chance to retrain, switch careers and do something you love

When Mark was called into his boss’ office two weeks ago, he had a suspicion that his job was on the line. The small Hong Kong design firm had lost a number of big contracts, and as the most recent hire, he knew he was likely to be the first to be laid off. The news still came as a shock.

“I felt like I’d been punched in the stomach. I knew it was on the cards, but it didn’t hit me until I was sitting in his office,” says the 40-something expat, who does not want to reveal his last name.

Hong Kong’s unemployment rate hit a 15-year high of 5.9 per cent in the March to May period this year, following a year of anti-government protests, the protracted US-China trade war and more lately the Covid-19 pandemic.

The city’s Employment Support Scheme (ESS), through which the government is paying up to 50 per cent of workers’ salaries for half a year, capped at HK$9,000 (US$1,160) a month provided staff are retained, has shown signs of having a positive effect, but it has still not stemmed the flow of job losses.

Mark had been with his firm less than a year, so he does not qualify for statutory payment allowance given to staff with two years or more service.

Kathryn Weaver, a partner at law firm Lewis Silkin, International Employment Law, sees cause for optimism in the strong uptake of the ESS, and hopes it will mean a slowdown in redundancies as firms on the scheme are committed not to lay off staff from June to August. But if anyone fears their job is at risk, she advises they get prepared and have a checklist to hand of things to discuss in the redundancy meeting.

“A bit of a trend recently is of employers offering outplacement services. This might mean helping a person to draft their CV, interview training and support in getting the next job,” she says.

Anyone made redundant must allow for a period of adjustment, and Angela Watkins, psychologist at counselling service Red Door, likens it to the stages of grief. “It’s an emotional journey. There may be feelings of sadness or shame or grief or anger. It’s best to allow yourself to work through those stages. You do not want to get stuck in the stage of grief or anger,” she says.

Allison Heiliczer, a psychotherapist and head of corporate psychology at mental awareness clinic MindWorx OT&P, says the bombshell of redundancy often catapults a person into shock. Her first step is to normalise the panic.

“There is good reason to feel the panic. It’s what you do with it; don’t catastrophise it. One of the things that causes them to spin [out of control] is because they think it’s forever. I remind them that this will not last forever,” she says.

A redundancy can be viewed as an opportunity for a person to reflect on what they really want to do with their life. Heiliczer calls it chance to “hit the pause button” and consider some of the big existential questions. For some expats, this might mean questioning whether they want to continue living away from their home country. For others, it might mean retraining and a big career change.

“It’s not everyone who can do what they love, that’s a privilege, but it’s worthwhile to reflect that we have one chance at this,” she says.

Watkins walks clients through this brainstorming phase by asking questions such as, “What would make your heart sing?” and employing the Myers-Briggs Indicator, a systematic breakdown of personality types, to help a person who does not know what they want to do.

It’s also a chance to consider whether the job you’ve been doing still exists in the same model. Is it time for a change? “If we go into an economic downturn cycle and people aren’t hiring those traditional banking people, what are your options?” Watkins says.

Even if it’s not financially feasible for a person to switch careers – from a well-paid legal professional to a journalist, for example – they might see if there are some qualities of their dream job that they can adopt.

Watkins went through the re-evaluation process with a banker. He wanted to become a teacher, and although he ultimately decided to remain in banking, he now also does more training in his role and also volunteers for his university alumni organisation, which helps satisfy those needs.

Workers made redundant often feel shameful, and Watkins says many are reluctant to share the bad news with relatives and partners. She advises people to tell their loved ones, as part of the solution, seeing it as a good opportunity for family models to become updated.

Heiliczer says she noticed shame associated with redundancy more often in men, who are reluctant to share the news that they have been laid off.

“They may be thinking, ‘I came to Hong Kong, I validated my existence and identity, kept up with the Joneses, and HR called me at 9am and that all changed in a second’,” she says.

Heiliczer explains that redundancy isn’t just about losing a monthly salary; it is often closely tied to a sense of identity. Peek under the bonnet, she says, and other issues will often arise, such as stresses in a marriage where the daily work routine provided an escape. Such issues can push people to seek therapy for the first time in their life and the sense of urgency can lead to powerful shifts.

“With the luxury of time and money, people might sit in therapy for years, but if there’s a healthy pressure to make therapy effective it can be very goal oriented.”

Watkins advises those who have recently been let go to reach out for support, especially if they are stuck in feelings of grief or anger. Speaking to a counsellor or coach will help work through feelings more quickly so a person can get on with the next stage of their life. Large firms and multinationals often offer redundancy counselling through an external provider. If that’s on the table, she recommends taking it.

“No harm comes from having the conversation. It’s usually a force for good,” Watkins says.

While summers have typically been a quiet time for counsellors as many expats leave Hong Kong on holiday, Heiliczer expects this summer to be busy.

“Now that people can’t go away, some are thinking, ‘I may as well deal with my marriage, my job’. People are energised to finally do work in therapy,” she says.

What to have on your redundancy checklist

“If you feel that redundancy is on the horizon, it’s good to have a checklist ready of things to ask your employer in case you get called into a meeting,” says Kathryn Weaver, employment partner at Lewis Silkin in Hong Kong.

1. If you want to keep your job, consider asking your employer: “Have you considered alternatives to redundancy, like hiring freezes or cutting other expenses?” Or you could offer to work reduced hours or take an unpaid sabbatical if it means keeping your job.

2. Ask if your employer has applied for the government’s Employment Support Scheme. If they have, you may want to remind them of their undertaking not to make any redundancies during the subsidy period.

4. Ask for a breakdown of the termination payments your employer intends to make to you in writing, so you can later check these are all correct.

5. Ask whether your employer provides outplacement services (for example third-party help with CV drafting and interview preparation) or other benefits to employees facing redundancy.

6. If you have restrictive covenants in your employment contract, such as an obligation not to join a competitor after termination, ask if these can be waived in the circumstances.