Home / Mental Health / Tap into the healing power of creativity 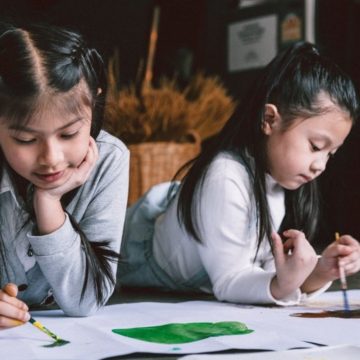 Art in all its forms is therapeutic and can be used as a way to channel pain and suffering into some creative and inspiring, experts on mental health say

With many in Hong Kong reeling from the impact of last year’s pro-democracy protests and the coronavirus pandemic, a panel of mental health professionals and an artist recently pointed to the transformative and healing power of art.

Massive societal change is stressful and people usually resolve that stress by channelling it into an activity or even running away, but the restrictions imposed to curb the spread of Covid-19 make that difficult, says Dr Elisabeth Wong, a psychiatrist and adviser at Mind HK.

“With Covid-19 all of us are stagnant and that process alone poses tremendous mental health challenges. It’s a universal experience and all of us are suffering to some degree,” says Wong.

She was speaking at the Goethe-Institut in the city’s Wan Chai district, where she was one of four panellists who met to discuss the topic “Civil Society, Art and Mental Balance” last month. She noted that the worldwide trend towards crafting and baking during lockdowns for Covid-19 spoke to the universal urge to cope with uncertainty and fear by doing something creative and productive.

Brenda Scofield, chairwoman of the suicide prevention non-governmental organisation Samaritans, says the charity’s hotline has seen an increase in traffic, with many of the calls driven by uncertainty and a fear of the unknown.

“The number of young people now who are calling is greater, their distress is greater. For everyone simply there isn’t a light at the end of the tunnel,” says Scofield.

“Children – young people, students – are being seen as performers so often by their families, and people have not got the listening the skills to recognise the early signs of depression and distress in them.” The youngest caller was just seven years old.

Professor Ng Siu-man, the deputy head of the Department of Social Work and Social Administration at Hong Kong University, is a leading expert on health and social work.

His team conducted a number of surveys in Hong Kong and mainland China on the impact of Covid-19 on mental health. His findings echoed other studies which a point to a 20 to 30 per cent increase in the prevalence of post-traumatic stress, depression and anxiety during the pandemic.

“We shouldn’t over-label these people with a mental disorder, it’s a normal reaction to this situation, but it doesn’t mean they don’t need help,” says Ng.

He noted that while the protests, which caused disagreements in families, and Covid-19 could both lead to post-traumatic stress, the impact of man-made disasters was usually longer lasting than that of natural disasters.

“With the protests, the most damaging aspect is that it creates intergroup conflict and hatred and that will take a long time to heal,” says Ng.

Wong Ka-ying, a Hong Kong artist and curator in her late 20s, says that she is aware of an increase in mental health issues among her peer group.

She points not only to the social movement and pandemic, but also to high unemployment and the seemingly hopeless future for young people in Hong Kong. She says young people feel older people often lack understanding.

“We are seeking empathy, not sympathy. As a creator myself, I’m creating art as a way to generate questions and to consolidate observations. Art is a bridge to connect people,” she says.

To that end, Wong Ka-ying curated a companion exhibition – which ran alongside the Goethe-Institut’s mental health talks – called “Tongueless”, which drew on the work of six Hong Kong artists, each of whom explored a personal and raw journey through identity, grief or loss.

“I’m glad that we can channel our pain and suffering into art, but it’s also important to know – and a reason why we do this sharing – that we are not alone, that there is someone to hear us and listen,” she says. Art in all its various forms can be therapeutic. Dr Wong says she learned of its transformative power from her patients.

“Everyone will instinctively find a way to sublimate the pain and suffering, it is amazing and underrated. It’s not about the skills or techniques, it’s just the act of creating,” says Dr Wong.

There is a tendency for people to employ distraction techniques – back-to-back Netflix viewing or gaming, for example – to try to avoid difficult issues and feelings. Artistic creation, whether it be painting, pottery or dance, is an opportunity to work through painful and conflicting emotions. Dr Wong advises that you take your time.

“Rather than rush to the next thing to do, the first step from an emotionally healthy point of view is to stay with the emotions and let them marinate a bit. They are trying to tell you something. Don’t negate what you are feeling,” she says.

Scofield, whose first career was as a drama teacher at Island School, part of the network of English Schools Foundation fee-paying schools in Hong Kong, before she founded her Fetish Fashion store and become a counsellor specialising in sexual and gender diversity, says drama can be liberating.

“I found how you teach drama, allowing students to express themselves within drama and explore nitty gritty subjects, can be powerful,” she says.

Noting the unusual number of rainbows seen in Hong Kong over the summer, Dr Wong recalled Danish-Icelandic artist Olafur Eliasson’s work on rainbows. Although we gaze at rainbows in awe, he showed they are dependent on just water drops, light and the angle of your eye.

“If you have those three components in place then you will get a rainbow. Everyone’s angle of the eye is different, so everyone’s rainbow is different. Without the spectator there is no art,” says Dr Wong.

While Ng’s survey findings point to an increase in mental health issues, he is reassured by a noted increase in what he refers to as “post traumatic growth”, meaning the positive aspects and learning that sometimes follow a traumatic event.

He divides these into four areas: personal growth, interpersonal, spiritual and life orientation. He encourages participation in multichannel art – using any art form that feels comfortable.

“Art could be many things related to daily life. The important thing is the need to slow down, increase our awareness, observe, appreciate,” says Ng.

Dr Wong seconds that. “Art is the best way to transform mental distress. We don’t have to be ill,” she says.