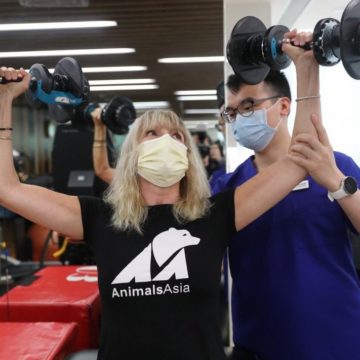 Known as the silent disease, it is caused by a drop in bone density. Lifestyle changes can build it back up, as can exercise, a doctor and a therapist explain

In October 2018, Jill Robinson, founder and director of Hong Kong-based charity Animals Asia, was on holiday with her family in Mauritius. Up bright and early, she headed to the beach and was dragging a heavy sunbed when she slipped in the sand and fell on her bottom.

“I heard something “pop” and was in agonising pain, I knew I’d broken something,” says Robinson.

Ordinarily, a relatively minor fall (she hadn’t fallen far, and landed on sand) wouldn’t have been a problem, but Robinson, who had just turned 60, did not realise she had developed osteoporosis. This disease occurs when the body loses too much bone, makes too little bone, or both. It is often called the “silent” disease because there are typically no symptoms until a bone breaks or one more vertebrae fracture.

After four days in a Mauritian clinic where the doctors were kind but not necessarily well equipped to deal with spinal injuries – “I was moved around in a sheet,” says Robinson – she was medevacked back to Hong Kong. There, she had to have surgery for the lowest thoracic vertebrae in her spine, the T12.

“It had smashed like a cupcake and there were fragments touching my spinal cord and causing numbness in my legs, so they said there was no alternative,” says Robinson.

The surgeon put a rod and pins into her spine and she also had a Dexa scan, an X-ray that measures your bone mineral density (BMD). It revealed severe osteoporosis in her spine.

Robinson has agreed to share her story to make more women aware of this silent disease so they will not ignore early warning signals as she did.

Several years before her fall, she did have a Dexa test which showed mild osteopenia (loss of bone mass), but she was busy with work and life, and didn’t get around to looking into it. It wasn’t causing her any problems. And a year before the Mauritian trip she broke her wrist, which should have been a warning flag and signal to get another Dexa test, but she didn’t think of it and her surgeon didn’t suggest it.

Robinson went overnight from being a fit and active person to dealing with the pain and trauma of recovering from a broken back and facing a diagnosis of severe osteoporosis. The first six months of recovery were difficult, but she set out to learn all she could about her condition.

The good news is that if you are prepared to put in the work, it is possible to improve bone density. And Robinson did just that. With a combination of medication, daily exercise and lifestyle changes, she has improved her Dexa score on her spine from -4 to -2.8. “Every doctor I’ve spoken to is using the word ‘remarkable’ or ‘spectacular’,” says Robinson.

Robinson undergoes a therapy session with her physiotherapist Wong Man-ho at Virtus, a gym in Hong Kong’s Central district. Photo: Edmond So

Initially, she was put on Forteo for two years (a self-administered daily injection of the hormone teriparatide), which can help reduce the risk of another fracture, followed by a single injection every six months of Prolia, also used to increase bone density. She goes to physio once a week and does 60 minutes to two hours of exercise a day, on an exercise bike or walking, and weight-bearing exercises.

She has also changed her diet, cutting out coffee and carbonated drinks, dramatically reducing salt and sugar intake, and only has a few pieces of chocolate a week and a glass of wine at the weekend.

“I eat a lot of plant-based calcium and protein, have tons of kale and leafy green vegetables, soy milk enriched with protein, nuts, and a protein powder shake every day with chia seeds, flaxseeds, prunes, figs and lemon,” she says.

Osteoporosis affects men and women, but women are more at risk, particularly as they enter menopause, because their bodies do not produce enough of the hormone oestrogen.

“Bone mineral density declines with age and menopause,” says Dr Norman Chan, a specialist in endocrinology who treated Robinson and runs a bone health programme at his clinic in Central.

“Osteoporosis is very much neglected in Hong Kong. In the government setting, it may be a cost issue for asymptomatic diseases. And in the private setting, patients don’t come forward until they have a fracture,” says Chan.

Bone mineral density is only part of the risk equation for fractures; body architecture also plays a role. Women who are slim are more at risk. This is in part because a person with a heavier build puts more pressure on their bones, which stimulates bone growth.

This writer was diagnosed with mild osteopenia two years ago and a recent Dexa scan showed my T-score had fallen significantly, so I was eager to learn what I can do to improve my bone density.

Dr Chung Wai-man, chief physiotherapist at Virtus Medical Group in Central, says weight-bearing exercises are essential to stimulate bone growth and conserve bone density. He recommends hiking, jogging or rope jumping. For others, tai chi may be more suitable; it also helps improve balance and reduce the risk of a fall.

“Muscle strength is important to ensure good mobility to prevent falls. And you also want some flexibility training, stretching the lower calf and ankle region, because as we get older the lower leg can get tighter, which makes it easier to fall,” he says.

If someone has already had a fracture as the result of a fall, weight-bearing exercises may be too challenging. Instead Man recommends swimming, and then as the bone condition improves adding some very focused training. He also advocates vibration therapy, a treatment devised by Nasa-funded doctors to reverse bone loss experienced by astronauts in space.

“There has been a lot of research in this area and they found that some vibrations are better than others at stimulating the bones,” he says.

Charlotte Douglas, one of a few yoga therapists in Hong Kong certified by the International Association of Yoga Therapy, points to 10-year study which found that a 12-minute daily yoga regimen was able to reverse osteoporotic bone loss. She suggests a warm-up practice, using small repetitive motions, before doing the 12 minutes of yoga.

“Putting weight onto the body and resisting gravity can help the bone to increase bone density. Holding a posture, as suggested in research, helps to strengthen the bones. That’s why it works; 12 minutes isn’t long, most people can find the time,” says Douglas.

She advises against high-impact exercises, which may cause compression and risk fracture, and suggests using resistance bands which create resistance and give a little feedback.

“What we know is that weight-bearing exercise is key, I believe that resistance bands are brilliant and that using the body weight to resist gravity can be very helpful,” she adds.

“An [osteopenia] diagnosis can create a sense of fear that you might hurt yourself. Improving everyday movement by paying attention to the way we do it and practising in either a yoga studio or working with a trainer to find more coherent and integrated forms of movement can open up your world, rather than fear making it smaller,” says Douglas.

Robinson urges all women, particularly those around the age at which menopause occurs, to take their bone health seriously. “I was so stupid not to have listened to the first Dexa because I was fairly young and fit. I’ve learned so much. You might feel great, but your bones might be like chalk,” she says.