Home / Health / A high intensity workout without the effort 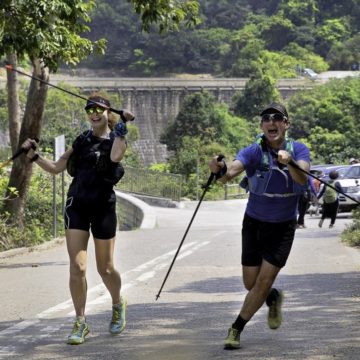 Former jockey turned triathlete and ultramarathon runner Jo Lodder, 50, broke his collarbone in a fall, and was frustrated at how slowly it was mending. He tried the Vasper System, based on Nasa spacesuit cooling, which applies liquid cooling and compression to your muscles, and was amazed with the results

Jo Lodder was a professional jockey for 11 years before moving into property in 1997, so he knows a thing or two about broken bones. When he came off his mountain bike and broke his collarbone on a trail on Lantau, Hong Kong’s biggest island, in October 2020, it was the first time he’d broken a bone outside horse racing.

The triathlon was a challenge to celebrate his 50th birthday and when he made it to the finish – he cycled and ran another 45km after the fall – he had a swift beer with friends and went straight to hospital.

“I was used to it healing and just getting back on a horse, but I was getting X-rays from the hospital and they were saying it wasn’t mending,” says Lodder, who was born in the UK and has lived in Hong Kong since 2009.

One of the challenges of recovering from injury is getting the right balance between encouraging repair and discouraging damage. Take common injuries, such as a twisted ankle or torn hamstring: at the acute stage the secret is to keep within the pain-free range of movement. Any pain is opening the wound back up.

The Vasper system is based on Nasa technology used to cool astronauts’ spacesuits. Photo: Getty Images

“We have to create the environment for healing, the body knows what to do. We want to encourage the drainage of the fluid; gentle movement encourages the healing,” says Philip Clarke, principal osteopath at The Clarke Clinic in the city’s Central district.

When a person is in recovery and not able to exercise and move in their usual way, they begin to lose muscle mass. There is also often wariness about further injury, and the awareness that their core and ankle stability can go.

Two months after Lodder’s fall, he was getting frustrated at the seemingly slow pace of his recovery.

“The specialist was saying be careful because you are weak. As you get older it takes longer to mend and you need a bit of help,” says Lodder.

For the former jockey, that help came by way of the Vasper System, a revolutionary technology that was originally designed to chill the spacesuits worn by Nasa astronauts. Two Vasper bikes arrived at Clarke Clinic in Central in December, the only ones in Hong Kong.

Vasper – from “vascular performance” – is designed to speed up muscular performance and recovery from injury. It works by using three scientifically proven principles – compression technology, cooling, and interval training. Compression and cooling create the effect of a high intensity (anaerobic) exercise without the time, effort, and muscle damage it takes to achieve the same results with conventional exercise.

Lodder used the bikes intensively – four times a week – for two weeks and says he felt noticeably better. He was able to get back out on the trails and begin training for a four-day, 300km charity run scheduled for the end of March.

“There is no pressure on the body when you are using it and with the coldness you are able to go harder,” says Lodder.

Clarke explains that because you are sitting down when using the Vasper and your foot is flat against the metal plate, the risk of injury is almost zero.

“It is very good at addressing left/right imbalances because it gives constant feedback on how you are using your body and how much force you are generating,” says Clarke.

A client with Parkinson’s disease – a brain disorder that leads to shaking, stiffness, and difficulty with walking, balance, and coordination – is seeing good results, as he is able to exercise in a safe environment and the cooling and compression system reduces inflammation.

This writer took the Vasper for a test drive guided by Esther Fok, the clinic’s Vasper specialist, who was trained at the Vasper Systems headquarters at the Nasa Centre in California. I sit on the bike – which is a little like a cross trainer – and put my bare feet flat on the metal plates. Then Fok straps four blue cuffs around my thighs and upper arms and turns on the cooling system. The seat and cuffs quickly fill with cold liquid.

The 21-minute exercise programme begins with a long warm-up and then moves through a series of seven high-interval workouts lasting about 30 seconds each. Despite the fact I’m pumping my arms and legs as hard as I can, I don’t sweat, and my heart rate isn’t elevated.

Fok explains that the system cools and compresses your muscles during the workout to keep lactic acid from building up, and this is what tricks the body into releasing extra doses of natural growth hormones that build muscle and bone.

From there, I move through to the next room for a nine-minute lie down on a chilled bed – it prompts a flashback to a night spent at Sweden’s Ice Hotel – and then I’m done. I feel pretty good thanks to the endorphins – and the next day have no muscle ache or soreness.

I check in with Lodder to see how he did on his four-day, 300km charity run. The race with fellow runner Catherine Cormack started off well and they did the first 100km in 21 hours, but then he injured his knee. After the second day, he thought he’d have to pull out. Instead, he scheduled an emergency therapy session on the third day with Clarke, who set him right, enabling him to return to the trail to finish the race.

“The reality is I couldn’t have done it without Philip. I went from not being able to walk to doing another 70km. The Vasper is great, but you need the magic fingers as well – the two together are just incredible,” says Lodder.