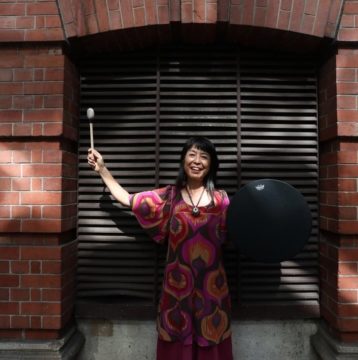 Spirited away: I was born in Warabi city, in Saitama prefecture, Japan, in 1964. My parents divorced when I was six and my little brother was three. In those days, getting divorced was quite shocking and we moved with my mum to her parents’ place. One day, my dad tried to kidnap my brother. He didn’t manage to get him because my grandmother was protecting him, so he took me. Later, my mother decided it was better that at least us siblings weren’t separated, so she brought my brother to him.

Luckily, my grandmother was in the house, a female figure, but she was also tough, too. We didn’t see my mother and were forbidden to even say her name. It wasn’t until I was 20 that my mother wrote to me and we met up. Music has always been a part of my life. I played classical piano from the age of three to 17.

In primary school, I had a young male music teacher who had long hair and was in a band. I attended an after-school music club that he ran. It was very exciting. Growing up, I was always in a band playing keyboard, guitar or drums. Of course, my dad didn’t like it.

Tasting the Big Apple: I finished high school at 18 and was determined to get away from my controlling dad. I got a job at a business consulting firm. It was a five-day week and the salary was good, but I quickly realised it wasn’t for me. It was a male-dominated world and I was mostly serving tea and changing ashtrays. I was often in tears by the end of the day and lasted just three months. My boyfriend at the time was in fashion and I got a job in fashion, too, although I soon realised only a handful of people do the creative work.

When I was 20, my father died. Not so long after that, a fashion stylist friend who was living in New York came back to Tokyo to deliver her baby and let me sublet her Manhattan apartment. I had such a good three months there and met so many people. New York made a real impression on me. I decided I wanted to study English and get into that kind of creative world because I felt very confined in Japan.

Duty of care: When I got back from New York, my grandmother was very weak. I expect it was partly the pain of her own child dying before her. She said, “Find me a nursing home, I don’t want to trouble you.” We were only able to find a bed in a place very far away, in the countryside. The day before she was due to move to the home, I realised I couldn’t do that to her and quit my job to stay home and look after her.

While many of my friends were at university or karaoke or partying, I was looking after an old person, changing her nappies and mashing pumpkins for her to eat. I had lots of time to think and thought a lot about life and death. I also read lots, and read the newspaper from beginning to end; I became very knowledgeable about what was happening in the world. I am so glad I looked after her for those two years.

In 1989, a bed became available in a home and she took it. My artist boyfriend, who I’d met in Tokyo, said he was having an art exhibition in Hong Kong and suggested I come with him. My uncles and aunties all told me I deserved a break and should go to Hong Kong and enjoy myself – I did, and I still am.

Free bird: My boyfriend had a sail boat, which was usually anchored in Yung Shue Wan Bay, and we’d take the dingy to shore. It was a very expat crowd on Lamma Island, and I made lots of friends. I went back and forth between Hong Kong and Tokyo and, in 1990, decided to move to Hong Kong. Lamma opened up a free way to live, I felt like I was stripping off the chains of being raised in my father’s regimented household in Tokyo.

For a year I joined Chris B’s all-girl band Sisters of Sharon, playing keyboard and drums – we had fun. It was an organic community. We’d have a beach festival together, do a Christmas pantomime each year. And I enjoyed the nature of Hong Kong. I had a boyfriend who was a boat carpenter and, in 1991, he built a large tepee at the back of our house on Lamma.

A lot of people would come to the tepee and we would stay up late talking, playing music and drums. Wedding ceremonies were held there, and overseas artists would hear about the tepee and come and join us for an after-party. I didn’t officially start drum jam until 2001, but the seed was planted in that tepee, it was very experimental.

Teepee party: Drumming was a natural way for me to communicate – I speak Japanese, I speak English, and I speak rhythm. World music was taking off, my boyfriend at the time was learning percussion and formed a band, and Professor Wing (Dr Lung Heung-wing), the principal percussionist at the Hong Kong Philharmonic Orchestra, who taught at the Academy for Performing Arts, formed a group called Island Sun Drum, which I joined.

In 1999, I had met a Senegalese guy, Mamadou Mbaye, at one of the drum sessions. He was from Gorée Island, off the coast of Senegal, and I showed him the Lamma tepee, which he loved. That friendship led me to Africa. I really enjoyed travelling to Africa and started going every year to different countries. I’d go for a solo trip for a few months and learn a lot more about drumming. I’d often end up living with my teacher’s family or their neighbours, it was a real community. I loved being in the rural villages and watching the rhythms in their ceremonies and day-to-day lives.

In 2001, I began facilitating a monthly drumming group on a Sunday outside the Hong Kong Cultural Centre as part of the regular Tom Lee Music Carnival, supported by the Leisure and Cultural Services Department. People of all ages would come, everyone was smiling. I ran it for 18 years. It was a great opportunity for me to serve the community. The drumming grew, there was no stopping it. Many organisations, corporations, charities and schools hear about me and ask me to facilitate a drum jam. Banks have even brought me in to run a session to help problem-solve between departments.

Finding fulfilment: In 2004, I got malaria in Africa and when I got back to Hong Kong, I was very ill. I was in the ICU at Princess Margaret Hospital for four days and the doctor thought I might not make it and asked me to gather my family. I called my mum. I was gasping for air and struggling to breathe and my voice was very husky. My mother thought it was a pervert calling and hung up on me. That happened twice. Luckily, I survived.

I decided to have a break from going to Africa, and that year I got pregnant and had a baby girl, Aya. The father was an English friend. We didn’t marry. I’m so glad I became a mum because I never had a mum myself. My life felt fulfilled with her. I live in Pui O, on Lantau Island. There’s a real community there, it’s a great environment to raise a child. As a single mum, I really believe it takes a whole village to raise a child.

That’s my jam: Drumming has gone mainstream. It’s no longer just a hippy thing; it benefits so many people. In the past three decades, group drumming has been studied by neuroscientists who have found that it can reduce the stress response at a genetic level. I’m a trained HealthRhythms facilitator, an evidenced-based protocol for wellness, and I’ve been doing that online for people from different walks of life. I even take people forest bathing online using guided imagery drumming – it’s pretty creative.

During Covid-19, of course, the face-to-face drum jam isn’t happening, but it’s a nice time to stop and reflect, go deeper and do things differently. I’ve been making videos and speaking at international online conferences – it’s given me different opportunities. Right now, people can’t travel much, so there’s a thirst for cultural connection.