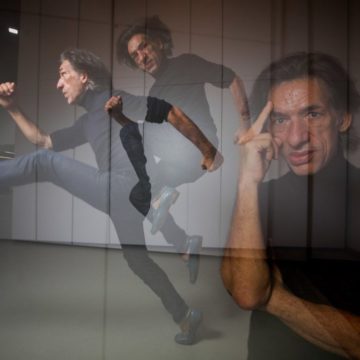 Septime Webre speaks to Kate Whitehead about growing up in the Bahamas and turning his back on law for dance. The new father, artistic director of the Hong Kong Ballet since 2017, is thankful for being able to spend time with his family during the pandemic

The seventh son: I’m the seventh son in a family of eight brothers and one sister. My six older brothers were all born and brought up in Cuba. My mother was Cuban and my father American. They left Cuba during the revolution and I was born in the United States soon after they arrived in the early 1960s.

As a small child, we moved to the Bahamas and my first memories are of a beautiful island with a gorgeous white beach and blue water. There were only four kids in my class at school. My dad had a sugar plantation in Cuba and was an engineer who designed sugar mills.

After the revolution, we lived wherever there was a sugar mill to design, which meant tropical climates. From the Bahamas, we moved to south Texas, on the Texas-Mexico border, when I was 12. During the Texas years, my family spent a lot of time in Africa – three years in Cote d’Ivoire and five years in Sudan.

Born performer: As a small child, on Saturday nights we’d push back the sofas and my father would play his old Cuban records and we’d have a salsa party. I was naturally drawn to performance. At school I’d organise a talent show, at church I’d organise the midnight mass pageant, I played in the marching band in south Texas at the American football game on Friday night.

I never thought you could have a career in dance. I came from a family that expected us to go to law school or medical school or be an engineer. As a good Catholic boy, the seventh child is the one selected to be a Jesuit priest. When I was 15, I realised that was not on the cards and told everyone that I’d be a lawyer, that was politically correct in my family. I followed my sister to ballet school and had my first class when I was about 12. I didn’t get serious about it until my later teens.

Laying down the law: My plan was to go to law school. In the American system you go to undergraduate school for four years and law school for three. I did my undergraduate years, studying history and pre-law, and also trained 25 to 30 hours a week in classical ballet. Three weeks before I was due to start law school, I got a job offer from Ballet Austin, so I deferred law school and didn’t tell my parents.

The ballet job started on a Monday and on the Friday night, driving home on my 1980s moped, I knew this was what I wanted to do, it felt right. I decided I’d finish the contract I’d just signed and then move to New York to pursue ballet. And that’s what I did. After the Ballet Austin contract was up, I moved to New York, stayed at my brother’s place on a mattress on the floor, and got a job dancing at the American Repertory Ballet.

Suddenly, I was a New York-based professional ballet dancer. I moved to the East Village and was a club kid by night but by day a ballet dancer. I started choreographing and would grab dancers from the American Ballet Theatre and the New York City Ballet on their summer holiday and put together New York seasons. I started to get attention as a choreographer. That was fun. For just under a year, I left ballet and danced for the father of postmodern dance, Merce Cunningham. He famously created his whole body of work in silence and the music would be created on the side.

Poise for effect: In my 20s, I was experi­menting, knowing that I wanted to live in the ballet world not the contemporary dance world but interested in new ideas. I was very driven and worked hard and played hard. For so many people who come from families that expect great academic things from them but choose an alternate path, it’s an act of rebellion and they relish the bohemian existence.

I certainly had fun doing that, but I suspect there was something inside of me that, by deciding not to pursue this professional path and seeing my siblings do well in their pursuits, drove me to prove that I could be successful on this unorthodox path and make a difference in this world.

The medium of dance: At the age of 30, I was offered an artistic directorship at the American Repertory Ballet, based in Princeton, New Jersey, directing one of the largest ballet schools in America. Every Sunday night on my call home my cute Cuban mother would say, “Yes, darling, I read that story about you in The New York Times, but you could still go to law school at night in Princeton, I’m sure they’ll let you in.”

Webre works on The Nutcracker at the Washington Ballet, in 2015. Photo: Getty Images

Flex appeal: For about 10 years I was working hard and having fun. I was directing and choreographing and was like a maniac running between the studio and the boardroom, but not doing much for my own body. Then I turned 40 and thought, “This is not sustainable, I need to do something for myself.” I became a very serious yoga person – Ashtanga yoga – and that made a big difference and allowed me to focus. I became more flexible in my 40s than I was as a dancer in my 20s.

And baby makes three: I met my husband in 2011, in Washington DC; this is our 10th year. He is a teacher and was in the process of moving from San Francisco to New York and had the freedom of a summer so was staying with his brother who worked for the US State Department. We met on the way to the grocery store one Saturday afternoon and had a proper date the next night. The following day he went to Paris for a two-week holiday. When he came back, we were boyfriends within three days.

We got married six years later, in June 2017, the month before we moved to Hong Kong, where I took up the position of artistic director of the Hong Kong Ballet. We live in Mid-Levels and in July last year had a son, Axel. He’s eight months old and is a joy. Hong Kong is a great place for kids. We had our son later in life, so we are wiser, and it’s been great to nest with Axel during the pandemic.

Ballet@Home: Hong Kong Ballet is a beautiful company and was already one of Asia’s premier ballet companies. My goal was to inject some new energy and ensure that not only is it one of Asia’s premier ballet companies, but also one of its most forward-thinking. I wanted to connect the company more firmly to the community. We invested in a lot of repertoire and created a lot more new work. We launched a programme called “Ballet in the City”, a series of large-scale pop-up performances in unexpected places, and created a lot of digital content.

Because of the pandemic, we have done a huge amount of new work, but it’s been digital. Last March, we launched HKBallet@Home and about 1.2 million people have viewed those programmes this year. This is a brave new world where we are impacting the world through digital content, an amazing new way to connect with people.