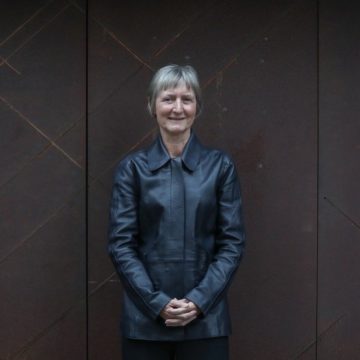 Upon receiving the devastating news, Ann Pearce says she knew she had to do something. She founded Weez Project to raise awareness about youth suicide and youth mental health

Government work: My father was a tax inspector. He and my mother moved around a bit and I was born in Bexley, Kent (in southern England), in 1961. I went to school in Bexley and we then moved to Crawley, in Sussex, and then Bromley, where I did my A-levels.

I had a great history teacher and was introduced to politics by a great politics teacher. It opened my eyes to the big world. In 1983, I went to the University of Manchester to study politics and modern history. After graduation, I dropped into the civil service and worked for the city council in Manchester and then moved to London and worked for the Department for Employment.

It was interesting to be on the inside and see what goes on in government. As officers, we did the research so that ministers could answer the questions at PMQ (Prime Minister’s Questions). It was fascinating to see the process, but I didn’t stay long because I found it a bit stiff and bureaucratic and I wanted to be in a more dynamic environment.

Heading to Hong Kong: I was accepted on the graduate scheme at Midland Bank. I resigned from my safe job in the civil service to go into the financial sector on Black Monday (October 19, 1987). I worked for Midland, which became HSBC, in London, Southampton and then in London again.

I met my husband, Tony, when I moved to London. We’d both been at Manchester at the same time and had circles that interacted, but it was only when I moved to London that we got to know each other. We got married in 1991 and lived in Twickenham. I thought it was a place I could put down roots.

Tony had gone back and forth to Hong Kong a few times for work, and I’d visited, too. He was offered a position with Hong Kong Telecom while I was working for HSBC Insurance. I asked if there was an opportunity in Hong Kong – there was an opening and I was wanted. We came to Hong Kong in 1996, a year before the handover. It was exciting to be here. We got a flat on Robinson Road, in Mid-Levels.

Falling in love: We knew that we wanted children and decided that adoption could be good for us and also for the children. Absolute credit to the Social Welfare Department, they were thorough and not bureaucratic. They made sure they knew who we were and that the child would be safe with us and we had the wherewithal to know what we were doing.

After they’ve done all the paperwork and checks, it’s an internal process and they have a matching panel between prospective parents and children needing a home. Tony got the call from the matching panel saying they had a baby boy who might be suitable, “Do you want to meet him?” “Yes.”

It was love at first sight, complete and utter love. I bonded with Jamie the moment I saw him, he looked into my eyes and I looked into his and we both knew that we were meant for each other. He was such a gorgeous baby. He was born in 2001, close to my 40th birthday, and he was three months old when we brought him home.

I spoke to the (HSBC) HR director when I was going through the process and asked if there was adoption leave. She said, “I suppose there could be.” It was the same as maternity leave. As far as I know, I was the first person at HSBC to get such leave, so I had a decent amount of time with Jamie when he was a little baby. It was amazing to suddenly be parents to the most beautiful baby in the world.

Reasonably soon after, we thought we’d have another child and went through the process again. We brought Jamie with us to meet this little baby girl at Mother’s Choice. Sophie was born in 2004 and was also three months old when we brought her home. We didn’t have too many sleepless nights, they were both lovely babies.

The worst call: We moved from Happy Valley to Pok Fu Lam. They went to Kennedy School and then West Island School. Jamie was such an athletic individual, almost from the day he could walk he would run and jump. He played a lot of football and did parkour in Kowloon Park. Jamie and Sophie were both on skis at a young age.

In 2013, I’d left HSBC and was the chief operating officer of the English Schools Foundation’s Educational Services when I started having cluster migraines. I went to the doctor, who sent me for an MRI. They found a tumour and I was diagnosed with brain cancer. It was a grade 2 tumour. The surgeon was incredible. I was in hospital only about 10 days or so. The only side effect was on my peripheral vision and I went back to work after four months.

In February 2017, Jamie was 15. He’d done his GCSE mocks before Christmas and we’d been to Whistler (in Canada) and had a brilliant skiing holiday. He went out to play football and we were out when we got a call from the police telling us that Jamie had taken his life.

It was out of the blue. It was the most shocking, devastating experience that any parent can ever have, your child who is so active, engaged, and to realise, as I’ve done, processing it afterwards, that he must have been going through pain that he kept completely within himself. We didn’t see anything.

Reaching out: I stopped working after Jamie died. I had to do something, and I set up the Weez Project, to raise awareness about youth suicide and youth mental health. Not only was Jamie athletic, he was also incredibly creative. He loved graffiti and sticker art and designed stickers and got them printed and exchanged them with people around the world. Weez was his tag.

I connected with KELY Support Group and became partners with them. The Weez Project was to raise awareness and to raise funds and anything we raise goes to KELY Support for their youth programmes. One of the first things we did was go into West Island School with KELY and their Talk2Me peer support and emotional well-being programme.

Knowing there is someone who cares can make a massive difference. It may enable young people to think there is hope, that life has a lot to offer, and to think, “What can I do to make sure that I stay and make the most of my life?” I’d like to see young people have the opportunity to turn something negative into something life affirming.

I went to Mind Hong Kong conferences and met the amazing people there doing amazing work and was asked to become an adviser. I now sit on the board. I helped bring together KELY Support and Mind Hong Kong to form Coolminds, a joint initiative. It promotes mental health awareness, support and understanding in Hong Kong’s youth and those around them. It provides resources, education and training for youths, parents and teachers.

The big C: In 2018, I had a regular scan and there was a new tumour. That meant another surgery, so I was opened up again and the tumour removed. The hardest thing to get through was not the surgery but the month of radiotherapy that followed and feeling really unwell, feeling sick and dizzy and generally awful and at the same time doing chemotherapy.

The following year there was a third operation to remove another lump which turned out to be necrosis, the aftereffects of the radiotherapy, which is basically dead brain cells. Because the tumour was on the right side, I’ve lost feeling in my left arm and left leg and generally on my left side.

Get talking: Last year, I started Weez Week to mark the third anniversary of Jamie’s death, on February 17, and I’ll do it again this year (February 22-27). The theme is “talk, listen and care”. My objective is to encourage and enable people to talk about suicide. In our community, death and suicide are a stigmatised issue. It’s terribly important for young people to understand about suicide and suicidal feelings and know they are not alone.

These thoughts can be scary, and we want to encourage young people to reach out and talk about what is happening – you don’t need to live with these thoughts. People don’t like to talk about suicide, they don’t want an association in their family. We talk about it in order for it not to happen in other families.

Having tracked a hitherto unremarkable, yet very fulfilling course, what’s  happened in my more recent life path serves to illustrate just how suddenly all  that had seemed certain can change.  I have always been resilient and I hold on to my belief in self, love and hope as I continue to move forward.