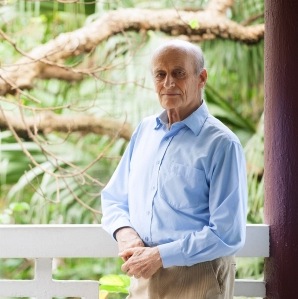 Christopher New, the former head of the University of Hong Kong’s Philosophy Department, may have packed his bags and left before the handover, but he’s still got the city under his skin. Seventeen years on and now dividing his time between Berlin and Bangkok, he’s still writing about the place he called home for 30 years.

Gage Street Courtesan was inspired by a real-life murder-suicide in Hong Kong. It was New’s friend the late historian Carl Smith who drew his attention to the unusual case involving a German-speaking “European single woman” – a euphemism for courtesan – and her lover, a German sea captain.

One evening in 1883, in an apartment on Gage Street, the woman, Francesca Berger, was singing for the sea captain. It was apparently a convivial atmosphere and there were servants about when the captain pulled out his pistol and shot his mistress and then turned the gun on himself. The motive was a mystery.

“Well, of course that intrigued me,” says New. “I wanted to know what could have been going on in Hong Kong at the time that brought about this tragedy and I thought there must be a novel here. Having written novels about Hong Kong in the 20th century, I thought that something earlier would be interesting.”

Unlike his later novels, New didn’t need to do much research for The Chinese Box because the events were unfolding around him. He’d arrived in Hong Kong in 1966 to take up a post at the university, travelling by Dutch cargo ship.

“I got here just in time for the Cultural Revolution,” he quips. “One morning on the ship the radio officer came down to breakfast waving all this stuff and said, ‘There’s some sort of revolution going on in China, Hong Kong won’t be there when you arrive’.”

Planning to stay just a couple of years, New arrived at a time when the university’s philosophy and psychology departments were combined. Two years on and the disciplines split to form separate departments, by which time he’d taken to life in Hong Kong. He stayed until 1996 and his children were born here and educated at the German Swiss International School.

“In the early days, there were four philosophy lecturers and the students started calling us the ‘Gang of Four’ and then it moved up to five and they still called us the Gang of Four,” he says.

New, who studied at Oxford and Princeton universities, has juggled writing projects throughout his career, switching back and forth between fiction and philosophy.

“When I’m writing philosophy I finish something and turn to fiction with a sense of relief and that’s a completely different thing and I get on with that. And when I finish the fiction, I come back to the philosophy and think, ‘Ah, that’s a relief, it’s something clear-cut’.”

Although Gage Street Courtesan is inspired by a real-life incident, the plot is entirely fiction. Working backwards from the murder, he tried to reason what a German-speaking woman was doing in Hong Kong at a time when there were few Germans in the territory.

Researching the demi-monde of late 19th-century Hong Kong, he discovered that there was a small but significant global trade in Jewish girls from the Austro-Hungarian province of Galicia. Years of political unrest and economic downturn meant that many of the Jews in Galicia were starving, a situation exacerbated by the fact that many of the men had migrated.

“There was a supply and there was a demand – in Europe and the Far East – for women in brothels, so a trade grew up,” says New, adding that the women were trafficked from Galicia as far as Rio de Janeiro, Buenos Aires, Alexandria, London, New York and, once the Suez Canal was opened in 1869 to the outposts of the British empire, to Shanghai, Bombay, Calcutta and Hong Kong.

New estimates that 700 to 800 Jewish women were trafficked into Asia with about 100 pimps or procurers managing them. In terms of the global trade in women the numbers were small, but what it did do was fan the flames of anti-Semitism not only in Europe but in other parts of the world.

Could Francesca Berger have been one of those women? That story has probably gone to the grave, but New weaves an elaborate one for his protagonist, Franziska Goldmann – an opera singer fallen on hard times, her dream of resuming her singing career gets fresh hope after a chance encounter with the Queen’s musical second son who is visiting Hong Kong.

Her lover, the German sea captain, is portrayed as an opium-addicted, charming no-hoper.

The novel is rich in detail and New paints colourful scenes of bustling streets jammed with market sellers, rickshaw drivers and hawkers. Those 19th-century buildings may have long since been replaced by post-war tenements, but the network of lanes around Gage Street remains the same – a bonus for readers familiar with the area.

New even permits himself a little poetic licence and positions a banana seller at the top of Gage Street, just as there is today.

New isn’t ready to turn his back on Hong Kong. He still visits regularly and is working on another Hong Kong novel, although he’s reluctant to give too much away.

“It starts on June 4 in one year and ends on June 4 in another and in between stuff happens – that’s all I can tell you about it now,” he says.