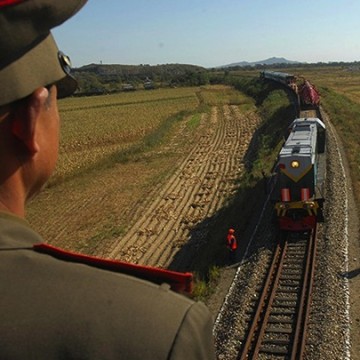 Tomas Novotny has been in North Korea two days, and he looks frazzled.

It was a long journey from Prague, and standing on the street in downtown Rajin, his government minder by his side, he can already see that doing business in the DPRK’s remote northeast will present an unusual set of challenges.

The area is Rason–an amalgamation of the names of the area’s two largest cities, Rajin and Sonbong–and it was the first of North Korea’s special economic zones, established in 1991 after the fall of the Soviet Union. While it is the region’s northernmost ice-free port and has plenty of cheap labor, it languished for almost 20 years, a result of indifference from Pyongyang and its challenging geopolitical situation, but the tide has finally turned.

Spend five minutes in Rason and it’s obvious where most of the money comes from–the place looks like a giant Chinatown: Every third car has a China number plate and dumplings are on the menu. A new 50km road linking Rajin with Hunchun in neighboring Jilin Province opened a year ago with Chinese funding. (Overall trade between China and Rason is estimated at about $6 billion.)

Russia, which is so close you can see it from Rajin port, completed a massive overhaul of a cross-border railway line in September. After a year in Rason the Russian workers at Pier 3–Rajin has three–are preparing to return home, their mission completed: The line from Khasan in Russia to Rajin port means Russian Railways can increase international container shipments. Russian investment in Pier 3 and the surrounding area is estimated to be 2.2 billion rubles ($66 million).

Novotny is here because of that railway line. A brewing technologist with the Czech firm Zvu Potez, he has come to set up a brewery. All the equipment and materials were transported by train–from Prague to Moscow, through Siberia and onto the branch line of the Trans-Korean main line. “We’re still building the brewery. Come and see it,” says Novotny. The two containers that brought the Zvu Potez equipment from Prague lie 50 meters from the brewery. It’s a great location by the sea in Rajin’s main park. The business is a joint venture between the Czech firm and the Rason regional government, says Novotny, and will target tourists and foreigners. There are about 300 Western tourists–including Russians–a year and about 20,000 Chinese visitors to the country’s northeast.

“When they’ve finished building,” he says, shouting over the drilling, “I’m going to teach three or four locals how to brew. I hope they can speak English. If they can’t it will be interesting.”

He expects to be in Rason for six months establishing the business, but already he misses home and his young son. “I won’t get to speak to them until I go home at Christmas,” he says.

North Korea’s telecommunications challenges are a headache for business, too. Foreigners are able to get 3G on their phones, but it is expensive. International calls are possible but equally pricey.

“When telecommunications become a little more open that will indicate the seriousness of purpose,” says Andray Abrahamian, who directs Choson Exchange, a Singaporean nonprofit that focuses on business and legal training for young North Koreans in the DPRK. Abrahamian has been watching North Korea for a decade and visited Rason several times. He says things are finally moving, a result of legal changes made in 2010 that helped make Rason more autonomous. Further legal changes two years ago were intended to harmonize Rason’s economic laws with those of China, he says.

“Rason is a directly administered city under the authority of Pyongyang. It is not under a provincial government,” says Curtis Melvin, a researcher at the U.S.-Korean Institute at Johns Hopkins University.

However, it is also under the wing of a body tasked by the country’s ruler Kim Jong Un with managing investments and joint ventures in North Korea. In October Pyongyang made clear its plans to set up more special economic zones and created a new body charged with looking after SEZs, the Korean Economic Development Association.

“The degree to which it will allow autonomy to the regional decision makers or local planners has yet to be seen. That’s a key issue for Rason–how autonomous are these places really?” asks Abrahamian, 36.

Choson Exchange was founded in 2007 by Singaporean Geoffrey See, then a Wharton School undergraduate, who was fascinated with the Cold War and determined to help North Korean professionals integrate with the rest of the world.

A drive through Rason under tourist cover reveals some sizeable construction projects. There are apartments going up, a bank being built and a new mixed-use commercial/retail/residential facility under construction. Access to Rason is easier for foreigners than anywhere else in North Korea, especially for Chinese who don’t need a visa and can enter on a travel permit.

Not all the factories are new. The Rajin Garment Factory was built in 1958, long before talk of special economic zones. In the early days it produced school uniforms for North Korean students. After 1991 it took orders from China and today employs 180 staff.

The factory manager stands on the front steps. It’s early evening, and he’s watching a staff volleyball game in the car park. Has business improved since Rason was made a special economic zone?

The workers, nearly all women, are given housing and paid 600? to 700 won a month, plus overtime, he says. Inside the factory, on the first floor, close to 100 women are clocking overtime. Wearing blue uniforms and matching head scarves, they are sewing puffer jackets, hurrying to complete a big order. The final step of the process is to sew in the label: “Made in China.”

The tag is written in English, and the woman packing the jackets doesn’t understand the visitors’ raised eyebrows. Apparently this is a common practice. It’s noisy on the factory floor. The popular all-girl band Moranbong blasts out of speakers, drowning out the whir of sewing machines. It’s impossible to hear the drone of the generator, switched on after yet another power failure, a regular feature of life in the DPRK.

There is a deal in place to bring power from Jilin Province, but the Chinese have been holding it up using the pretext of an environmental impact study.

More Chinese power can’t hurt, says researcher Melvin, “but there are many more substantive problems the North Korean ?must ?overcome before serious large-scale investment can move into the country. The DPRK cannot currently credibly commit to any policy–no policy stability, rule of law–and has a poor record of honoring its agreements and impartially enforcing contracts. No independent company will risk serious capital in this environment.”

Another matter is fuel. Joseph Naemi is director of HBOil, an oil trading and refining company based in Ulaanbaatar, Mongolia. HBOil grabbed a few headlines in June when it was reported the firm had acquired a 20% stake in Sungri oil refinery in Rason. That was premature, says Naemi: HBOil has 20% of a state-dominated joint venture called Korean Oil Exploration Corp. International, and a formal commitment with Sungri has yet to be made. Another option is to invest in a refinery on the west coast of the DPRK.

“The easy option is Sungri oil refinery because it’s based on Russian technology and because of its location in terms of the dynamic state of affairs in Rason Special Economic Zone. We are conducting engineering assessment of the refinery to determine the various phases of upgrading and expanding–it’s a work in progress,” says Naemi.

Describing Rason officials as well educated and smart, he says they understand issues of foreign investment protection, taxation and the need to not only be fiscally transparent but also to offer attractive terms to investors.

“I know a number of Mongolian companies, all privately owned, that are at various stages of either investing in North Korea or finalizing their joint ventures so that they can invest. There is a robust relationship between Mongolia and North Korea,” says Naemi.

The Mongolian president visited Pyongyang at the end of October. Although a number of economic and cultural agreements were signed, Kim Jong Un didn’t see him, the snub suggesting the red-carpet treatment is reserved for China and Russia. A significant overture was made to the bigger neighbors at this summer’s Mass Games with a 5-minute segment at the end of the 90-minute Arirang performance dedicated to friendship with China and Russia.

For anyone doing business, there will be surprises. Standing on the terrace of the new brewery, Novotny looks out at the recently planted lawn. The seeds have been planted in rows, five centimeters apart, all the way down to the sea. Come summer and the warmer weather, the grass should have taken. It stands to be a great spot for a bar.

“Yeah, if we’re still open,” says Novotny and laughs. He drops his voice and out of earshot of his minder adds: “Look at the grass, see how it grows in such straight lines. Things are different here.”