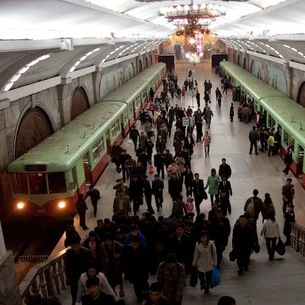 Visiting the capital Pyongyang is a surreal experience. Many visitors don’t know what to believe

It can throw visitors into a bizarre, dreamlike state for days — sometimes the entire trip.

Strange sensations — and paranoid thoughts — are so common they’re covered in orientation sessions offered by Koryo Tours, which leads trips to North Korea.

“Your hotel room will not be bugged, but if you want to believe it’s bugged — to have a sexy story to tell when you get home — then go ahead,” says Koryo Tours general manager Simon Cockerell.

Cockerell has made more than 125 trips to the Hermit Kingdom and says the most common question asked by visitors is: Where are the people going?

The streets of the capital aren’t crowded like Hong Kong or Beijing, but there are plenty of people out and about.

So, where are they going?

The question arises from a suspicion that they’re going nowhere. After all, where could they be going in a country as supposedly stunted as North Korea?

From here it’s a short step to assuming the people are actors, that the city tour is being carefully staged. 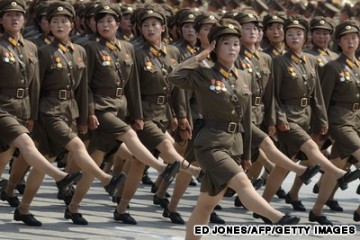 As the sense of the bizarre takes hold and paranoia seeps in, there comes a sudden realization: “I must be on the set of the DPRK’s ‘Truman Show.’”

For Briton Mathew Durling, who visited Pyongyang for the first time last month, the trip was eerie from start to finish.

Trying to pinpoint what gave the otherworldly edge to the trip, he says it’s something to do with the lack of advertising and the way North Koreans dress and move.

“Most cities are defined by consumer culture, but in Pyongyang there is no indication of the shopping areas,” he says. “And it’s the uniformity of their dress — the men all in long pants, the women in conservative clothing — and that they even seem to walk at the same pace, it adds to the surreal effect.”

Then Durling asks the familiar question: “There are a lot of people walking around at all times of the day, but where are they going?”

Tours of the capital are choreographed affairs.

A few tour guides/government minders are assigned to every tour bus to ensure visitors keep to the permitted route, but there’s no way the North Korean government would — or could — spend millions of dollars and employ a cast of thousands merely to deceive a busload of tourists.

Still, for some visitors it’s a hard notion to shake.

Where could all these North Koreans possibly be going? It’s all just a little too random, don’t you think?

The Metro invariably comes in for close scrutiny.

Tourists often look at commuters closely, trying to work out where they might be going and gauging whether or not they’re actually actors.

For Canadian tourist Amanda Eagleson, a visit to the Grand People’s Study House left her wondering: “We were shown into different rooms — the library, a classroom, a computer room — and it felt staged, as though people had been told to be there at certain times of the day.”

On her first visit to North Korea, American teacher Elaine Leavitt had similar reservations about the Study House, but it was the Kumsusan Memorial Palace — the mausoleum for Kim Il-sung and his son Kim Jong-Il — that blew her away.

“Walking over the foot cleaners and getting air blown over our clothes so we would be clean when we bowed around the Kims, and then seeing all their material possessions and the money that’s pouring into that place that could be used to feed the starving people — it was the epicenter of the cult of North Korea,” says Leavitt. 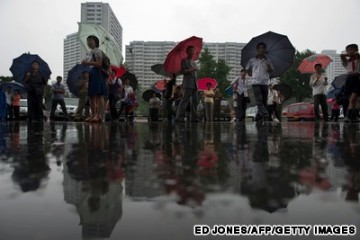 Despite the strict protocol surrounding her visit to the mausoleum, she was surprised by the relative freedom she had on the tour.

“I thought there would be way more cameras around, people watching us and following us down the street like spies,” she says. “There might have been, there probably were, but I thought it would be much more in your face.”

Visitors to North Korea come with preconceived ideas about the isolated state, much of it shaped by the media and popular documentaries.

New Zealand tourist Will Seal watched the “Vice Guide to North Korea” ahead of his first visit.

“Watching that creates a certain impression in your mind, but all the weird elements that you see — the propaganda, the pictures of the leaders everywhere, the army on the streets — you can see those things in other countries, too,” says Seal.

“In Thailand there are pictures of the royal family everywhere. I felt like a lot of what we’d heard was overhyped.”

After a decade of going in and out of the country, Cockerell is an old hand on North Korea. He’s seen the Truman-esque symptoms that afflict visitors enough times to recognize the symptoms and puts the condition down to something he calls the “banality of normality.”

“When you go to North Korea you expect to see goose stepping and marching up and down and that every statement will be wildly anti-American and then you see someone fishing or on the Metro and you think, ‘it’s a setup, no one actually goes fishing or just sits on a bench,’” says Cockerell.

As for everyone walking at the same steady pace, he puts that down to years of training.

Children are made to line up outside school, they march as one, and if one person is a foot in front or behind then someone might trip.

North Korea is a society that places great emphasis on the group, he says.

North Korea’s ‘best’ actors So, finally, the answer to the burning question: Where are all the people going?

“How the hell should I know?” says Cockerell. “They’re not going to an Internet café or a nightclub.

“They could be going somewhere very normal — to work, to the shop, to see a friend — the range of options is perhaps less than in other cities, but they’re not all going to anti-American rallies.”

And if that answer fails to convince the tourist with a severe case of Truman-esque surreal, then he has another line that usually helps pull them out of it: “Turn on the TV and watch it for a while — you’ll soon see they’re not very good actors.”