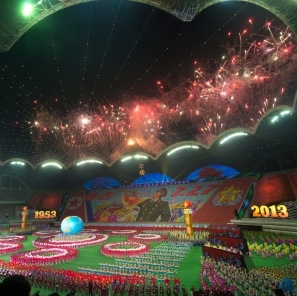 Pyongyang, as the capital of a desperately poor nation ruled by a military dictatorship, isn’t exactly famous for its nightlife.

But while in the Hermit Kingdom on a weeklong tour recently, we reason there has to be some kind of entertainment available after dark. And when we hear rumours of a nightclub called the Taedong Diplomatic, we simply have to go.

“The Diplo?” says Simon Cockerell of Koryo Tours, which specialises in trips to North Korea. “It’s not what you’re expecting. You won’t get swanky diplomats hanging out at the bar. It’s nothing glam.”

Still, we aren’t put off, even when we hear the nightclub apparently possesses only one CD. We know the Diplo will be bad, the question is how bad.

Tour group travel is the only real way to see North Korea and it’s not the place for individual requests. The itinerary is carefully choreographed: wander too far from the group, step over that invisible line, and a North Korean guide will be there to guide you back.

So popping out of the hotel in the evening is out of the question. Forget the Diplo, we are told. It will cause a diplomatic incident if one member of the group goes missing. If a trip to the only club is to happen we’ll need to persuade enough members in the group and have the blessing of our guides. 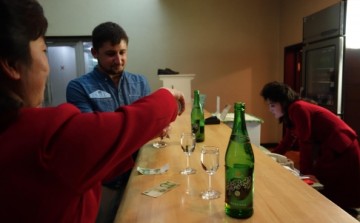 There is, of course, one massive show on in Pyongyang and it’s running until September 8. This year the Arirang Festival “mass games” are even bigger than ever with plenty of new material added to mark the 60th anniversary of the signing of the Korean war armistice, celebrated by the North Koreans as a victory.

We attend the performance on Victory Day and sit a stone’s throw from where Kim Jong-un and his generals sat the night before. The show kicks off at 8.30pm with 20,000 “human pixels” – schoolchildren flipping through books of coloured cards – and we are five minutes in, the Arirang love story on the verge of unfolding, when we are plunged into darkness. Power failure.

Power outages in Pyongyang are a daily occurrence, but one at such a high-profile event is unusual. The audience waits in silence. The thousands of performers creep back to their starting positions. Five minutes later – a faster recovery than the Super Bowl power outage earlier this year – the show is on and it is an incredible spectacle with 120,000 gymnasts, acrobats and dancers giving their all.

But once you’ve seen the mass games – or even seen it twice, as some in our group opt to do – then what? Anyone wondering about what to do when the sun goes down in Pyongyang needs to realise you’re not going to be hanging out with the locals. There is the occasional opportunity to rub shoulders with North Koreans, perhaps even attempt a little small talk on a train, but socialising is definitely not on the cards.

Your guides are the only North Koreans you will get to know. They’re not the ghastly minders some like to make out, they’re just men and women doing a job, charged with making sure we don’t poke our noses into something deemed unsuitable. If we do, their job is on the line.

Given the restrictions, it’s no surprise to discover Pyongyang’s nightlife is centred around the big hotels. New Zealander Haydon Howlett and his friends soon work out that the bar will stay open as long as they’re there. “Pyongyang has one of the most active hotel bar scenes in the communist bloc – there was always a contingent of us going until at least 2am or whenever the elevators stopped,” he says.

Our first hotel in the city – the Ryanggang Hotel – has a revolving restaurant-cum-bar at the top, but it’s a disappointment. It’s not just the plastic flowers, neon lights and balloons, or even the fact it struggles to complete a 360-degree revolution. It is the complete lack of atmosphere that kills the place. Still, Howlett and his buddies give it a go.

“After we got told that two people from the last tour got stranded in the bar all night when they shut down the lift – and there were no stairs – it was hard to relax up there,” he says.

We get luckier with the Yanggakdo, on a small island in the Taedong River, and the most happening hotel in the city. The guides seem more relaxed, perhaps knowing we can’t wander too far – we are, after all, on an island.

The Yanggakdo boasts a 47th-floor revolving restaurant, casino, bowling alley and a couple of bars. The drinks are cheap – a beer is about 50 US cents – and it’s a good place to unwind after a trip to the DMZ, but no one is overly impressed, not least visiting music editor Will Seal. “The grime on the windows, the lack of power to most of the city’s lights, and the constant threat of being trapped in the bar during an all-night power cut were the only downsides to enjoying the view,” he says.

We’re still holding out for a chance to sample the city’s only nightclub, and we get our lucky break on the last night. A fun fair visit is scheduled for after dinner. Amusement parks are a big deal in the North Korean capital. During the past two years, three new parks have opened and two of the old ones have been renovated. This is where the locals go to have fun. Except that when we arrive the place is in darkness. Another power failure. We check out another one, same deal – which leaves the door wide open for the Diplo. Almost everyone is in.

The Diplo is a big complex with a large main bar, a snooker room and plenty of private rooms for karaoke and drinking. Three solitary drinkers at the bar look up as we enter. If the place still has that one CD, they’re not playing it. At the back of the room a soccer match is kicking off on a big screen. Cockerell is right about the lack of glamour. We skip the bar and take one of the large, private karaoke rooms – in Pyongyang, you make your own fun.

This is a chance to kick back with the guides and get to know them better – and their taste in music. The North Koreans like songs with audible lyrics, a clear message and a nice melody to sing along to. “Early Beatles, the Carpenters and John Denver – anything where the subject matter isn’t dark, that’s got a chorus goes down well. They haven’t had an evolution in popular music over time, so there’s no deep house, no electronica,” says Cockerell.

At the end of last year, Cockerell brought in the first western DJ to play Pyongyang: Brian Offenther, aka DJ BO. He began with a Little Richard song, Get Down With It, which got the foreigners dancing – but not the North Koreans. It wasn’t until he put on The Village People’s YMCA that the local crowd took to the dance floor.

Although Pyongyang doesn’t have a live music scene, most people, especially the middle class, can play a musical instrument. “If you have five people – someone with a guitar, an accordion and a drum – you are a band so they create their own live music like that. They sit outside in the park and play, at family things. Everyone knows the same songs,” says Cockerell.

And no one is shy about singing. Another New Zealander, Jeremy Kenealy, is surprised at how easily North Koreans are persuaded to stand up and belt out a song. “Given any opportunity, they will sing a rendition of Arirang with skill and passion, with or without music to accompany them,” he says.

The latest big thing on the North Korean music scene is the all-girl band Moranbong, the five members apparently hand-picked by Kim Jong-un. Unlike the 1990s Spice Girls, these singers sport similar hair and outfits – individualism is not encouraged. They play a mixture of pop, light rock and classical, and are the closest North Korea has to celebrities – after the Great Leader, of course.

The drinks at the Diplo are flowing and when someone suggests a group sing-song the tune that is punched into the karaoke machine is Hey Jude. Our guides are the first to jump up.