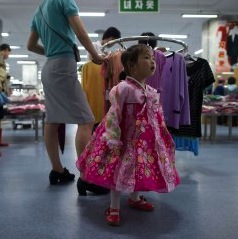 The city of Pyongyang may conjure up images of Mass Games and goose-stepping sentries, but the North Korean capital looks very different from the place it was 10 years ago.

It’s not just the new high-rises, even the people appear different — many are toting mobile phones, and women dress in high heels. As implausible as it sounds, signs of a small middle class can be seen.

Of course, that is exactly the side of a brutally repressed, deeply impoverished country that the government wants foreigners to see. The authorities go to great lengths to ensure tourists keep to a well-marked trail. But even through this very narrow prism, there is no denying that material life in the capital, at least for the lucky ones, is getting a little less harsh.

“The change has been most obvious over the last couple of years,” says Simon Cockerell of Koryo Tours, who has made more than 100 trips into North Korea over the past decade. As the regime seeks to buttress support, it has allowed life for some groups to improve. “There is more stuff to buy,” Cockerell says. “There were always clothes available, but now there are nicer and better clothes.”

Change began in the capital a decade ago with the opening of the first Tongil market hall in 2003. Tongil (“Reunification”) sells agricultural produce, clothing and simple electrical goods, and satellite imagery shows these distinctive blue-roofed markets expanding to different locations in Pyongyang and beyond. The markets are strictly off-limits to foreigners and only accept local currency, which tourists are not allowed to use.

For the elite, there are department stores. There are about 10 in Pyongyang and others in the provincial capitals. These stores only accept hard currency such as U.S. dollars, euros or renminbi, and are stocked with imported goods, mostly from China. (MORE: Choco Pie Withdrawal — North Koreans Crave Their Favorite Treat)

The two-story Taesung Department Store in Pyongyang is typical. Built in 1986, it was revamped a few years ago, and although the displays look dated by global standards it is well stocked — for those who can afford it — with food, cosmetics, hardware and furniture on the ground floor and clothing, toys and bedding on the upper floor. A blouse goes for about $20 and a comforter costs $50. (Average annual income is about $1,200.)

Almost all the goods are made in China. Curtis Melvin, a researcher at the U.S.-Korea Institute at Johns Hopkins University, says North Korean consumers are forced to be canny shoppers out of necessity. Without access to reliable product data or consumer protection, they make decisions based on scanty information and experience.

“When it comes to buying durable goods in particular, the country of origin is an important proxy for quality. South Korean and Japanese are the best. Chinese is better than North Korean.” In broader terms, Melvin says interest in foreign fashions and culture “indicates that North Koreans do not believe the propaganda their leaders tell them, particularly about life in South Korea.” Though banned, South Korean films circulate widely if covertly on DVD, and some North Koreans living in border areas can access Chinese and South Korean TV.

Escorted by official minders around the clock, foreign visitors to Pyongyang don’t get to see any scenes of deprivation. The government would instead rather that tourists came away with impressions of the supermarket on Changjon Street in downtown Pyongyang (stocked with Italian wines, Coca-Cola and Hershey’s Kisses) and the handful of fast-food restaurants that have opened in recent years (there are burger bars, pizza parlors and a KFC-style fried-chicken joint). On Kim Il Sung Square, there’s even an Austrian-style coffee shop.

The reality, of course, is that many North Koreans are still struggling to get enough to eat — never mind a cappuccino. There are regular reports of famine, and the majority of North Koreans will never visit the capital, only knowing of it and its attractions from carefully stage-managed television reports. In quality-of-life terms, the gulf between the residents of Pyongyang and those outside it is vast.

And even in Pyongyang, “consumerism” is a subdued affair. There is very little advertising, with just five billboards in the capital, all of which are owned by the Pyonghwa Motors Company. Popular local brewery Taedonggang Beer briefly ran an advert on TV, but it has since gone off air.

“Some advertising exists, but it’s not the overwhelming sensory experience that you have anywhere else,” says Cockerell. “Most shops don’t have signs, or if they do they are small, subtle ones rather than a big emblazoned sign.”

Melvin observes that public advertising is still taboo and stresses that although economic conditions are improving in Pyongyang and inflation appears to have stabilized, the realities of everyday life remain grim — however many phone-toting, high-heel-clad women a visitor may see on the streets of the capital.

“Economic and bureaucratic inefficiencies still abound and corruption has run rampant,” he says. “Human rights are still not respected in the DPRK and people are not free to travel, speak or pursue their lives as they see fit.”